The paradox of the Donald Trump administration may be that its assault on civil liberties, immigrant rights and the environment has spurred an artistic renaissance, an outpouring of expression in opposition to White House policies. At least that's what Megan Walsh has been seeing. 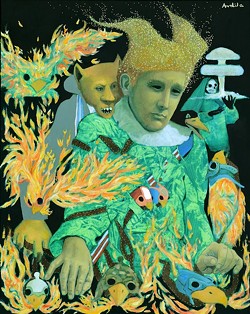 "After the election a lot of people wanted to create art about how they were feeling," Walsh says. The 29-year-old's day job is program specialist for the Charlotte Arts & Science Council's Culture Blocks program. In that capacity Walsh works to bring arts, science, history and cultural programming out to the city's diverse communities, but she reaches yet another constituency — Charlotte's Arts community — as organizer and facilitator of Resist: An Activist Art Show. Designed as a showcase for resilience and advocacy through the arts, the exhibit goes up Friday, May 4, at C3 Lab.

"There will be a lot of original pieces — paintings, drawings, sculpture and mixed media," Walsh promises. "We'll also feature poetry and a dance piece." She says turnout from the arts community has been overwhelming, and that submissions are still pouring in. All told, she predicts the show will include 45 pieces and performances. The OBRA Collective, of which Walsh is a founding member, is presenting Resist.

The collective's name is a play on words, Walsh explains. Obra in Spanish means "a work," or "a piece," as in a work or a piece of art, while the English language definition of OBRA is an acronym for "observe, bridge, respond, and art," she says. The collective fosters and features work by immigrant and undocumented artists and their allies, art that illuminates the immigrant experience and highlights voices that frequently go unheard. When OBRA launched in 2013, Walsh was the youth development coordinator for the Latin American Coalition. 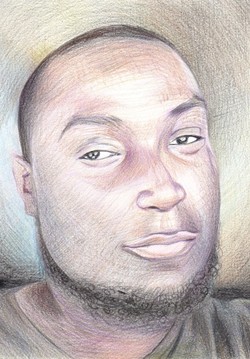 "I was working with high-schoolers and teens when the Democratic National Convention came to town," Walsh remembers. "A cool group of artists from across the country came through on what they called the UndocuBus." Walsh's young charges were fired up by the UndocuBus riders' workshops, and after the convention they asked Walsh why Charlotte didn't have something as cool as the programs offered by the visiting activists.

Walsh's reply was simple and direct. "I said we should start our own group that will do stuff just as cool," she says. So OBRA was born, and Walsh has been active in the collective ever since. The group has presented workshops, including a presentation on Deferred Action for Childhood Arrivals (DACA), and art shows, most recently Made in America, an exploration of the immigrant experience held on May 20 of last year.

What makes Resist different from previous shows is its scope. For this exhibit OBRA has cast its net beyond just the Latin community and its allies. 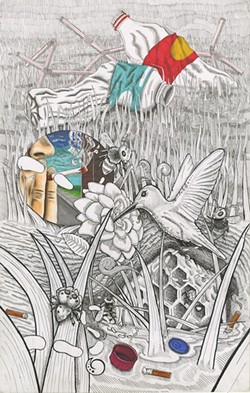 "The idea is to open the door to other artists — and not just people who are familiar to the collective," Walsh says. Past shows have been dominated by wonderful Latino artists, she continues, but now OBRA is eager to see what kind of artwork other people will create under the banner of "Resistance." So far, pieces focusing on the environment and immigration have been two of the more popular themes among the submissions.

"The other big theme that has stood out this year is police brutality," Walsh says. That's the focus of Beth D. Mussay's small portraits of several people who have been killed by the police. Subjects of the artist's character studies include Keith Lamont Scott, killed by Charlotte police, and Aiyana Jones, the 7-year-old Detroit girl who was killed by police while sleeping on her grandmother's couch, Mussay says. 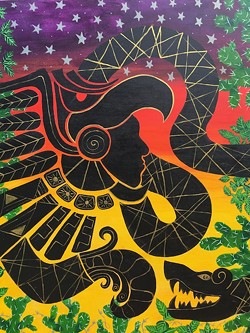 Power politics and mythology collide in Luis Ardila's "Phaethon." The title character, the son of the Greek Sun god Helios, was granted control of the sun chariot, but he could not restrain the powerful eagles and horses that pulled the vehicle. With the earth in danger of being destroyed by Phaeton's recklessness, Zeus was forced to strike down the chariot with a thunderbolt, which also killed Phaethon. It's a lesson that great power should carry responsibility, Ardilla says.

"Currently our society is on a wrong path that leads to an abyss of chaos, arrogance and greed," Ardilla cautions.

Mexican mythological figures in Zuleyma Castrejon's acrylic painting "Neither the Eagle Nor the Serpent Respects Borders," which depicts an eagle with a serpent in its mouth.

"I wanted to speak against Trump's wall [and] start a conversation about how borders divide us," Castrejon explains. "Simultaneously, I wanted to celebrate the resilience of my Mexican people. Being Mexican is a state of soul, neither eagle nor serpent, but both. And like the ocean, neither animal respects borders." 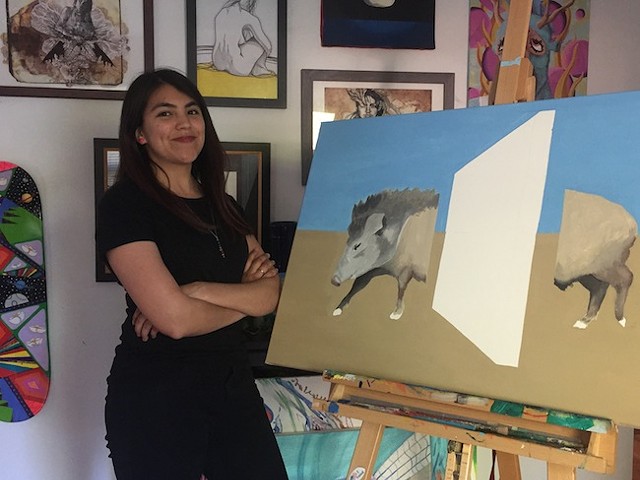 Trump's proposed border wall also informs Walsh's "I Resist Borders," a painting which depicts a javelina [a Mexican peccary] divided by a wall.

"The wall has disrupted the natural ecosystem," Walsh says. The border, she continues, has wreaked havoc with migration routes used by animals like the javelina.

Resist will also feature sculptures such as "Disgusting" and "Such a Nasty Woman," ceramic undergarments created by Doris Kapner to critique the current president's misogyny and the sexism which has spawned the "Me Too" movement; and the song "Femenina Divina," a celebration of feminine energy that will be performed by Kali Ferguson.

Many of the artists will be present at the show's May 4 opening to discuss their works. Charlotte Center for Legal Advocacy's Oliver Merino will also be on hand to discuss and disseminate information about 287(g), the controversial program that authorizes the Department of Homeland Security to deputize selected state and local law enforcement officers to enforce federal immigration law. The program has had a devastating effect on the Latin community because it has ripped families apart, Walsh says, and fostered widespread distrust of the police among the public.

With its mix of art, political activism and useful information, Resist seems to be on track to be a clarion call for action among the Latin community, the arts community, and beyond.

"We're always looking for new people to lead workshops for us," she continues. "It will be cool to meet artists and other people who are passionate - because people wouldn't have submitted [to this show] unless they felt strongly about the issues."