A win for whistleblowers?

Activist groups applaud 'Ag-Gag' veto, but are still being targeted 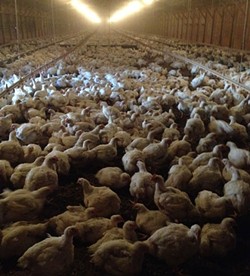 Animal and workers' rights groups applauded Gov. Pat McCrory's decision to veto House Bill 405, also known as the "Ag-Gag bill," on Friday, but the relief may be short-lived, as a rewrite of the same bill looks to be all the Governor wants from legislators.

In a statement from McCrory following the veto on Friday, he makes it clear the original bill is not dead, and he wants activists to answer for videos like one recently released by animal advocacy group Compassion Over Killing that shows severe mistreatment of chickens in appalling conditions at a Robeson County slaughterhouse.

"This bill is intended to address a valid concern of our state's businesses — how to discourage those bad actors who seek employment with the intent to engage in corporate espionage or act as an undercover investigator. This practice is unethical and unfair to employers, and is a particular problem for our agricultural industry. It needs to be stopped," McCrory said.

He went on to suggest that legislators send back another bill "as soon as possible" that includes protection for "honest employees" who uncover illegal circumstances in the workplace. He also said those honest employees would need to report "directly and confidentially" to law enforcement, as opposed to posting footage online or submitting it to a media outlet. McCrory made it clear he still wants to pass a bill prohibiting the filming of bad business practices by those who enter a company with the intent to do so.

"I stand ready to work with legislators during this process, and I am very optimistic that we can reach a solution that addresses the concerns of our North Carolina employers while still protecting honest employees," he said.

Carol Brooke, staff attorney with the North Carolina Justice Center's Workers' Rights Project, said she is relieved to see the bill vetoed, but skeptically so.

"We'd like to see this bill go away entirely but I think, even with this narrowing (of who could be considered a violator) he's proposing, there would still be problems with it," Brooke said. "The broader concern is that people who do take employment for the purpose of uncovering illegal activity should be protected."

In an interview before the bill was vetoed, Brooke commended the acts of whisteblower activists who uncover illegal and harmful practices happening behind closed doors.

"My thought is that there can be a role for people to take employment to uncover abuses and that is not a negative thing," Brooke said. "We want to know if our food is safe, our workers are being fairly treated and health and safety laws are being followed. Those aren't things that stand-up employers should be worried about people coming in to expose."

A law like the one McCrory is asking for would still hold activists like the one who filmed footage at Mountaire Farms in Robeson County this spring financially liable for any damages and attorney fees resulting from the footage being released because the activist gained employment with the intent of filming business practices. If language from the original bill stays in the new one, the activist could also be sued for up to $5,000 per day that he or she filmed for "exemplary damages."

In the Mountaire Farms video, plant employees playfully tear feathers out of a living chicken and throw them at each other; throw sick, dying chickens into a pile of other dying and dead chickens; and forcefully throw living chickens onto hooks to hang upside down on a conveyor belt and eventually have their necks sliced.

As with all of its videos, Compassion Over Killing turned the footage over to the Robeson County Sheriff's Office while also publishing the footage on its website, which goes against the bill McCrory is recommending.

'Ag Gag' laws, or laws that prohibit filming in farms, have been popping up through the country and are mainly based on a model built by the Republican thinktank American Legislative Exchange Council. The laws have been passed in Iowa, Utah, Idaho and Missouri and more have been struck down in state legislatures across the country. North Carolina's law, however, would take the "Ag" out of "Ag Gag," prohibiting activists from filming illegal or harmful business practices in any place of employment.

The original bill was sponsored by four North Carolina House representatives, including Rep. Rodney Moore of Mecklenburg County, and passed through the state House and Senate with little resistance before being presented to the governor on May 20. Sen. Josh Stein had proposed an amendment to exempt anyone filming illegal activity from being liable for damages, but the Senate refused to vote on the amendment. Following the veto, Stein said McCrory's statement didn't cover his amendment.

"My amendment would have protected anyone who uncovers illegal activity no matter where it came from," Stein said. "(McCrory) took a more narrow approach, but it's a step in the right direction."

In an interview before the veto, Representative John Szoka, one of the original bill's sponsors, said it was designed to protect businesses from property theft, including data such as health records and credit card information.

"It is definitely not my intent to prevent people from reporting things that are illegal or bad practice," Szoka said. "Our current property protection laws aren't strong and I thought we needed stronger laws against corporate espionage and data theft. It's targeted at very specific trespasses, not something thrown out there that covers everything."

Szoka pointed to a section of the new bill that states it does not diminish standing whisteblower protection laws (Article 21 of Chapter 95 and Article 14 of Chapter 126 in N.C. General Statutes).

It's this section McCrory wants lawmakers to word more clearly in a newly written bill. Szoka said the bill was not targeted at employees who "stumble upon something bad happening," but at activists who want to supply videos to media outlets.

"If you work for a business and you see something that is obviously wrong, nothing prevents you from being a whistleblower," Szoka aid. "You go to the proper channels. Instead of going to the closest media outlet, you go to the proper authorities. The [United States Department of Agriculture] has inspectors at most plants. They are tightly controlled, so you bring it to those authorities."

In another video released by Compassion Over Killing in 2014, filmed at a Harnett County, North Carolina chicken farm, a female worker who applied for the job specifically to uncover animal abuse looks on and secretly records as a man on the farm shows her how injured and dying chickens are disposed of. The man pours living chickens into a mass grave full of decomposing bodies and says "Mother Nature will take care of the rest." He describes the bottom of the structure, which is dug deep into the ground, as a "soup" and jokes about the smell in the summer. He scoffs at the activist's suggestions that they kill the chickens before placing them in the grave. The footage shows birds unable to walk due to deformities caused by genetic manipulation and birds suffering severe ammonia burns due to contact with their own waste.

No USDA inspectors appeared in the video. The footage was turned over to Harnett County authorities and, in August 2014, they announced they would not file criminal charges against the plant, which supplies Pilgrim's Corp., the second-largest chicken producer in the world. Szoka said activists like these would fall under the bill's language.

"This is a person who intentionally decides to do something outside of the scope of their job and record it to breach the duty of loyalty," Szoka said. "If you hire someone to do something for you, you have some expectation they will do the job they're hired to do. For people who go into a job particularly to record things and not to work, there's a narrow area that defines (violators)."

Szoka said he could not answer whether those who released the most recent Compassion Over Killing videos would be held liable under his bill. The group turned the footage directly over to local law enforcement agencies but also published the video on its website.

"That's a good question," Szoka said. "I guess that's why we have the most lawyers in the world living in the United States. It would have to be answered by them. (Publishing the videos on the web) would go against the spirit of what we're trying to do here, which is to go to law enforcement and let them handle the footage."

Erica Meier, executive director of Compassion Over Killing, said her organization works to inform local law enforcement of crimes happening within their jurisdiction, but is now being targeted and will be vulnerable under any new bill targeting activists.

"We are exposing realities happening behind closed doors," Meier said. "This footage gives consumers the information they need to make a more educated choice in the marketplace. It's horrifying and yet this is the type of footage that these companies and the government is trying to keep in the dark."

She praised the work of the activists who have worked for her organization's recent investigations.

"The undercover investigators willing to go inside and wear a camera are on a mission to expose the truth about farm abuse. They understand the importance of bringing this footage to the public's attention. These facilities won't let people inside, so these investigators have made it their mission to bring it to the public."