This story is the second of a five-part series on women making a difference at Charlotte arts and cultural institutions.

The rapid change of Charlotte neighborhoods and the bustling development projects around center city has made cranes in the sky and bulldozers on the ground a normal fixture in the Queen City. Moving trucks are becoming a fixture too. The influx of breweries, coffee shops, dog parks and apartment complexes into historic and artfully eclectic neighborhoods around Uptown are sending longtime residents packing. The unspoken "G" word — gentrification — finds itself floating around conversations about the ever-growing and ever-changing Charlotte.

Alysia Osborne, director of the Historic West End Initiative for Charlotte Center City Partners, has taken on the role of West Charlotte community builder for Uptown's non-profit organization that forges public and private partnerships to help promote the city's economic, cultural and residential development. She is the first point of contact at Center City Partners to see, hear, feel and address West Charlotte community members living in the Biddleville area, located less than a mile from Uptown. Osborne walks the tightrope between neighborhood revitalization and community-driven solutions that address the needs and desires of longtime West Charlotte residents.

"I always say this type of work ain't for suckers," Osborne says. "And I mean that. You can't be soft. You have to have thick skin."

Osborne's thick Mississippi accent brings a strong emphasis to the word suckers. Osborne leans in a bit to explain why suckers need not apply when it comes to community building and neighborhood revitalization work.

"At the end of every policy, every law, and every decision in our community, there are people," she continues. "This work impacts real people every day. So, if you lead with that thinking — that whatever I do, whatever I say, or however I move is going to impact someone else's life — then you are less likely to have a much larger negative impact on people's lives."

With the area of West Charlotte now becoming a place of interest for reinvestment and revitalization, many eyes are now fixed on how this part of the city will change. A major concern community members have expressed is the potential erasure of West Charlotte's rich history, the stripping away of its uniqueness and the displacement of longtime residents. 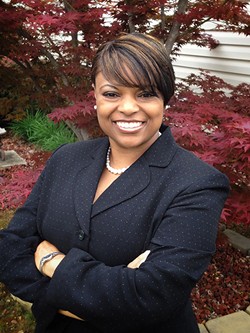 Osborne has been listening to and studying those concerns in Charlotte since September 2015, when she joined Center City Partners. But she has been studying the intersection of policy, law and community since her days as a political science and pre-law undergrad at Tougaloo College.

"I did not plan to become a planner," she says. "My plan was to become a criminal attorney, but I discovered that was not my passion."

She found her passion for urban planning at a random trade show booth at a job fair. "The Jackson State University Urban and Regional Planning Program had a booth," she remembers. "They talked about what urban planning was and how it impacted our communities. For me, I saw the intersection of policy, law and community. Those were things I was passionate about. That's how I ended up in the community-building profession."

The first steps for Osborne's people-first outlook that she brings to her Charlotte community-building work started with consolidating several different visions for Historic West End into one actionable plan that adhered to some of the recurring themes the community valued. "Although there were at least 13 different documents, there were some common themes about what this community really values and what they see their future as being," Osborne says. "So we took those documents and those values and some of the policies and said, 'Let's create a tactical plan that specifies 1) what we are trying to achieve, 2) who's going to take the lead on achieving those goals, and 3) what's the time frame of when this will happen and what resources are available."

The time frame is linked to the LYNX Gold Line Street Car development. That, combined with working alongside other community partners, adds a level of accountability for all parties involved in the redevelopment and reinvestment process. Osborne's group, the Historic West End Initiative, announced a three-part plan that spelled out "what we are going to do in the next three years and who is going to take the lead," she says. "Then the community is holding each other and us accountable for those things. Because we have been talking for a long time. It's time to actually do some things."

One of those things was the development of the temporary Five Points Plaza. Charlotte Center City Partners conducted a study that looked at under-utilized public spaces throughout Charlotte. The historic intersection of Five Points, where Beatties Ford Road, West Trade Street, Rozelles Ferry Road and West 5th Street converge, was deemed as one of the least walkable public spaces in the entire city.

Charlotte Center City Partners, along with the Knight Foundation, the Ghel Institute, the City of Charlotte and the Department of Transportation, conducted a preliminary study to figure out the current state of Five Points and how they could make it more walkable. A key finding from the study was to create a plaza.

According to Osborne, the goal of the Five Points Plaza would be to create a safe gathering space for the community. But construction of the Gold Line Streetcar extension put the Five Point Plaza project on hold.

"In the meantime, the need was still there to create a walkable space and gathering space for the community," Osborne says. "You have to engage the people that you are asking to experience this space and who, quite frankly, own the space because it is in their neighborhood. Whether it is legally their ownership or not, it is their open space. It is the place where they can experience the plaza day in and day out if they choose to. So, in my opinion, they should be the ones deciding what it should be."

One element of the space came from a partnership with the LATIBAH Collard Green Museum. "They now have an outdoor exhibit, with a sound stage and all this art that they created," Osborne says, beaming. "Painting the benches, a colorful wayfinding sign that has all the Historic West End neighborhoods on it. The space is so bright and colorful."

The temporary Five Points Plaza has hosted Savory Saturdays, the city's first breakfast food truck rally. There have been movie nights and an African Culture celebration with vendors, dancers and visual art demonstrations.

"When they have something in that space it creates a sense of place," Osborne says. "A sense of unity. A sense of 'I care. I live here. This is our space. Come enjoy it with me.' It's just such an inviting space."

The temporary Five Points Plaza is just one of many examples of how Osborne is using a community-first approach when it comes to West Charlotte community-focused redevelopment process. There are a lot of big ideas floating around, but the ones Osborne hears the most concern about remain those fears about losing the uniqueness of West Charlotte and worries of displacement.

"We are working on some specific strategies about how do we balance reinvestment, bringing in the new, while keeping what is important and unique about the area," she says. "And giving people who have been here throughout the years the opportunity to experience that new investment."

For example, Osborne says, "If you live in your house and you haven't had the opportunity to rehab your house, what are the barriers you are dealing with? Do you need rehab dollars? Do you just need some tools? Maybe we create a community tool bank."

Osborne's community building work requires a lot of minds and hands on deck, she says. "It has to be a multilayered approach with multiple partners working toward the same goal. Through each development cycle we get smarter. We as a community learn from our recent actions. We learn as we go. And I think that is pretty smart, because we cannot use a cookie-cutter approach to community building. That doesn't work. We see this within our own city and across the country. We see that it has to be a tailored approach."

She's also seen that it requires input from the communites being developed. "To get it right, it starts with the people that live in West Charlotte," Osborne says. "It is not a top down approach where you tell the people what's best for them. It's asking them what they want and then we decide together how to best make that work for everyone."