Driving down Grandin Road in Wesley Heights on a recent Saturday afternoon, it's easy to tell that Kevin Jones is still in awe of the historic neighborhood he moved into five years ago.

Jones is taking me on a tour of some Wesley Heights' more recent development, but first he slows down to appreciate the bungalows and craftsman-style houses on his street, many of which were built in the early- to mid-20th century.

"They are absolutely gorgeous. In terms of the historic nature, a lot of these are pretty legit and have stayed in really good condition. A lot of the windows are the original windows, all that kind of stuff," he says, gazing out from his aqua blue Hyundai Sonata.

As soon as he and his wife began renting in Wesley Heights in 2012, they knew they wanted to buy a home, which they did the next year.

"We wanted the feel of a traditional American neighborhood," he says. "Wesley Heights was appealing because it was in a historic district and our thought was, 'Hey, this will be protected. This is someplace where they can't just do any old thing.'"

But a recent rezoning petition for the land just beyond Jones' backyard has him concerned about what developers will be allowed to do in the historic district of Wesley Heights.

Charlotte urban development firm The Drakeford Company is aiming to rezone the land where two homes now sit on Walnut Avenue — changing it from residential to mixed-use — in order to place a six-unit condominium behind the homes that would come right up to Jones' fence.

If approved, the complex could legally be up to 45 feet high, which would dwarf the homes around it, and look directly down into Jones' yard. He says his reasons for standing against the rezoning proposal go beyond that.

"I view my invasion as a little bit more minor," he says. "Yeah, these people could look into my backyard and that kind of stinks, but the erosion of a historic district is a lot worse to me."

Although TDC reps have no plans to demolish the two historic homes already on the property, Jones and some of his neighbors worry about the precedent it would set to stick a towering development directly in the backyards of those homes.

Before driving around Wesley Heights, Jones takes me one mile east of the neighborhood, just across Frazier Park. He points out the newly constructed skeleton of a three-story development going up on Westbrook Drive, just behind an older, one-story home.

"As you drive down here, you see that house and you see that thing right next to it — it destroys the time in which a lot of these homes were made," Jones says. "This doesn't feel like a traditional American neighborhood. This is exactly what we're fighting against."

Jones isn't alone in his fight. As of Creative Loafing's press deadline, 143 people had signed a petition calling on the mayor and Charlotte City Council to reject the rezoning petition.

Those residents will have a chance to speak to city officials and representatives with The Drakeford Company at a community meeting at the Wallace Pruitt Recreation Center on November 30.

Pointing to other structures around the neighborhood, such as the existing Walnut Hill condominiums and Grandin Heights apartment complex, currently under construction, Jones says he welcomes these developments, which were built on vacant lots. "Charlotte's under a lot of pressure to infill, to create density rather than sprawl, and as a neighborhood we totally get it. You know what: I can't wait to welcome these guys once these condos are done," he says, motioning to Grandin Heights.

"A lot of the narrative has become that Wesley Heights is pushing back against infill development, which we aren't," Jones says. "We just look for the right opportunities, and putting condos in the backyards of our historic homes is just not the right opportunity."

Some, however, say that the hybrid placement of historic homes and mixed use could be just the right opportunity for preservation in a rapidly growing neighborhood. In a statement published on the Charlotte-Mecklenburg Historic Landmarks Commission website, the organization appears optimistic about the development.

"I believe the project could demonstrate how historic preservation and new construction can be compatible," the statement reads.

There have been discussions between The Drakeford Company and the HLC about selling the two historic homes on Walnut Avenue to the HLC, which would place preservation covenants in the deeds — protecting them from demolition or redevelopment — and sell them for profit. 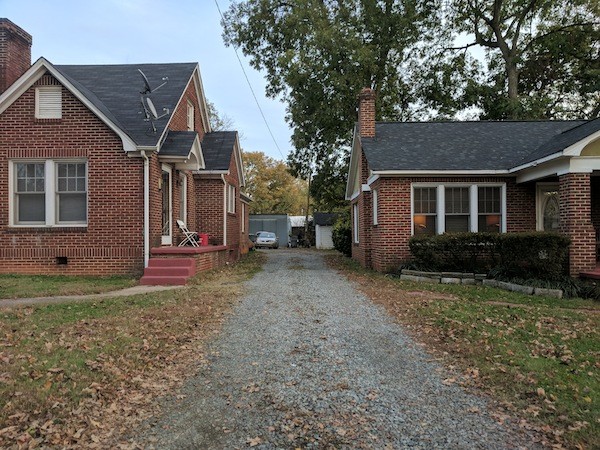 Dan Morrill, director at HLC, says the organization will not take an official stance on whether the rezoning request should be approved, but pointed out that selling the two homes to HLC could be the only realistic way to guarantee their preservation.

Although the homes are in the historic district of Wesley Heights, there's not much protection in place from the city's Historic District Commission that could save homes like the ones on Walnut Avenue from being torn down, whether or not the property was rezoned.

"Here's one thing that many people do not realize," Morrill explains. "Under law, if someone came and wanted to demolish the two houses in the front and use existing zoning to put up new, bigger houses, there would be no way that the demolition of the houses could be prevented, except that the HDC could delay the demolition up to one year."

Morrill points out that the city could acquire the property through eminent domain, but "politically that would be most unlikely," he says.

"This is the question the residents of Wesley Heights themselves need to seriously consider: How important is it to them to preserve the two houses on the street?" Morrill says. "Because here's the basic reality: Land values in Wesley Heights are escalating, and frequently, the purchase price that one has to make for a property is so high that the market looks for ways to get an adequate return to justify that purchase price. Frequently, what they look for is infill."

Bobby Drakeford, CEO of The Drakeford Company, points out that he served for eight years on the HLC, and says that historic preservation is important to him.

However, Drakeford claims his proposal to build apartment units behind the two homes is normal for the location, which is at the very outer rim of the historic district and borders business properties like Rhino Market & Deli and industrial supplier Lubromation.

"We're on the peripheral," Drakeford says. "We're right beside the commercial properties, where generally you find that there is a transition between commercial and single-family housing; often apartments. So this is a pretty typical land use pattern to find commercial, then high-density residential and lower-density residential. It wasn't a concept picked out of the sky." 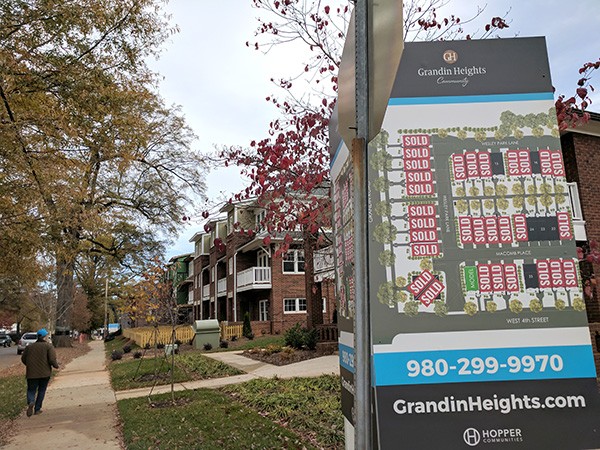 Shannon Hughes, president of the Wesley Heights Neighborhood Association, says he'd rather see the development go into the large, oft-unused parking lot in front of Rhino Market next door, which is outside of the historic district.

Hughes points out that the Walnut Avenue corridor is already 20 percent smaller than it was when the neighborhood was formed, so to keep building around the periphery would only continue a process of chipping away at the historic district.

"Where do you draw the line?" Hughes asks. "Because if the city keeps redrawing the line every 10 to 15 years, then why do you have a historic district? Does it really matter?"

Justin Harlow, elected in November to represent District 2 on Charlotte City Council, says he'll be at Thursday's meeting to discuss the issue with his new constituents. Although he'll technically be attending as a private citizen, he'll be sworn in on December 4, and will be in his seat by the time the proposal comes to a vote.

It looks to be his first test as a District 2 representative.

"My plan is to hear both sides out," Harlow says. "I don't want to be the type of council member who just gets the planning committee's opinion at the meeting. I want to hear these things up front."

Drakeford will also be in attendance at Thursday's meeting, and says he looks forward to working through some of the issues and concerns of residents.

"I do want to hear what people say," Drakeford says. "There are several stakeholders whose voices need to heard. We haven't heard them all, and we're going to listen."

It's safe to say there will be plenty to listen to.

[Editor's Note: An earlier version of this story referred to the homes in Wesley Heights as being built in the early- to mid-19th century. It was meant to say 20th.]