This story is the third installment of a five-part series on women making a difference in Charlotte arts and cultural institutions and businesses.

Strands of golden blonde hair whip against Varian Shrum's face on a windy August day in 2016 as she poses for an "us-ie" with three fellow Charlotte Emerging City Champions. The newly christened city placemakers — chosen by the Knight Foundation and 8 80 Cities for their innovative ideas about public spaces — have found the perfect picturesque Uptown photo op at Fahrenheit Restaurant atop the Hyatt Place Hotel. The Knight Foundation has sponsored this dinner get-together to help build camaraderie among past and present ECC fellows.

The photograph captures the rustic glint in Shrum's gaze. Her pastel green eyes have just a hint of brown around the bottom edges of her iris and pupil. It's as if they are undergoing an oxidation process — like the paint-chip-covered pipes at the CAMP North End development site where she works. Unlike most Charlotte development projects, CAMP North End wants to preserve the city's beautiful but old buildings and storied history of development. For the company heading up the project, ATCO Properties & Management, how people emotionally connect with a site location matters as much as the 21st century vibrancy that future tenants seek.

Shrum is CAMP North End's community manager. The 27-year-old's focus is to create a cooperative spirit in the 1.3 million-square-foot industrial facility that is more than 100 years old, sits on 75 acres just south of the Druid Hills neighborhood on Statesville Avenue, and is packed with Charlotte history. "I think historic buildings have a way of grounding us and giving us a sense of permanence and place," Shrum says. "When those old buildings go away, memories can go away with them."

The plan for the CAMP North End site is to help the city of Charlotte realize its vision of bringing what it calls the Applied Innovation Corridor from South End, through the heart of Uptown, to North End, and on up to the University area. It is part of the 2020 Vision Plan for Charlotte crafted by Charlotte Center City Partners in 2009. The idea, for sites like CAMP North End, is to help transform North End into a local economic hub.

Currently in development, the corridor is ripe with a 100-year history tied to icons of Charlotte's innovation. Development sites such as CAMP North End are rare architectural finds in the Queen City.

Shrum describes her first impressions of the site: "It blew my mind because, one, there is a site this big and this close to Uptown that I had never heard of; two, all of these old buildings were there in near-mint condition; and three, there is this insane history about Charlotte attached to these buildings that many Charlotteans never knew."

The reason Charlotteans never knew about it is because the location has been private for nearly a century. The history of the site starts with the acronym CAMP, which stands for Charlotte Army Missile Plant. The U.S. Army once owned the site, and so have automotive innovator Henry Ford and more recently Rite Aid.

"It started out as a Model T Ford Factory complete with a water tower and boiler room that powered the entire operation," Shrum says. "Then in 1924 the Army bought the site and built out all the other warehouses. Those warehouses were used as a quartermaster depot during World War II. Toothpicks, mattresses, uniforms, boots, non-perishable food items, repatriated soldiers and more were all distributed from that space.

"During the Cold War, missile casings were made in the space," Shrum continues. "And in 1975, Rite Aid bought the site. They were there from 1975 until May 2016." She smiles widely as she quickly reels off those names again in a staccato fashion: "Model T's. Missiles. Rite Aid. Applied innovation."

Shrum's Career path is as seemingly arbitrary as the list of various owners of the CAMP North End site. Born and raised in the Washington, D.C., area, she attended Wake Forest University, where she studied communications and took a course that explored the relationship between public spaces and public health. It was her first taste of the importance of urban design. After graduating, Shrum worked for a while as a nanny, then a social media manager, and finally, a community real estate developer.

"When I came to Charlotte five years ago, I had a lot of free time on my hands because I did not have a job yet," Shrum says. "So, as I was searching I just decided to take an online class to kill some time. I thought, OK, what is something that I always found really interesting but never got around to studying?"

She found her answer in a class called "Designing Cities." It forced Shrum to get out and explore Charlotte with new eyes, a new vocabulary and a new understanding of how cities are laid out. "Essentially, a city's design can facilitate or not facilitate human interaction, and human interaction is what life is all about," she says. "It is what determines so much of your happiness and life satisfaction. Knowing that a city's layout can affect that just really struck me."

The combination of her studies and a chance connection with real estate executive Tracy Dodson while working as a nanny, tapped Shrum into the world of Charlotte economic development. Dodson helped her land an internship at Charlotte Center City Partners.

The Rail Trail wasn't Shrum's only project at the time. "Around that time I was feeling inspired and discovered this grant program called Emerging City Champions. They were looking for innovative ideas from young people who had ideas about increasing civic engagement in their community, or increasing access to public space, or increasing mobility, access to walking and biking infrastructure. I just decided I would try an idea that ultimately was funded."

Her idea was the CLT Neighborhood Living Room.

"Basically, I worked with my neighbors to turn a parking lot in front of an art gallery into a living room for the neighborhood," Shrum says. "So that meant, yes, we had couches, but we also had yoga class, pop-up coffee, some shopping, live music, kids' story time. I just tried to think about: What do you do in your living room? And then, what would that look like scaled up to a community level? It was so cool and so many people came and just really got it and embraced it."

It was Shrum's passion for creating a sense of community in neighborhoods — not to mention her direct experience — that got the attention of ATCO Properties & Management, and the company brought her into its development team. Her love for the historic tales and rustic character of buildings brings a smile to her face whenever she talks about the plans for CAMP North End. Its historic ties to innovation will continue with its rebirth as part of the city's Applied Innovation Corridor. 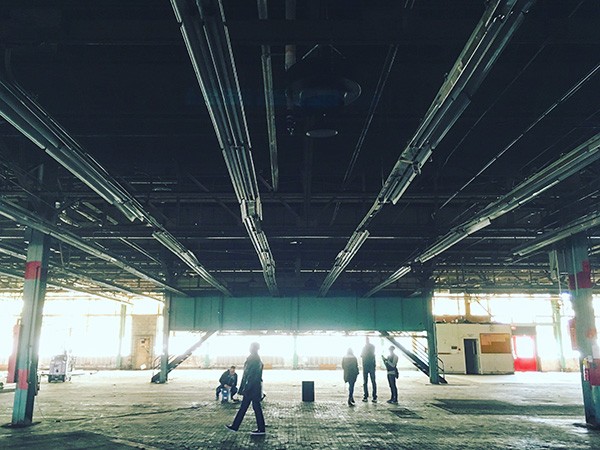 Shrum asks a rhetorical question: "What will be done differently with our project?" Then she answers it: "First of all, we will not be tearing down buildings. We have every intention of reusing them for commercial purposes, creative workspaces, and gathering spaces for the arts and food community of Charlotte."

The goal is for the area to remain a bit dusty in order to preserve its raw-space nostalgia. "We want to keep it kind of dirty and banged up, in a way, while still giving future tenants the freedom to make the space their own within that context," Shrum says. But the look of the CAMP North End space would mean nothing without a vibrant community, she adds. And that's why ATCO brought Shrum in as its community manager.

"It going to take a while to really activate the whole 75-acre site and all 1.3 million square feet of warehouse. So we are starting small. This summer and fall my job is to do some temporary activation of the Boiler Yard, at the foot of the water tower, with the common area and public space. The Ford Building has these little garage areas that we are turning into studio spaces for modern offices, freelancer workspaces, maker spaces, and art spaces," Shrum says. "We will have some food, some seating, a fire pit, some live entertainment.

"However, the idea is not to make it explicitly event-driven," she insists. "I want it to be a comfortable place to just go hang out at and feel good while being there, whether or not something officially is going on. We want people to just come hang out."

For Shrum, the most exciting part about her job as community manager is the chance to create a common area for the surrounding eight neighborhoods. She goes into detail about her mission at CAMP North End. "My mission is to make it a really diverse ecosystem of people in Charlotte who represent a wide spectrum of folks who are doing great work," she says. "This will be a place where new skills are learned and new ideas are incubated. It will be a place where people make things, and in the 21st century that involves a keyboard just as much as it involves a hammer."

It will take both, along with Shrum's contagious passion, to get it up and going.