Ant-Man and the Wasp: Middling Buzz | Reviews | Creative Loafing Charlotte
Switch to the mobile version of this page.

Ant-Man and the Wasp: Middling Buzz

ANT-MAN AND THE WASP
**1/2 (out of four)
DIRECTED BY Peyton Reed
STARS Paul Rudd, Evangeline Lilly 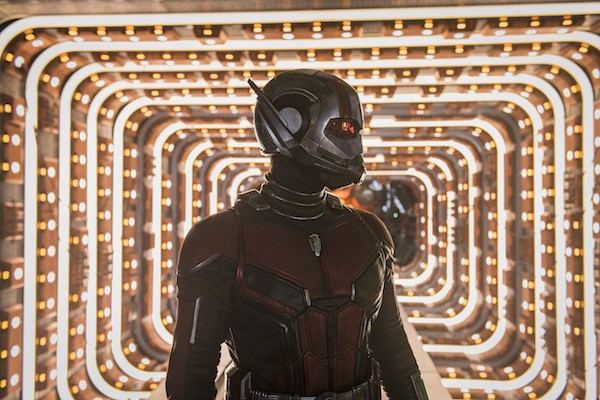 With Ant-Man and the Wasp, the Marvel-Disney moneymaking machine doesn’t quite pull off the cinematic hat trick of 2018, instead coming up a few stitches short. Not only does the 20th entry to date in the Marvel Cinematic Universe fail to match the heights of its 2018 stablemates, Black Panther and Avengers: Infinity War, it also fails to provide as much pure entertainment as its direct antecedent, 2015’s Ant-Man.

Arriving less than three months after the cumbersome Avengers: Age of Ultron, Ant-Man charmed moviegoers with its deftness, its humor, and a lovable lead performance from Paul Rudd as Scott Lang, the affable ex-con who becomes the diminutive superhero Ant-Man under the tutelage of scientist Hank Pym (Michael Douglas) and his daughter Hope Van Dyne (Evangeline Lilly).

Realizing that Ant-Man served as a brief respite from the more serious MCU offerings, returning director Peyton Reed and his five writers (a new crew save for Rudd, who also co-scripted the first film) have decided to double down on the ingredients they felt worked the last time around. Michael Peña (as Lang’s friend) said something endearingly dumb every 10 minutes? This time, make it every five minutes. Serve up 15 awkward exchanges between characters over the course of the movie? Better make it 30 awkward exchanges this time. Sparingly offer oversized ants as comic relief? Best to completely smother the new film with such interludes. Initially amusing, this tendency toward overkill eventually becomes wearying.

The central plot also doesn’t help matters. Since Scott successfully returned from the Quantum Realm in the previous picture, it doesn’t take a rocket scientist — or a scientist of Dr. Pym’s caliber — to figure out that the heroes will now attempt to retrieve Hank’s wife, Janet Van Dyne (Michelle Pfeiffer), from what has served as her microverse prison for the past 30 years. It’s a rather arid storyline full of tedious technobabble, and it’s only enlivened by the side-dish story strand of another superbeing, Ava Starr aka Ghost (Hannah John-Kamen), attempting to swipe Pym’s equipment to save her own life. Ghost makes for an interesting adversary – the same can’t be said for Sonny Burch (Walton Goggins), a black marketer who pops up at regular interludes to annoy both the heroes and the audience. 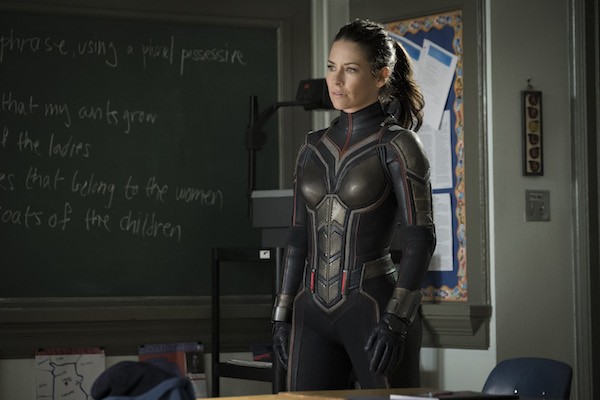 With its convoluted screenplay as well as FX sequences of numbing repetition, it would be easy to completely write off Ant-Man and the Wasp. Yet what largely redeems it are the central characters and the performers who fill out those roles. Rudd is as effortlessly charismatic as before — he transforms Scott Lang into one of the most sympathetic characters in the entire MCU — and his scenes opposite Abby Ryder Fortson, returning as his young daughter Cassie, are particularly pleasing. The role of Ava Starr is similar to that of Daniel Brühl’s Zemo in Captain America: Civil War — an ostensible villain with unexpected depths — and John-Kamen makes sure we grasp the method to her character’s madness. As for Lilly, she was already a dynamic presence in Ant-Man, but she’s allowed to further spread her wings (in more ways than one) as she dons her own costume as the high-flying Wasp. She’s as much the heart of this series as Rudd.

As for the Stan Lee cameo? It’s one of the funniest yet. And while it’s not hard to predict the focus of the end-credits sequence (after all, Thanos is out there somewhere), the particulars make it one of the most chilling of all MCU codas. It’s a signal that the brief playtime is over, folks, and Marvel will get back to the heavy lifting in 2019.