Charlotte punk band makes no apologies for its uncouth sludge 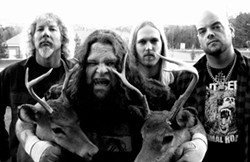 On Saturday, Oct. 5, Antiseen celebrates its 30th anniversary with a blowout at Tremont Music Hall. It's a milestone that makes the Charlotte punk crew one of the city's longest-tenured bands, but the group hasn't always seemed interested in the music going on around it.

Antiseen's collaborators — most notably the provocative and (quite literally) shit-slinging performance artist GG Allin — have come mostly from other places, and the band has found much of its fame in areas outside the Carolinas. Just look at the name, an intentional bastardization of the term "anti-scene."

Antiseen's shows are sprees of burly fuzz and hard-driving riffs finished off with wrestling theatrics and very real barbed wire; singer Jeff Clayton almost always leaves the stage bedraggled and bloody. The band's aesthetic is an onslaught of offensive words and imagery. Confederate flags are frequent. Apologies are nonexistent. Antiseen lives and plays by no other standard but its own, with no intention of changing course now.

"People love Antiseen for what Antiseen does, and if they want to hear me do something different, I'll do it in a different context," Clayton offers. He founded the group in Charlotte with guitarist Joe Young, the only other original member remaining among the quartet. Bassists and drummers have come and gone, but the band has never diluted its consistent blend of Southern-fried grime. They're stubborn, Clayton proudly claims.

"Antiseen does what Antiseen does best," he continues. "That's make a loud racket and put on a memorable show."

This self-reliant philosophy has often kept the band somewhat separate from the city's music culture. Clayton says that they have "one foot in the Charlotte scene" and "one foot out in the rest of the world." He's right. The band is more popular in parts of Texas and in cities like Philadelphia, which played host to its 15th anniversary festivities, and it claims dedicated fans across Europe — especially in Germany. Obsessives in Australia have tattooed Jeff Clayton's dark-maned visage on their bodies. Hank Williams III has a similar piece of body art.

"Antiseen has always had a deeply disturbed following," jokes local rock critic Michael Plumides. His 2009 book, Kill the Music, chronicles his experience with hard rock in the South, including a stint operating the controversial 4808 Club in Charlotte. That venue was one of Antiseen's favorite local haunts during its early days. Clayton got married there in 1990. His bandmates played the wedding march.

"They've managed to carve themselves a niche in the annals of Charlotte rock 'n' roll," Plumides says. "Jeff and Joe, they're kind of the Gene Simmons and Paul Stanley of raunch rock. One thing that Antiseen has always represented to me is the ugly underbelly of rock 'n' roll — exploitative Ramones-, Motörhead- and Mudhoney-styled, super-fueled, fuzz-metal punk. I don't know what kind of lasting effect they had as an influence. They were their own ship sailing the black waters of underground music."

For local rockers, Antiseen's convictions might be more important than its music. Through the early-'90s grunge bubble and the late-'90s wave of hip-hop-infused nu metal, Antiseen stuck to its guns, maintaining its rebellious vibe and never catering to mainstream tastes.

"We're very uncompromising," Clayton says. "We decide how we want to do things, and that's the way we want to do it. You can take that example in anything you do, whether you're an artist or a mechanic, or whether you have your own band. You don't even have to be punk rock. You could be a bluegrass band or you could be one of these new R&B-revisionist groups. I think we're a pretty good example of sticking to your guns and not being swayed or compromised."

That's not to say that Antiseen hasn't evolved. The brutish lo-fi muscle of 1991's Southern Hospitality was tidied on 1992's smoother, career-defining Eat More Possum. 2003's Here to Ruin Your Groove saw the group's Southern inspirations become more prominent as its roughness was matched by kinetic organ fills, fleeting acoustic charms and moments of Allman-esque boogie. The insistence on doing things its own way has become a frequent beacon to the bands that have followed.

"There is something weird about bands that are different that come out of Charlotte," says Josh Robbins. He plays bass in the punk trio Late Bloomer and runs Self Aware Records, a scrappy Charlotte imprint thoroughly invested in local music. He's not a huge fan of Antiseen, having scheduled Late Bloomer to play at a different venue on the night of the celebration, but he does respect the group's tenacity.

"They do it on their own, and I think that's where some of the longevity comes from," Robbins adds. "If you don't feel like there's necessarily anything to lose, or if you can do it yourself because you've had to do it yourself, then you just continue to do it yourself."

Today, the local scene boasts more than a few bands playing combative styles with a Southern flavor. The Dirty South Revolutionaries offer backwoods thrash with a serrated twang. Andy the Doorbum bellows foreboding rural histories over broken-down folk not far removed from Antiseen's softest moments. But while there are subtle similarities between Clayton's crew and some of Charlotte's more intriguing up-and-comers, their most lasting gift might be a simple reminder that rock 'n' roll can still be sustainable, even if you're unwilling to compromise.

"There just aren't that many bands that have stuck to it as long. I think that really means a lot, especially to the younger bands," reasons Lisa Barr. She has booked bands at Tremont, Antiseen's most consistent Charlotte home, for about four years. "They see that these guys are a lot older than them, but they put on just as high-energy, if not more of a high-energy show than a lot of the young bands. There's no other band that I can think of in Charlotte that does that kind of hard music and still does it this many years later."