If Patois Counselors' debut long-player isn't the perfect rockin' record, it comes damn close — that is, if your tastes for rockin' records runs to smart, dark, witty, compact tracks that distill all the restless energy of rock, pre- and post-punk, into 11 nuggets of intense, noisy melodicism that clock in at 3 minutes, 20 seconds or less.

On the surface, Proper Release's two-minute opener "Disconnection Notice" is a tirade about those pains in the asses we receive in the mail each month from Duke Energy. "The bills are unpaid," front man Bo White barks, in a sneer worthy of the Fall's Mark E. Smith, over drums, gurgling bass and a sweet, slicing guitar line. "You wouldn't wanna disconnect now."

But as the album unfolds, "Disconnection Notice" reveals itself to be part of a larger punk-rock meditation on what lies beneath the surface of the banalities of day-to-day life in the 21st century. In the rush of guitars and percussion that fuel "Repeat Offender," White shouts the title over stuttering, staccato guitar rock as if he were the front man of an '80s oi! band — or Fugazi.

"I wanted to make a cohesive piece about modern living as I see it — full of contradictions and mundane tasks," White tells me. "I wanted to point toward the important things that can get brushed under the rug when one is caught in the minutiae."

"Repeat Offender" crashes into the more subdued, vaguely African-inspired rhythms of "Making Appts," over which White sings, "So tired of making appointments — stop breaking them." But those rhythms get their energy from jittery electronics, a prancing bass line and sustained bursts of punk guitar noise. And then, about three-quarters of the way into the album, there's the spooky intro to an instrumental, "Pffones" — one of two tracks featuring only White on all instruments — which gives way to dental-drill sounds, crashing percussion, crawling bass, the tinkling of strings and quiet/loud moments of bleak ambient sounds.

Proper Release (Ever/Never Records) closes out with the full-on post-punk rush of "Target Not A Comrade," which draws on the best elements of a genre that's brought us from the idiosyncratic experimentalism of Pere Ubu through Pavement and on up to Parquet Courts. It's a massive sweep of 100-percent top-notch music that White describes in three sentences that are as compact as his songs: "Big ideas. Casual application. Having fun."

White has been working up to Patois Counselors' first proper release over his entire career as one of Charlotte's smartest and most talented musicians and songwriters, early on with his local indie label Kinnikinnik Records and celebrated avant-rock trio Calabi Yau, and later as part of Yardwork, Black Congo, NC, Bo White y Su Orquesta and many other acts that today also include his band TKO Faith Healer and duo High Cube, with Mineral Girls' Brett Green.

White recorded Patois Counselors' earlier self-titled debut 7-inch by himself, and then put together a band to do gigs, cherry-picking from Charlotte's rich well of musicians. He enlisted what's become a rotating cast of players that, on the album, include ex-HRVRD guitarist Lee Herrera on bass; Garrett Leister, Kevin Clarke and Lofidels' mastermind Lenny Muckle on guitars; Robin Doermann, Joshua Cotterino and Krizia Torres on synthesizers; and David Ulloa on drums. 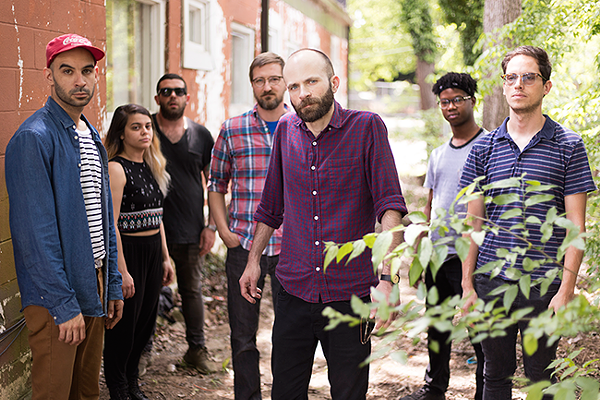 For Proper Release, White says he initially wanted to include all of the members of the earliest version of the live band, but time precluded everyone from participating. "It was recorded in two main sections, spaced apart by about six months," he says. "In that time, some band members pursued other interests and new ones stepped in."

One of those new ones was Muckle, whose own work as Lofidels is equally as adventurous as White's music. White brought the musicians together in his living room to lay down the recordings live. "I like the push-and-pull that comes from live tracking," he says. "We used smaller iterations of the group — bass, guitar, drums — then did overdubs for the rest."

The goal was to create music that feels live, but also includes all the benefits of an intimate bedroom set-up. "I wanted to lean away from the grandiose, to step away from the bandstand while still conducting the band," White says. "I attempt that with many of my musical projects, because I enjoy exploring that tension through music."

With Proper Release, White has come up with his finest attempt yet at exploring that tension within the context of a glorious post-punk sound. Patois Counselors are, no doubt, one of Charlotte's shiniest musical gems.