"Think of Wikipedia, which started 16 years ago," Manoj Kesavan says. "If someone told you then that hundreds of thousands of people were going to spend millions of hours sharing knowledge, and in the process create the largest ever free encyclopedia, it would have seemed crazy." 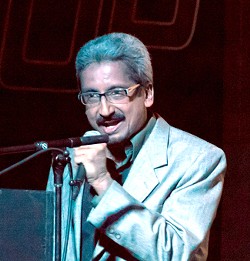 Kesavan, the director of the experimental grassroots arts festival BOOM Charlotte, knows a thing or two about crazy ideas — and how to turn those ideas into innovative reality.

The festival will return to Plaza Midwood in 2018 for its third go-round.

BOOM is similar to Wikipedia, Kesavan explains, because it's an open-platform arts organization. To an extent, it's also crowd-sourced, drawing its staff from volunteers, and eschewing a top-down approach. Local artists comprise the festival's curatorial groups, which choose acts for the festival, and the festival draws artists and performers from every corner of the arts community.

"I believe that 21st century art organizations will look more and more like BOOM," Kesavan predicts.

Yet, even as BOOM's director advocates a new way of packaging and promoting the arts, Kesavan also plans, in 2018, to repeat many of the aspects that made the festival a success last year.

Launched in 2016, BOOM started big, featuring 50-plus shows in four venues over three days. In 2017, the event exploded, with 80 shows in six venues — Petra's, Snug Harbor, Rabbit Hole, an outdoor stage called the Intersection, the now-shuttered Twenty-Two Gallery and International House. "We could easily have had 100 shows," says Kesavan, who estimates last year's BOOM attendance at 10,000 people. The diversity of the festival also expanded in 2017, Kesaven adds.

"I believe that more than 50-percent of the performers last year were minority artists," he says, pointing to 2017 newcomers AfroPop!, Hip Hop Orchestrated and Urban Züe. More and more, Kesavan says, the make-up of BOOM was reflecting the diverse community it serves.

For 2018, BOOM will consolidate on last year's growth. The core of the festival will remain its fringe shows — a series of hour-long ticketed performances at Petra's, Snug Harbor and Rabbit Hole. Kesaven is also looking at a couple of extra venues, but they have not confirmed yet.

"Some of the companies that have been part of BOOM in the past submitted again, as well as some new ones. Our name is slowly spreading," Kesavan says, pointing to applications from performers based in New York and Atlanta. "People are really responding to the call."

The Intersection, the big outdoor venue featuring dancers, acrobats, music and more, will also be back. Submissions for the Intersection will remain open as late as March.

"There are new organizations who are doing great work that want to be a part of BOOM," Kesaven says, admitting that the festival now finds itself in an enviable quandary: how to make room for all the high-quality work?

"We have more submissions than we have slots," he says. "The field is very promising."