Changing of the guard

One of the more exciting moments for me, as a Charlottean in 2017, came on the night of November 7, when Creative Loafing news editor Ryan Pitkin reported live via Twitter from VBGB that Braxton Winston and several other young candidates had been elected to the Charlotte City Council along with new mayor Vi Lyles, the first black woman ever to hold that position. 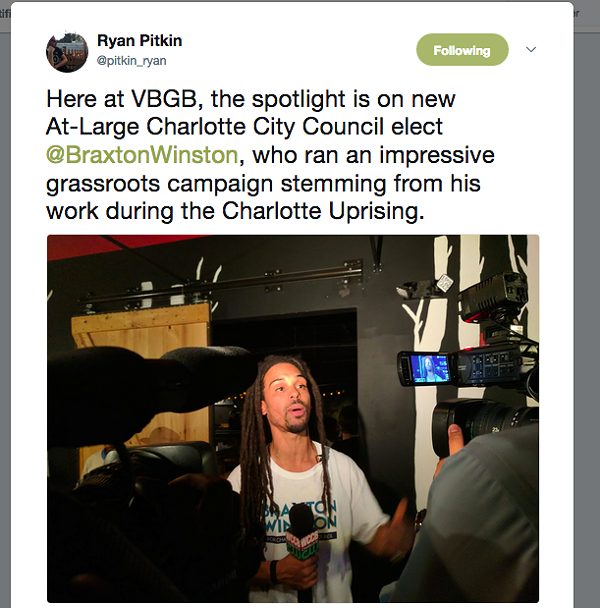 CNN would later weigh in with a national online story that referenced the iconic photograph of Winston from the 2016 uprising that followed the police shooting of Keith Lamont Scott.

"Last September, Winston was the center of a dramatic photo from Charlotte, North Carolina, showing him shirtless and with his fist raised, facing a line of police wearing riot gear and holding batons. Soon, though, he'll be joining the Charlotte City Council," CNN reported. "And the path that led him to the council began specifically on September 20, 2016, the night that photo was taken."

"My life changed [that day]," Winston told CNN. "That day, the history of Charlotte changed."

Charlotte's history continued to change throughout 2017, and Creative Loafing has documented those changes not only in the city's leadership, but also in its arts, music, theater, film and food.

A year ago this past month I returned to Charlotte after a few years away on the West Coast. During the previous year, I'd followed all the drama going on here — the HB2 fiasco, the demolition of the iconic Charlotte Observer building, the Keith Scott killing and the subsequent uprising that thrust Winston into the national spotlight. It was all so symbolic. A major paradigm shift was happening in Charlotte, and I wanted to be part of it.

That memorable image of Winston was powerful, but it was the images of the hundreds of other young Charlotteans making their voices heard, marching in the streets and getting involved in local politics that really rocked my world. And those young people continued raising their voices, creating great art, music and online citizen journalism that directly addressed the issues that had led to that dramatic October 2016 breaking point. Those activities are not uncommon in other major cities I've lived in, but they weren't things I associated with Charlotte. Living here in earlier years, I had not seen such a high level of passion from so many young and creative people. In earlier years, Charlotte had been much more… polite.

When I came back as editor of Creative Loafing, I called a staff meeting where, together, we decided to do a little experiment: From January 2017 forward, CL would cover only news and arts coming out of Charlotte. There would be no big stories on national issues or national artists, musicians and other figures. There was enough news coming out of Charlotte to fill our editorial spaces several times over.

One year later, I am happy to report that our experiment has not only been successful, but it's been deeply satisfying, as 2017 was a watershed year in our city. All of the stored-up energy, emotion and feelings that had driven the activism around HB2 and the Keith Scott uprising were funneled into even more art and civic engagement that will have a long-lasting impact on this city. The people of Charlotte began telling their own stories in a variety of different media — and telling their stories well.

Singer-songwriter LeAnna Eden's "Protest Song" and Marcus Kiser and Jason Woodberry's multimedia visual art project Intergalactic Soul both had been born out of the ongoing police violence against black people across the country that had preceded the Keith Scott shooting, and both took on added poignancy in the wake of the 2016 uprising.

And then there were the young social justice activists — Ash Williams, Bree Newsome, Winston and so many others. Like superheroes, they swooped down and took control at demonstrations, public forums, city council meetings and radio talk shows. Other young Charlotteans rallied in support of those activists, and when election time came around in November 2017, it was young people who helped several of them, including Winston, gain positions of power in the city.

Artists — particularly artists of color — have made civic engagement a big part of their works, blending social issues such as housing, hunger, education, race, gender and voting rights into stunning works of visual art, theater, music and even food. In November, photographer Jonathan Cooper partnered with local artists and a chef to create Feast Your Eyes, which brought artists and foodies together in a novel setting.

"We're taking a seat at the table, interacting with each other and conversing about how Charlotte is progressing or not, and having that conversation over the art of food," painter Georgie Nakima told CL writer Emiene Wright in November. "I'm so excited."

We're excited, too, and in this first issue of the year, we offer a few peeks at what you can look forward to in 2018.