The smoky confluence of barbecue and nostalgia 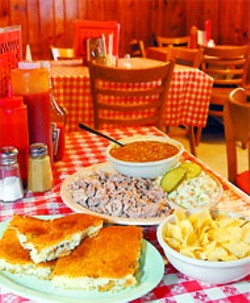 I lived most of the first 10 years of my life in Charlotte. My father, a power company subcontractor, traveled constantly and we didn't have much of a relationship. I never felt he approved of me and although blood somehow fates even the most unlike kinfolk to love one another, we were and have remained strangers to one another.

But every summer when I was a kid, my father took me on the road with him for a week. We drove back roads where he checked on crews. I was always impressed that my father could relate to these men, most of whom looked like moonshiners on parole and whose grins left me with a lifelong fear of losing most of my teeth.

It was on these trips that I had my first exposure to rural barbecue shacks. Nearly every day, we stopped at one of the ramshackle roadside buildings. Beside many was a pit literally dug in the ground where men — always men — roasted pork over a slow, open wood fire. Just as often, a whole pig was smoked inside a rigged oil barrel. In either case, the men stood by basting the meat.

That's something you can say about nearly all barbecue: Southern women may own the kitchen, but men own the barbecue fires. (Indeed, Why Do Men Barbecue? is the title of a book that examines cultural roles.) So, don't kid yourself. One reason for the South's obsession with barbecue is male sentimentality. I feel it creep into my brain whenever I eat barbecue. Taste becomes secondary to nostalgia for an uncharacteristic expression of male nurturing.

Besides the aura of male bonding and nurturing, barbecue bears memories because its cooking is inherently personal and bound to region. I quickly learned on these trips that barbecue sauces vary broadly in the Carolinas. My uncle in the Outer Banks, like most in eastern North Carolina, anointed his smoked pork with a sauce of seasoned vinegar. In the western part of the state, the vinegar sauce was made with some tomatoes, just enough to turn it pink. In South Carolina, my mother's home state, we ate barbecue sauce with a tangy mustard base. And each cook added his own twist to the regional style. So, that's another thing about barbecue: It defies the other monolithic stereotypes of Southern character and cuisine.

It is bittersweet for me to remember those lunches with my father. Afterward, I was lulled to sleep in his station wagon, my head against him, feeling completely content. I never eat the stuff without remembering that feeling and a vague annoyance that the feeling wasn't more frequent.

It was lunchtime on a Friday many years later, in the 70s, at the Elberton Star newspaper in Elberton, GA. Wearing a denim apron, I labored over the Ludlow machine, casting the front-page headlines in lead. Bob Williford, the paper's portly publisher, strolled my way in his immaculate white shirt. "Hey, Cliff, do you like barbecue?" he boomed in his basso profundo.

Soon we were at something like a trailer just outside city limits. I do not remember its name or the taste of the barbecue. What I do recall is a baffling racist spectacle. The interior walls were covered with George Wallace memorabilia — autographed pictures, bumper stickers, personal letters, news clippings — along with racist kitsch. The decor of pure hate shocked me.

But my greater shock occurred outside as we left. There, a long line of black people had formed. Not allowed inside, they were buying barbecue from a takeout window.

"How can they do that?" I later sputtered to the black man who worked at the Star.

"I guess they like the barbecue," he said, laconically.

About eight years later, I got an even greater shock. I was giving Larry Ashmead, then-executive editor of HarperCollins, a tour of my five years of working for rural weekly newspapers. I particularly wanted him to see the barbecue shack in Elberton.

Nothing seemed different as we drove up to the building, until we opened the door. First, I noticed the walls had been stripped of their racist bric-a-brac. Someone shouted a greeting to us and, turning toward the counter, my eyes met a black man's.

"Holy shit," I muttered, clearing my throat. "Are you the owner?"

He had, in fact, bought it from the racist owner a few years earlier. I expressed my mystification. "Well," he said, "I always liked the barbecue here."

That barbecue shack gave me a firsthand lesson in something that Flannery O'Connor observed repeatedly: The diabolical sometimes becomes the instrument of grace. What is hateful contains the seeds of its own reversal. In the South, we spend a lot of time lingering. Maybe we're waiting for good to show its face in unlikely places. That's how it is with barbecue and my father. It's a sweet memory in our long, conflicted life — a picture that redeems inescapable love.

The oldest continually operating barbecue joint in Atlanta (where I now reside) is Harold's, which has been open more than 50 years near the federal penitentiary. I can't say I'm very fond of the food here. The ribs are bland and the chopped 'cue lacks the deep smokiness I crave. The Brunswick stew is a mite sweet. I do love the corn bread, made with cracklings, like my mother's.

But forget the food. The paneled walls and clientele of grizzled men and drawling women on a Saturday evening evoke usual memories. At the table next to ours, a middle-aged man and his elderly father are dining together. I feel sad watching them. As usual, the nostalgia annoys me as much as it draws me. My partner is grinning uncontrollably, pleased that he has ordered the all-you-can-eat plate. All I can do is take a deep breath and launch a long rambling story from the past.