Flavorful eatery is a perfect fit for NoDa 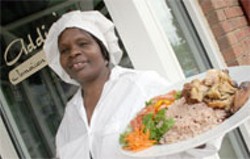 Many New Yorkers tend to be disapproving of new environments, but not Icia Roman. She chose to come to Charlotte: "I like the people here."

A native of Kingston, Jamaica, Roman left Brooklyn, NY, her home of 34 years, and opened Addie's Jamaican Cuisine on North Davidson Street in NoDa earlier this year. Addie is Roman's nickname. This is not her first restaurant venture. She has also owned and cooked in a Jamaican restaurant in Brooklyn for decades. Now she's strumming those same well-loved family recipes notes here.

Jamaican cuisine is riding a wave of popularity primarily due to its health connection. Jamaican dishes use a smaller percentage of meat and a higher percentage of rice, beans, vegetables and fish seasoned with a homeopathic blend of ginger, allspice, garlic and chilies. Jamaican food is an intermingling of New World, European, African and Asian émigrés. Barbecue is from the indigenous Arawak people; the Spanish contributed livestock; ackee, the Jamaican national fruit, was introduced by Africans; the British brought meat and vegetable patties; and Chinese and Indian emigrants added stir fries and curries, respectively. Jamaican cuisine is known for its marinated, slow-cooked dishes and stews.

Addie's restaurant is a perfect fit for NoDa. The interior of this 1,700-square-foot storefront space has Caribbean sun-baked green walls, dark woods, a scored concrete floor and a small bar in front of the open kitchen. A glass case contains such Jamaican specialties as large ginger cookies — a mellow gingerbread laden with ginger and spices — while the ubiquitous heating unit for Jamaican beef, chicken and vegetable patties (not made in house) sits nearby. Tabletops boast white butcher paper and fresh flowers. Palm trees bend gentle to the breeze from the overhead fans while a comfortable sofa and wine rack fill a side wall. Jazz hummed through the sound system as we inspected the streamlined menu.

The lunch and dinner menu is served all day. The price difference for the larger dinner portion is two bucks. Dinner entrees range from $8.50 to $16 for curried shrimp; most entrees (heaping portions) are around $10 and include two sides.

You can't go wrong ordering at Addie's. In comfort food such as this, there is a simplicity that ironically takes hours to achieve. Goat, chicken and ox tail are rendered into bite-sized portions and are served, bones and all. Addie's stew chicken is a tender-to-the-bone Caribbean version of Southern smothered chicken, yet the gravy is redolent with spices. This sauce is a "must dunk" for Addie's outstanding coco bread, the Jamaican style yeast bread. In fact, order enough coco bread to sop up all the sauces from all her dishes.

The fragrant curry goat, a Jamaican specialty served at festive occasions, proved a brawnier dish and a delicious contrast of flavors. On the mellow side was the ox tail stew in its darker, richer, velvety sauce. The only complaint against Addie's jerk chicken, hot-bathed in a luxuriantly zesty sauce, was the fight that ensued at the table over the last morsel. If you eat and share, you won't be able to hoard this dish.

Entrees include two sides. Rice is rarely bewitched into something special, but island coconut adds the dazzling and cooling touch. Even more enticing were the caramelized plantain slices. The blah-sounding steamed vegetables and vegetable rice seemed too healthy to be good, but they were, although not as tasty as the other sides. The mac and cheese was another winner.

Drinks take up one side of the menu. In addition to Red Stripe and other beers (which are a perfect match for spicy Jamaican food) is a brief but eclectic wine list. Also good are the unique blends of juices by Grace Tropical Rhythms, served in Snapplesque bottles, such as the sorrel ginger, guava carrot, pineapple ginger and mango carrot. Also offered are coconut water, Ting Jamaican grapefruit soda and, my favorite, ginger beer, which is similar to American-styled ginger ale but with a mega-hit of ginger.

Addie's service crew is friendly, knowledgeable and exhibiting more speed than what one is used to in places operating on island time.

I've often wondered why more homespun restaurateurs haven't sought out NoDa, which seems to have the antithesis of the cookie-cutter establishments that are invading other Charlotte neighborhoods. So hats off to Roman. We left contented by her island food. With temperatures soaring in Charlotte and the humidity index creeping further, eating well-crafted non-fussy Jamaican food seems a no-brainer.

Have a restaurant tip, compliment, complaint? Do you know of a restaurant that has opened, closed, or should be reviewed? Does your restaurant or shop have news, menu changes, new additions to staff or building, upcoming cuisine or wine events? Note: We need events at least 12 days in advance. Fax information to Eaters' Digest: 704-944-3605, or leave voice mail: 704-522-8334, ext. 136. To contact Tricia via e-mail: tricia.childress@creativeloafing.com.