"We Live In This Movie" | Features | Creative Loafing Charlotte
Switch to the mobile version of this page.

"We Live In This Movie"

Documentary centers on soldiers in Iraq 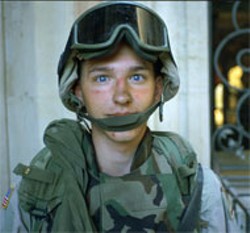 I went to a matinee showing of Gunner Palace a few weeks ago. The documentary follows American soldiers who were living in Uday Hussein's bombed-out party palace in Baghdad in late 2003. That was about 10 months after George Bush, in his famous Top Gun moment aboard an aircraft carrier, declared that major combat in Iraq had ended. Saddam was still at large and the conventional wisdom was that as soon as he was found, the annoying insurgency would end.

As art, the documentary by Michael Tucker and Petra Epperlein, included in this month's Charlotte Film Society lineup, is kind of rocky. But it does accomplish something unique. It doesn't take a political stand on the war. Instead, it focuses on the surreal lives of a group of painfully young men (and one woman) who have become pawns in a war that has divided America as surely as the Vietnam conflict did.

No matter which side you sit on politically, it is agony to watch young men and women trying to make sense out of their experience while you wonder who is going to die before the film's end. There is no shortage of cynicism on the soldiers' part. This movie was made before the scandal at Abu Ghraib erupted and before a soldier publicly confronted Donald Rumsfeld about the way soldiers had to reinforce their under-armored vehicles with scavenged scrap metal. In one scene, a soldier cracks up his companions with a cynical description of the unsafe vehicles.

There are also nighttime scenes of the soldiers bursting into the homes of Iraqis to arrest people on the basis of intelligence information. While women and children cower and weep, men are arrested — usually with no weapons found — and dispatched to Abu Ghraib. You become aware of how that notorious prison, with its warehoused detainees and heartless torture, became a symptom of the broader insanity created by trying to fight an invisible enemy. The soldiers themselves often look as terror-stricken as the people they are arresting. Soldier after soldier says his job in Iraq is to get home alive. Politics don't seem to interest anyone.

How do they endure? Through humor, music and poetry. Nobody here adopts the tough-as-nails attitude of world liberators prepared to die for a noble cause depicted in countless World War II movies. Instead, the soldiers wholeheartedly embrace the absurdity of their situation. They host parties, splashing in Uday's pool while Rumsfeld declares on the radio, with astounding cluelessness, that Iraq is prospering.

The film's most poignant moments are of the soldiers interacting with Iraqi children. But nearly two years later, we watch this and know that the insurgency ended up wiring children with bombs. When a soldier gives an ambivalent child a figure of SpongeBob SquarePants, we are suddenly aware of the absurdity in which we ourselves live. Two years after the Iraqi child received the doll, the Rev. James Dobson claimed that the cartoon character is part of a gay conspiracy.

The soldiers' ability to transform terror into black comedy is personified by Stuart Wilf of Colorado. He becomes the documentary's literal muse, clowning before the camera in ways that are often politically incorrect and hilarious. But even more articulate than Wilf are the film's poets. Beating rhythms on vehicle hoods, they rap spellbinding descriptions of their experiences. "When those guns start blazing and our friends get hit/that's when our hearts start racing and our stomachs get woozy," raps one. "Cuz for y'all this is just a show/but we live in this movie."

How is it, I wonder, that amid the real terrorism of Baghdad these soldiers are able to view life with so much humor and heart while so many of us, comparatively safe at home, become increasingly fearful and supportive of right-wing agendas to control the bodies and minds of other Americans? The ancient Greeks required their citizens to attend theater festivals featuring tragedies that were often followed by comedies. Perhaps living amid actual tragedy naturally precipitates a reversal that makes it possible to open the heart and lighten the spirit. And perhaps that's why the reality of the ongoing war in Iraq is still largely hidden from Americans. As the soldier said, watching a movie like Gunner Palace isn't like living the real thing, but it can certainly open your eyes.