"Art is the receptor of vibrations — there's no logic behind it," says band leader Eugene Hutz

Eugene Hütz doesn't sit or stand still for long. When performing, the 39-year-old Ukrainian makes use of an entire concert stage, and it doesn't take long for his thin, often-shirtless frame to become drenched with sweat. If you think he needs a runner's endurance to last through a performance, it won't surprise you to learn Hütz was a champion marathon runner while growing up in Kiev. His conditioning serves him well. 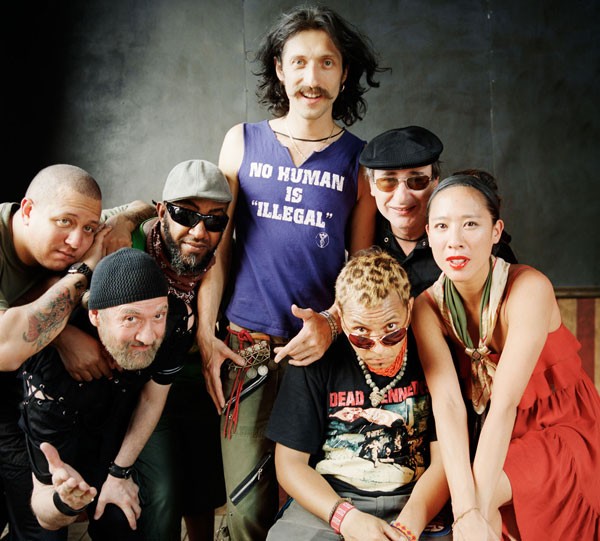 That infectious energy helps Hütz and his Gypsy-punk band, Gogol Bordello, land on countless lists of must-see live acts. You can scratch them off of your list when they perform at Charlotte's Fillmore on May 21.

Formed in New York City in 1999, the band is a conglomerate of nationalities — Russian, Israeli, Ukrainian, Ethiopian, Ecuadorian — which might lean the group toward the folk-rock spectrum's political side if not for the band leader's indifference.

"I just really don't fucking care about [politics]," Hütz says with a heavy accent. "I used to stand on top of it, more or less — without effort I was engaged in the whole global process, but eventually I think I just became wiser and I just couldn't give a fuck less about them. It all sounds like a joke to me — anarchist meeting or Republican convention both sound the same to me."

Hütz would rather get what he calls his "good vitamins" through positive energy and being "connected to the actual source of love in the universe where you have no political debates in your head."

After all, it's positive energy that drives Gogol Bordello and the swarms of worldwide fans who catch them on tour, where they play just about every music festival under the sun. Aside from actually being multi-national, Gogol Bordello is influenced by musics from around the world, something the group showcased at Bonnaroo in 2011. There, Hütz curated a stage that brought in Italian rapper Jovanotti, Syrian beatsmith Omar Souleyman and China's folk-rock band Hanggai, which weaves Mongolian throat singing into it mix.

One "pretty massive" influence on Hütz's songwriting is the music of Brazil, where he moved in 2008. "There are folkloric and modern gold mines which are undiscovered, and it's actually the fault of Brazilian musicians who never make an effort to get their music on the road," Hütz says. "There are really amazing rock bands, like Nação Zumbi, who could rock major festivals, but those guys don't even want to go to Argentina. For myself, it remains to be a pretty big part of my life to see Brazilian music and booty music or folkloric and rock."

Brazil's influence is apparent whenever Hütz sings in Portuguese, though multiple languages — Russian, Ukrainian, Romanian, Italian, Spanish and English — are commonplace for the singer. Despite any linguistic challenges for the listener, well-written, emotive music rarely needs translation.

"What it boils down to is that my style became macaronic, which is the word for a linguistic mix-o-rama," he says. "Ideally, I would like to write in a language that is comprised strictly of the words that exist in every language."

As for what drives the language he chooses to sing in? "Just the mood," he says. "Art is the receptor of vibrations — there's no logic behind it. If anybody tells you otherwise, they're some kind of strategist and you should punch them in the face."

A descendant of Gypsies, Hütz grew up in the Ukraine. His family fled after the 1986 Chernobyl meltdown, making their way through Europe and eventually to the United States. While his parents currently live in Vermont, Hütz spent years living in New York City, where Gogol Bordello formed in 1999. With all of the traveling these days, the United States doesn't quite feel like home anymore.

"Doing an American tour is almost exotic for us after flying to Brazil, Russia, Costa Rica — the United States is weird and different," Hütz says.

Aside from the emphasis on language, what also separates Gogol Bordello from the masses is instrumentation. You don't often hear a band playing spirited rock while incorporating an acoustic guitar, accordion and violin. "We just get out there and let people know what's up with real Eastern European musical imagination," Hütz says. "The thing is that we don't think about [so many nationalities in the band] as a big deal. It's not strategic. It's just how we roll."

There's no doubt the musical melting pot and variety of languages will be on Gogol Bordello's next album, which the band plans to record after its summer tour. Over the years, Hütz learned how to translate the group's live show in the studio. "When you go into the studio, you need to become a new band because what you do on stage doesn't fuckin' work," he says.

Hütz, the band's primary songwriter, says he has been working on the new album ever since the previous one was done. "The next morning, with the next cup of coffee, the new one starts," he says.

While some songs develop from his bandmates' input, others are completed — or at least completed in his head — when he brings them to the band. "It's ultimately about the song," Hütz says. "It needs to find its reflection in the band. Sometimes it's a symphonic idea with everybody wailing, and then it gets stripped down to something acoustic three years later and that's the best form, like alcohol. There was never really any formula to how we work. Here's the ship, I'm behind the wheel, but let's see how the sail gets turned."