It Looks Sad. Returns With New Lineup and New Album

After a few years of reorganizing, the indie-rock outfit It Looks Sad. is back with a new lineup and a debut full-length album, Sky Lake, on the way. Singer, songwriter and guitarist Jimmy Turner formed the band in Charlotte in 2012 and released its self-titled debut EP two years later. Drummer Alex Ruiz arrived soon thereafter, and It Looks Sad. followed up with the fuller-sounding Kaiju EP of 2015. During the interim, the band put out an EP of much mellower demos last year, Lost Songs. 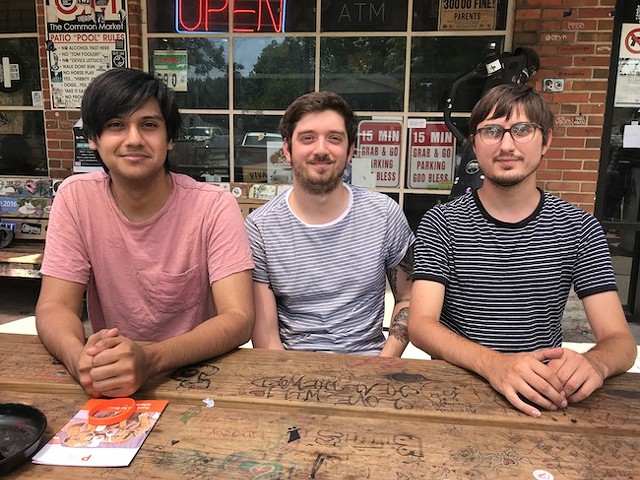 With new bassist Matt McConomy now on board, the trio will perform a show at Petra's on Friday, August 3, along with McConomy's old band Cuzco. Both outfits will be playing new songs from the albums each is currently working on. We sat down with the members of It Looks Sad. over beers and kombucha on the patio at Common Market to find out what's up.

Creative Loafing: That set of demos is very different from your earlier stuff. Will the new album be more emo, like Kaiju, or more chill, like Lost Songs?

Jimmy Turner: I'd say it's about a 50-50 split between songs that get big and then other songs that are more electronic and have strings and horns and found sounds and stuff like that -- almost interlude-y kind of things, you know; video game kind of stuff, just bleeps and things. So that's going to make it a little different from what people have heard from us before. It flows better as an entire album.

It's been about four years since we've released anything, so we've gotten into a lot more stuff since then. We figured, why not kind of show all of that?

Alex Ruiz: Jimmy likes to demo things and send them to me and we'll mess with it. And then when we get together, we make something that's louder, I guess. That's my job. [laughs] I'm the loud guy. I determine how loud a song's going to be.

Where did you record the new album?

Turner: Alex and I went to Memphis at the beginning of February and recorded the full-length at Young Avenue Sound. Calvin Lauber, who was Julien Baker's producer, was our producer, and that was really wonderful. It was a fun experience. It'd been almost three and a half years since we recorded anything, so it was exciting. We got to use the world's oldest drum machine on one track.

Ruiz: That was cool.

Turner: And the studio was next to the Memphis Drum Shop, which is the world's biggest drum shop.

Ruiz: Which was really cool for me. I knew about the shop. I'd seen it on Youtube, so it was pretty exciting to actually go there.

Matt, are you on the record?

McConomy: No, I just joined a month ago, so I'm still learning the songs. I quit Cuzco back in November, for lots of reasons, and I've been in flux for a while. I had posted a tweet complaining about the Charlotte Craigslist listings -- about how everybody's just looking for blues cover musicians. Jimmy hit me up and was like, 'We need a bass player. Wanna play with us?' I was like, 'Hell yeah!'

I understand you're going to be doing the Hopscotch Fest in Raleigh in September. Looking forward to it?

Turner: That's going to be fun, because the lineup is really cool. Liz Phair is playing and Julie Byrne is going to be there, and getting to see Kim Gordon [former Sonic Youth bassist now with Body Head] is going to be great. So yeah, we're really excited about that.

Look for new singles from Sky Lake in the next few weeks, followed by the full LP on Tiny Engines Records this fall. But in the meantime, here's the video for "Fingers" off the self-titled debut EP in 2014.