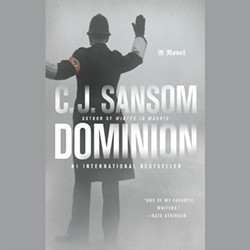 In the spring of 1940, Germany made peace overtures to Great Britain at the same time British forces were in retreat. Hitler, it was believed, would end the fight with Britain on the condition that Germany be allowed to do as it wished in Europe.

Exhausted by war, some in Britain wanted to consider a possible truce. In May 1940, British prime minister Neville Chamberlain, whose strategy of appeasement had failed time and again with Hitler and Germany, met with the Conservative chief whip and the two candidates under consideration to replace him as prime minister: Lord Halifax, also an appeaser, and Winston Churchill. The job was Halifax's if he wanted it. He didn't and Churchill replaced Chamberlain. Churchill vowed to defeat Hitler and the Nazis and, eventually, formed an alliance with the United States and Russia that led to victory in World War II.

C.J. Sansom explores an alternative history in his new novel Dominion: What might have happened if Halifax had become prime minister and then named his own war cabinet, a cabinet much likelier to negotiate a peace treaty with Hitler after the fall of France.

After a brief prologue outlining Churchill's near-miss to ascension, Sansom fast-forwards to London in 1952. Churchill's party has been forced underground after languishing in Parliament. Germany exerts increased influence over Britain, though England remains home to the only remaining free Jews in Europe. Still, the walls are closing in: All Jewish people must wear Star of David lapel pins in public.

Lord Beaverbrook, a real-life newspaper propagandist prone to appeasement and corruption, now runs Britain as prime minister. Germany remains at war with Russia, a 12-year slog that has yielded little more than millions of casualties — and Joseph Stalin hanging in effigy in Red Square. Adolf Hitler, rumored to be in poor health, has become the subject of speculation as jockeying ramps up between the army and the SS for control of Germany if Hitler dies. The United States, in Sansom's scenario, is neutral, but has discovered the key to making an atomic bomb. Adlai Stevenson has just been elected president.

This backdrop sets in motion the heart of the novel. Edgar Muncaster, a British scientist who has emigrated to America, returns home for his mother's funeral and, while in England, gets drunk and spills a terrifying, unfathomable secret to his unstable brother, Frank. His secret? Edgar, a physicist at a California university involved in weapons programs, has been part of the atomic bomb research.

The horror of this secret infuriates Frank, who shoves his brother out of a second-floor window and screams about the end of the world while destroying his flat. Edgar survives, but the suspicion of what exactly Frank knows leads authorities to commit him.

Frank, dulled by heavy tranquilizers, refuses to tell the asylum doctors what caused his breakdown. Both British and German spies ponder how they can kidnap him from the mental hospital to interrogate him while the Resistance (Brits who favor fighting Germany and installing Churchill as prime minister), tipped by American spies, wants Frank, too, hoping to keep his knowledge of the weapons from the Brits and Germans.

As one Resistance leader puts it, "The Norway campaign finished [Neville] Chamberlain. Some say if Churchill had got the premiership at that time, we'd have carried on the war after France fell. I wonder what would have happened then?"

We, of course, know that answer, leaving Sansom to toy instead with the much darker alternative. And what an intriguing alternative he creates. Torture, interrogation, safe houses, disguises and a thrilling cat-and-mouse chase through the real-life Great Smog that killed at least 12,000 people in London in 1952 keep Sansom's story roaring along. All of this and a midnight submarine mission off the British coast add up to a sparkling historical novel, balanced by political winks and nods and a cast of empathetic characters that includes a Slovakian woman named Natalia who just might be the most determined Resistance fighter of all.

Churchill appears in a late but memorable cameo, an aging lion who looks "pale, exhausted. ... Only when he had seated himself did Churchill turn and look at the three men standing by their chairs. It was a fierce, challenging look, the blue eyes still keen, the big square chin and the lower lip thrust out aggressively though the skin of the neck was loose and wrinkled."

At 629 pages, Sansom's novel makes its own aggressive statement, illuminating the perils of nationalism and incremental appeasement. Most of all, it's a terrific novel that makes you think even as you're swept up in the fate of Frank and his crew of rescuers.