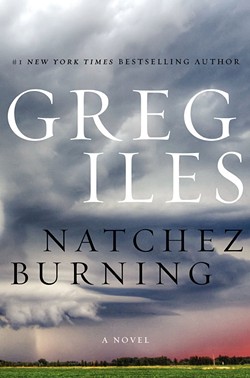 A hefty novel balancing Civil Rights history with murder, hate crimes, conspiracy and family secrets makes for a great summer read, if not quite an escape. After all, much of what Greg Iles writes and recounts either happened or could have happened.

In Iles' latest novel, Natchez Burning, Penn Cage, a prosecutor and writer in earlier books, now serves as the mayor of Natchez, Mississippi. Cage tells the story of unsolved hate crimes emerging after decades of silence, crimes that powerful people want kept hidden. Add in the author's résumé of thrillers and alternative histories, as well as his personal experience of living in Mississippi during the Civil Rights era, and you have the formula for a page-turner with heart.

Iles' father made him aware of the hate marches and robe-clad gatherings in the KKK hotbed of Mississippi during the '60s. And, much like Cage's father Tom, the local doctor who treats blacks and whites alike in the novel, so, too, did the elder Iles. With that as a foundation, Iles has created a cliffhanger using 50 years of hate crimes, obstruction of justice and unspoken sins that refuse to stay submerged any longer. This makes for a story filled with history — references to the murders of three Civil Rights workers in 1964 (on which the 1988 movie Mississippi Burning was based) abound, along with mentions of notables such as the assassinated activist Medgar Evers and the late writer Willie Morris — but never in an eat-your-spinach way.

Cage, with his small-town, Pulitzer-winning girlfriend, Caitlin Masters, and a relentless reporter named Henry Sexton from nearby Ferriday, Louisiana, begin working together to solve racially motivated killings of decades earlier. At the same time, Cage and Caitlin search for clues that will exonerate Tom, an aging doctor accused of murdering his former nurse. That former nurse, Viola Turner, left Natchez for Chicago during the 1960s after her brother was murdered, only to return during her final days. Tom Cage treated her and, based on suspicions raised by the district attorney and others, is charged with murder. Other suspicions loom, too: Did the white doctor and the black nurse have an affair? Is the stranger lurking around town their bastard son?

The consequences of sex between blacks and whites in the segregated South haunt everyone in some way in the book.

All of the characters are flawed, though some of the villains lack much in the way of redemption. Then again, plenty of real-life racists who escaped conviction and punishment for decades after committing hate crimes lacked human kindness and empathy, too.

Glenn Morehouse, an aging, cancer-riddled member of the KKK splinter group the Double Eagles, fears what eternity might bring as his death approaches. For that reason, he grants Henry Sexton an interview and tells the reporter some of the crimes committed and covered up.

Give credit to Iles for taking what at first seems to be implausible plot twists — racists in the middle of nowhere plot to kill Robert F. Kennedy and Martin Luther King Jr. — and rendering them believable. (Some real-life echoes exist, too, as inspiration.) Or, as Penn Cage relates, "Henry's revelations have left me speechless. This is the kind of thing you can never put into a novel, because it stretches credibility too far. Yet history is filled with such unbelievable coincidences."

Iles, throughout his story, comes up with enough twists to keep the story moving at a brisk pace, even over the course of nearly 800 pages. And, since this is the first installment of a planned trilogy, some major threads remain loose despite a satisfying ending.

Suffering and bad behavior abound, but Iles leaves the reader with enough slivers of hope to make the ride as entertaining as it is harrowing.