Capsule reviews of films playing the week of Feb. 15 | Film Clips | Creative Loafing Charlotte
Switch to the mobile version of this page.

Capsule reviews of films playing the week of Feb. 15 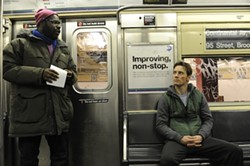 ALBERT NOBBS There's a towering performance in Albert Nobbs, and it sure as hell doesn't belong to Glenn Close. A labor of love for the actress, Close not only stars in the picture but also serves as co-writer and co-producer (and, lest I forget, she also co-penned the theme song, "Lay Your Head Down"). Yet in essaying the title role, a lesbian in 19th century Ireland who has dressed up as a man for 30 years in order to work as a butler in a Dublin hotel, she isn't especially convincing: Even accepting that she looks a bit like a fey, mummified Stan Laurel, viewers have to assume that everybody in Ireland suffers from poor eyesight to fall for this ruse. Couple her turn with the fact that her character is never afforded much in the way of backstory or defining traits or — heck — even a pulse, and it's hard to invest any interest in her difficult life. Albert Nobbs would be a slog if it wasn't for Janet McTeer. Like Close, she plays a woman who's spent years passing herself off in public as a man, and she's excellent in the part, allowing us access where Close only allows indifference. Her Hubert Page is a vibrant character, full of wisdom, inner strength (and external, as she makes her living as a house painter), life experience and passion (she shares a cottage with her lover Cathleen, played by former Commitments co-star Bronagh Gallagher). Close only comes to life in her scenes opposite McTeer; the rest of the time, she unwisely fashions her character as a riddle wrapped in a mystery inside an enigma. And while that designation might have worked well for Russia (at least according to Churchill), it's not adequate for a movie purportedly about the woman behind the man. **1/2

THE ARTIST Although its cribbing from Singin' in the Rain, A Star Is Born and more means that this black-and-white silent picture sometimes runs short on invention, it easily makes up for it in style, execution and a cheery disposition that's positively infectious. Jean Dujardin plays silent screen star George Valentin, whose chance encounter with a young fan named Peppy Miller (Berenice Bejo) contributes to her eventual rise in the industry. The pair clearly harbor feelings for each other, but George finds himself trapped in a loveless marriage (Penelope Ann Miller sympathetically plays his estranged spouse) and relies on his dog Uggie and his faithful chauffeur Clifton (James Cromwell) for companionship. The matrimonial strife soon takes a back seat to a dark development, revealed when studio head Al Zimmer (John Goodman) informs him about the inevitable advent of sound in motion pictures — a revolution that George myopically dismisses as a short-lived fad. Instead, this cinematic breakthrough all but destroys his livelihood. In crafting his homage to the silent era, writer-director Michael Hazanavicius crucially fails to include one of its key ingredients, that go-for-broke dynamism that informed much of the cinema of the time — think, for example, of that house really falling on top of Buster Keaton in 1928's Steamboat Bill Jr., or Harold Lloyd's eye-popping stunts in 1923's Safety Last! and other gems, or just about anything served up by Chaplin. Nothing in The Artist can quite showcase that sort of edgy genius, although a sequence that has wicked fun with sound effects is worth singling out. Yet while it may not match up with the best of the silents, The Artist matches up nicely with the best of 2011. Dujardin and Bejo are both enchanting and irresistible, and Hazanavicius' screenplay has no trouble shifting between mirth and melodrama. As for its visual appeal, the black-and-white images are as crisp and dynamic as anything on view in the year's color explosions, whether it's the luminescent paint jobs in Cars 2 or that vibrant rainbow connection in The Muppets. ***1/2

CONTRABAND A remake of a 2008 Icelandic thriller, Contraband is yet another in a long line of ignoble duds tossed out to help open a new movie year while the previous year's films are still busy collecting all the accolades. As far as January releases go, it's far from the worst — 18 years later, I still have nightmares surrounding the Chris Elliott comedy Cabin Boy — but it's nevertheless poor enough to securely earn its opening-month berth. Its foreign antecedent bore the moniker Reykjavik-Rotterdam, but perhaps mindful that many Americans would mistake these two major European cities for brands of beer, the action has been switched to New Orleans-Panama. But perhaps mindful that many Americans would mistake a movie called New Orleans-Panama for a travelogue, the title ended up being Contraband, which is so generic that it only reveals that the characters must be up to something naughty. The narrative wrongdoing begins with young punk Andy (Caleb Landry Jones), who foolishly agrees to transport drugs for the hair-trigger Tim Briggs (perpetually annoying Giovani Ribisi, whose entire career seems like one long epileptic seizure) and then finds himself in hot water when he's forced to dump the entire load. Luckily for Andy, his sister Kate (a miscast Kate Beckinsale) happens to be married to Chris Farraday (Mark Wahlberg), who used to be The Greatest Smuggler Of All Time. Now making an honest living, Chris reluctantly returns to the criminal fold, relying on the help of his best buds Sebastian (Ben Foster) and Danny (Lukas Haas) as he travels from New Orleans to Panama and back again as part of a plan to save his brother-in-law. Director Baltasar Kormakur actually played the Mark Wahlberg role in the Icelandic version, but whatever special insight he must have felt he could bring to this project was apparently lost in translation. There's nothing in Contraband that rises above the flagrantly mediocre, from its doorknob-dull characters to its rote storytelling. Even the casting exudes laziness: Seasoned filmgoers need only glance at the cast list to figure out which of Chris' allies will end up double-crossing him. Still, the script's betrayals pale next to the one perpetrated by filmmakers eager to dupe audiences into thinking they're paying for quality entertainment. *1/2