Capsule reviews of films playing the week of March 7 | Film Clips | Creative Loafing Charlotte
Switch to the mobile version of this page.

Capsule reviews of films playing the week of March 7 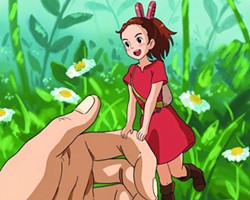 THE SECRET WORLD OF ARRIETTY An adaptation of Mary Norton's classic novel The Borrowers, The Secret World of Arrietty hails from Japan's Studio Ghibli, the only toon factory comparable to Pixar. It's understandable that the original Japanese voices have been overlaid with English ones for many international markets, but considering this dubbing already took place for the picture's UK release — and with noteworthy actors like Atonement's Saoirse Ronan and Sherlock Holmes' Mark Strong, to boot — did stateside distributor Disney really need to replace those British voices with American ones? Were they afraid Yank audiences might be too dumb to decipher the King's English? Whatever the daft reason, it's a good bet this film would still work even in Pig Latin, given the usual warmth and attention to detail invested in all Ghibli efforts. The story revolves around the title character (Bridgit Mendler) and her parents (Amy Poehler and Will Arnett), inches-tall people who live in their own makeshift home underneath a real house. Warned to avoid human contact at all costs, Arrietty nevertheless strikes up a tentative friendship with a sickly boy (David Henrie), a bond that inadvertently draws the attention of a cruel housekeeper (Carol Burnett). Leisurely related and lovingly crafted (I love how the miniature family uses canceled stamps as wall paintings), The Secret World of Arrietty is an oasis of calm in the normally hyperactive world of toon entertainment. ***

SHERLOCK HOLMES: A GAME OF SHADOWS If I wanted to see a movie featuring Indiana Jones, I would watch Raiders of the Lost Ark. If I wanted to see a movie featuring James Bond, I would watch Goldfinger. If I wanted to see a movie featuring Sherlock Holmes, I would watch — well, certainly not Sherlock Holmes: A Game of Shadows, which might as well be a period Expendables prequel for all the reverence given to the legendary sleuth. Sir Arthur Conan Doyle's Baker Street brainiac remains one of literature's greatest detectives, but because actions always count more than words in today's Hollywood, 2009's Sherlock Holmes reinvented the character as a kick-ass macho man, more Rambo than Miss Marple. Nevertheless, the freshness of Robert Downey Jr.'s exuberant portrayal as Holmes and the measured counterpoint provided by Jude Law as Dr. Watson managed to overpower Guy Ritchie's hyperkinetic direction. Not this time. Ritchie's showoff stylistics are often embarrassing to behold — this is particularly true in the action sequences, of which there are countless. As he battles his deadly nemesis Professor Moriarty (Jared Harris) and his minions, Holmes most often applies his formidable smarts not to uncovering clues but to enhancing his advantage in hand-to-hand skirmishes. Is this Sherlock Holmes or Muhammad Ali? Some silly asides, such as Holmes' camouflage coat, are best forgotten, but the steady bickering between Holmes and Watson has yet to reach the straining point (thank the ingratiating actors for that). And while Rooney Mara adopts the Lisbeth Salander role for the Yank version of The Girl with the Dragon Tattoo, the original's Lisbeth, Noomi Rapace, turns up here as a gypsy fortune teller. Her character's services aren't required to predict that Sherlock Holmes: A Game of Shadows will emerge as an international blockbuster, with audiences flocking to see a dizzying swirl of furious fisticuffs, blazing gunfights, and theater-rocking explosions. Me, I'll be home watching my Columbo box sets. **

THIS MEANS WAR When it comes to the twin businesses of sexual politics and romantic revelations, the number of modern-day comedies that have managed to smartly upend all the tired stereotypes and withering clichés is a dismally small one, sporting a losing ratio comparable to that of the 2011 Indianapolis Colts. This Means War is yet another casualty, losing the battle almost from the start. Chris Pine and Tom Hardy respectively play FDR and Tuck, crack CIA agents who are BFFs until they both fall for the same woman. That would be Lauren (Reese Witherspoon), a lonely workaholic who goes from having no boyfriends to having two guys fighting over her. With her best friend Trish (Chelsea Handler) offering her dubious advice, Lauren simultaneously dates both studs in order to determine her best match. For their part, FDR and Tuck are utilizing all the espionage tools at their disposal (satellites, wiretaps, etc.) to thwart the other fellow in his amorous advances. In popcorn-picture terms, it has promise, and indeed, there are a couple of sequences in the midsection that fulfill the film's potential. But for the most part, the movie is a clumsy mess, replete with a worthless subplot involving a cardboard Euro-baddie (Til Schweiger) seeking revenge. As far as the characterizations are concerned, they follow the same outdated playbook that's generally kept under lock and key by Katherine Heigl to use in her films. Lauren comes across as a ninny, FDR is insufferable, Trish is like all married women in movies (alcoholic, bitter, and living vicariously through her hot, young, single friend), and Tuck's ex (Abigail Leigh Spencer) has no interest in a sensitive, caring father until she learns he can beat the living hell out of people. It's safe to assume that only Hardy (and his pursed lips) will escape from this debacle unharmed. As for the resolution of the romantic dilemma ... well, let's just say that the filmmakers would have been hard-pressed to come up with a worst ending. But then they tack on a ghastly epilogue, and what seemed near-impossible becomes a harsh reality. *1/2