Capsule reviews of films playing the week of Nov. 2 | Film Clips | Creative Loafing Charlotte
Switch to the mobile version of this page.

Capsule reviews of films playing the week of Nov. 2 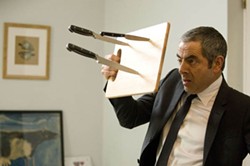 CAPTAIN AMERICA Even moviegoers suffering from superhero burnout might want to stand up and salute Captain America, which doesn't match the excellence of X-Men: First-Class but ranks ahead of fellow summer stablemates Thor and Green Lantern. I've long held a soft spot for 1991's The Rocketeer and 2004's Hidalgo, two box office underachievers that refreshingly stripped away the modern era's automatic coat of cynicism and instead delivered old-fashioned thrills with no trace of irony or condescension. Both films were helmed by Joe Johnston, and coming off the disastrous monster muddle The Wolfman, he's back in his gee-whiz element here. Chris Evans stars as Steve Rogers, a scrawny kid whose 4F status repeatedly prevents him from being accepted into the army during World War II. But responding to the youth's inner decency rather than his outward lack of muscles, a kindly scientist (Stanley Tucci) turns him into the ultimate super-soldier. The sickly Steve Rogers now sports a Charles Atlas physique, and he eventually goes after the man who has emerged as his arch-nemesis: Johann Schmidt (Hugo Weaving), a Nazi whose use of the same serum has transformed him into the appropriately named Red Skull. As expected, the movie has the requisite CGI bombast, although the most unique visual effect involved digitally altering the buff Evans so that he would appear emaciated in the early sequences — an approach that works far better than the technique for which The Curious Case of Benjamin Button managed to grab a Visual Effects Oscar. Aside from the effects, the movie generally takes a decidedly more low-key approach, both in tone and performance. Balanced enough to offer entertainment to young and old alike, Captain America should make us all proud to be moviegoers. ***

CONTAGION An entertaining if unwieldy cross between a PSA and one of those all-star idiocies from the 1970s — those disaster flicks involving hijacked planes, hurtling meteors or towering infernos — Steven Soderbergh's Contagion tracks the entire cycle of a disease that begins with one person and ends with the deaths of millions of people worldwide. Episodic in the extreme, the picture mostly follows the scientists and health officials tasked with finding a cure — considering that Marion Cotillard, Kate Winslet and Jennifer Ehle are cast in these roles, one gets the impression that being a physical beauty is a requisite to landing these sorts of jobs. Representing Everyman, meanwhile, is Matt Damon, an ordinary joe whose wife (Gwyneth Paltrow) is the first victim of the disease (that's no spoiler, as she dies within the film's first 10 minutes and is sporadically seen in flashback thereafter). And then there's the online activist (Jude Law) who believes that it's all some government conspiracy and states that he possesses a tried and true antidote. While it's comforting to see all these fine actors gathered in one place (the cast also includes Laurence Fishburne, Elliott Gould and Winter's Bone Oscar nominee John Hawkes), the film simply doesn't have enough time to properly devote to each of these characters, meaning we only get broad strokes rather than emotional investment (one likable character dies off-screen without our knowing it, with his/her passing barely mentioned). Where the film works best is in its condemnation of the all-mighty power of the Internet and its self-proclaimed prophets, as repped by Law's opportunistic and misleading blogger. If nothing else, Contagion will at least be remembered for the great line uttered by one of its brainiac characters: "Blogging isn't writing; it's graffiti with punctuation!" **1/2