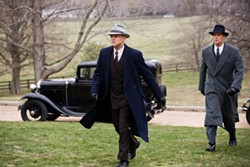 MONEYBALL Like a businessman settling into his recliner after a hard day's work, Brad Pitt has slid into middle age with an ease that's both pleasurable and enviable to watch. Pitt's always been a fine actor, of course, but around the turn of the century, he's really upped his game, from his quirky turns in Snatch and Burn After Reading to his scene-stealing subterfuge in those Ocean's films to his thoughtful interpretations in The Assassination of Jesse James by the Coward Robert Ford and The Tree of Life. (Go figure that my least favorite Pitt performance of late, as Benjamin Button, is the one that nabbed him an Oscar nomination.) Moneyball, directed by Capote's Bennett Miller and adapted from a true story by the powerhouse team of Aaron Sorkin (The Social Network) and Steven Zaillian (Schindler's List), finds Pitt as his most dynamic; he's cast as Oakland Athletics general manager Billy Beane, who in 2001-2002 is tired of losing both games and star players to better funded baseball teams like the Yankees and the Red Sox. Refusing to continue adhering to the old-school philosophies preached by his assemblage of geriatric scouts, he instead discovers a newer religion being espoused by Peter (Johan Hill), an economics major from Yale who possesses a love for the game and a head for numbers-crunching. Employing a math-based system (sabermetrics, created by Bill James) that finds the value in underappreciated players deemed as too old/awkward/iffy by other organizations, Beane starts collecting these diamond castoffs as if they were baseball cards in the hopes that they'll coalesce into a winning team. Whether or not one subscribes to the "moneyball" philosophy — it's worked well for some teams, not so great for others — is irrelevant when it comes to enjoying a motion picture that takes a potentially arid subject and makes it sing on screen. Its success has less to do with Bennett, whose mise en scenes show little variance (a similar staidness also dogged Capote), than with the scripters and the actors, all of whom exhibit a quicksilver strategy in keeping this thing popping. Put this one in the W column. ***

PUSS IN BOOTS Stanley Roper was arguably the funniest character on the long-running TV series Three's Company (not a difficult feat, admittedly), but that didn't mean it was wise to yank him and the missus out of their supporting stints on that hit show in order to place them front and center in a sitcom (The Ropers) that barely lasted a year. Similarly, Jennifer Garner's Elektra worked well in tandem with Ben Affleck's blind superhero in Daredevil, but absolutely no one cared when she was given her very own starring vehicle. So even though Antonio Banderas' Puss in Boots owned the Shrek franchise from the moment he was introduced in the second film, that was no reason to elevate him to, erm, leading-cat status in Puss in Boots. Certainly, the fault doesn't rest with Banderas, who's as game as ever. But this animated effort wants to have it both ways: It retains the sort of tiresome, snarky humor that defined the Shrek series while also trafficking in the type of obvious morals found in more traditional toon fare. The end result is a listless movie that doesn't have much to offer beyond keeping the kids quiet for 90 minutes. The plot concerns the uneasy alliance between Puss, the equally accomplished Kitty Softpaws (Salma Hayek, re-teaming with her Desperado co-star) and the annoying Humpty Dumpty (Zach Galifianakis) as they attempt to first steal three magic beans and then the fabled Golden Goose. There are a handful of amusing exchanges ("I thought a cat always landed on its feet." "No! That's just a rumor spread by dogs!"), but for the most part, the stale wisecracks are on the order of "First rule of Bean Club: You do not talk about Bean Club." With soft lobs like this, it's clear Puss in Boots is one movie that was declawed before it even got close to the screen. **

REAL STEEL Not nearly as awful as its premise and previews might lead one to believe — hey, how's that for a ringing endorsement? — Real Steel should prove to be a modest surprise to those who had been expecting nothing more than a Transformers-style blend of CGI cacophony and callow characterizations. Although loosely based on a Richard Matheson story ("Steel") that was previously dramatized in a 1963 episode of The Twilight Zone starring Lee Marvin, Real Steel has been described in some quarters as Rock'em Sock'em Robots: The Movie and in others as an update of 1987's Over the Top, the lame Sylvester Stallone vehicle about a wash-up who travels the country entering arm-wrestling competitions while trying to bond with his estranged son. Neither viewpoint is exactly a stretch, but Real Steel has a Weapon X in Hugh Jackman, who delivers a rousing performance as Charlie Kenton, a former fighter who's now reduced to promoting robot boxers on the underground circuit (in the film's near-future setting, all boxing matches are between robots, not humans). Charlie is surprised to learn he has a young son, Max (Dakota Goyo), but the kid proves to be an asset as Charlie tries to move up in the sports world. Whether it's the chemistry between Jackman and Goyo or the guiding hand of noted humanist filmmakers Steven Spielberg and Robert Zemeckis (both on hand as producers), Real Steel mines some real emotion out of its hopelessly cliched father-son tale. As for the effects, they're excellent, effortlessly placing the computer-generated 'bots in real-world surroundings. Sincere but silly — I could have done without the cringe-worthy dance routines between boy and robot — Real Steel is a rocky version of the Rocky template, but it exhibits a beating heart under all that heavy metal. **1/2