A night at the Vision Awards 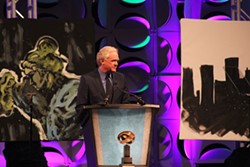 More than 10 years ago, David Furman built Uptown's first high-rise condo building. Could he have known then that Charlotte would eventually become the second-fastest growing big city in the U.S.?

For a few evening hours on April 23rd, the pulsing business community converged in the Charlotte Convention Center for an evening of free booze and spirited chatter about change and growth. A packed crowd gathered to recognize some of the Queen City's most influential citizens and businesses. Charlotte Center City Partners's Vision Awards had returned, and Furman, a Charlotte native and architect of over 35 years, had landed a spot in the limelight.

But before Furman took the stage, Mayor Dan Clodfleter first celebrated this year's roster of individuals, businesses and organizations that have "made the Center City a more vibrant urban core." At least, that's what the event program said. Joining the ranks of those who have impacted Center City's ongoing growth are BB&T Ballpark, Phat Burrito, Crisis Assistance Ministry and Charlotte Ballet.

But it was Furman's night. He was the recipient of this year's Vision Award for his work in making Center City a place for all.

We talked with the developer just hours before the event about some of his projects dedicated to housing the homeless and making our city a true urban core.

"I'm on the 20th floor of a building looking out the window," Furman said, "and I'd love to see all of these parking lots be filled in so that when you walk down the street, it's like walking down a street in a real city where you don't have the gaps that we get with the service parking lots."

Those lots sprinkled throughout the city are windows of opportunity for making downtown a more cohesive urban center, Furman said.

Uptown Charlotte has been booming with growth since the last recession, somewhat mirroring the go-go days of the banks, said Furman. Today, he's dabbling in mixed-used projects, hoping to combine offices with living spaces and even disguise necessary parking garages.

"I would love to create a downtown where my kids would like to live. My kids live in bigger cities; they live in D.C., and Berlin, and those are great cities," he said.

With all of new development burgeoning in Uptown's surrounding neighborhoods, and the subsequent frustrations, we had to ask Furman how he deals with the sometimes-negative connotation of being a developer.

He laughed. "Neighborhoods really have more of a drawbridge mentality that 'I've got mine and I don't want anybody else to come in and have a piece of that.' Everything I do is in the urban realm just because of that," he said. "Sometimes there's a legitimate difference of opinion in what makes a good city and what doesn't, and that tends to manifest itself more in the less dense suburban neighborhoods."

As any visionary might tell you, there's always a plan in place. For Furman, his projects are tied to a bigger undertaking — the 2020 Vision Plan for Charlotte, which strives to create a "viable, livable, memorable and sustainable Center City." It was adopted in 2011 and is a collaborative effort thanks to the works of the City of Charlotte, Mecklenburg County and Center City Partners.

One of the reasons Center City Partners chose Furman for their Vision Award is for his work in creating housing for low-income residents and those experiencing homelessness. One of these projects is First Ward Place on 8th Street.

Furman's got a unique perspective of how the Charlotte community must grow with the city.

"I think [providing affordable housing is] valuable because a community is only as strong as everybody there, and what's good for everybody in the community is good for me personally. I think that's a tough concept for people to get their arms around, that if you help those in your community that need help, ultimately your whole community is stronger and you personally are stronger because you live in a stronger community," Furman said.

Fast-forward to Thursday night at the Convention Center, where former Charlotte mayor Harvey Gantt praises Furman for his philanthropic spirit. "For David, it isn't enough to build for those who can simply pay the price of those condos," Gantt said. "David and his wife Marilyn bring passion and innovation to a commitment to social justice."

BB&T Ballpark, which was completed last year, was honored for its patience and determination in bringing baseball back to Charlotte through a pivotal land swap.

Phat Burrito, a small business pioneer in South End, got some hoots and hollers from the audience for its delicious food, "colorful character" and community friendly vibe it's had going for 17 years.

Exactly one year after changing its official name, Charlotte Ballet was recognized for its premier work in raising the profile of Charlotte and bringing international flair through talented artists and programming.

Crisis Assistance Ministry also received an award for its service to families temporarily struggling and their dedication to "preserving dignity for Charlotte-Mecklenburg's working poor."