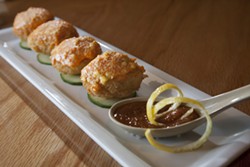 Tired of sushi yet? The next big culinary offering to come this way from Japan is izakaya, the Japanese permutation of Spanish tapas — small plates of bar-type food consumed with large amounts of cold beer or saki. These dishes come in the form of fried items: tempura, a panko coating, grilled skewers and simmered dishes, or nimono.

Chef and owner Marvin Minoda has recently added izakaya to his menu. Minoda, a native Charlottean, has been in the Japanese restaurant business since he waited tables at the first Nakato on Independence Boulevard while in high school. When he expressed an interest to cook, Minoda recalls, "Old Mr. Nakato told me I would never cook since I didn't speak Japanese" — a language his busy parents had not taught him. Not discouraged, Minoda moved to Raleigh and got a job cooking in a teppanyaki restaurant there.

By 1992, he and business partner Richard Byrd bought the Kabuto Japanese Steakhouses in Charlotte, which were in bankruptcy. Today he co-owns the Kabutos on Pineville-Matthews Road and Tyvola Road. But the Tyvola location, where Minoda heads the kitchen, is undergoing significant changes. The new name of that restaurant is Minoda's Japanese Steak House, Sushi Bar & Izakaya. Signage reflecting this change will be up next month.

During the growing season, most of the vegetables Minoda uses are from his farm in Lincolnton, N.C. Freshness is essential to the dishes he creates. Two years ago, he started experimenting with a small izakaya menu. Today, 80 izakaya dishes populate that menu. Recently, Minoda switched to Black Angus beef exclusively. He made these changes when he observed restaurants in his ancestral homeland were changing. He and Miho, his Japanese-native wife who also works in the restaurant, go "home" every other year and subsequently update their offerings.

The main culinary shift Minoda experienced in Japan is the gravitation toward heat. "Right now, it's like the U.S., but a little spicier," he says. He terms this style of cuisine in Japan "New Age" and serves it as well as traditional dishes in Minoda's.

The restaurant's slightly archaic structural charms are diminished only by the acoustics in the echoey room. The teppanyaki room has several griddle tops and many conversations. Sushi and izakaya are served in a casual area with wooden booths. Although sushi is typically not on the menu at an izakaya, it is here. The sushi bar is manned by Minoda's son Jason.

But we came for izakaya. The baby octopus flavored with a spicy sauce was a sultry antidote to a cold day. Soon, our table was covered with plates. For his defining izakaya dish, Minoda showcases his Charlottean and Japanese roots: inventive fried deviled eggs lightly coated with panko crumbs, flash fried, and served with a piquant Baja sauce, one of the original 20 house sauces Minoda creates. Less well received were the chicken katsu, muffled by batter, and the fried salmon wontons — never a good idea. But the snappy tofu cubes with dashi sauce quickly disappeared, while the skewers, especially the young scallions rolled in sirloin, are quite delicious. Several ramens, and other soups, are served all day, and Chef Minoda prides himself on his 16-hour tonkotsu pork stock.

The prices for the izakaya menu run from $2 to $8 — cheaper than sushi and more imaginative.