This Queen City native has earned a well-deserved crown.

Cheslie C. Kryst, a 28-year-old from CHARLOTTE, North Carolina, was crowned as Miss USA 2019. A beauty pageant queen, civil litigation attorney, fashion blogger, and more, Cheslie also makes time to serve our local community. She was recently accepted into Leadership Charlotte, Class 40, and volunteers with Dress for Success Charlotte. Cheslie won the title of Miss North Carolina on her third attempt, and made history as the oldest contestant to ever be crowned Miss USA. Cheslie lives with a can-do attitude and credits her success to her loving and supportive family and her ability to learn from failure. For those who want to learn more about Miss USA 2019, keep reading. 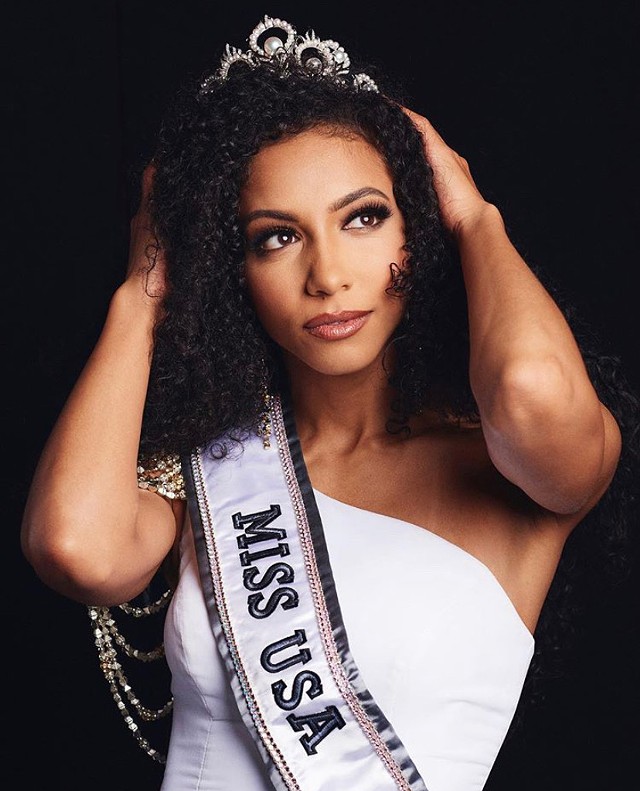 The beauty queen is also a star athlete. Cheslie competed as a Division I student-athlete at the University of South Carolina. Cheslie dominated both academically and athletically. She competed for the Gamecocks track and field team in the long jump, triple jump, and heptathlon. She landed in the programs record books as a top-10 for the triple jump. Making her health a priority, Cheslie wakes up before 5 a.m. every day to workout.

Cheslie impressed the Miss USA pageant judges with her beauty and her brains. Cheslie is a double graduate from Wake Forest University School of Law and Graduate School of Business. She earned both her Juris Doctor Degree and her Master of Business Administration. As a student at Wake, Cheslie and her trial teammates won the AAJ Student Trial Advocacy Compe­tition National Championship. During the Miss USA pageant, many judges applauded her response during the highly scrutinized question round. Cheslie delivered an eloquent and affirmative response when she was asked about the #MeToo and #TimesUp movements.

Cheslie is the founder of the lifestyle blog – White Collar Glam. Described as “Your source for workplace fashion inspiration and resources." Cheslie says the blog exists because she struggled to find appropriate, affordable, professional clothing. The blog features weekly articles about timely and relevant topics.

Cheslie credits her success, in part, to her ability to learn from failure. “Success consists of going from failure to failure without loss of enthusiasm.” – Winston Churchill Cheslie tells ncbarblog.com this is a quote she lives by. "This quote has been on a sticky note stuck to my computer monitor since I began practicing in 2017. I’ve come to realize that many of the successful people I know aren’t superhuman — they just kept going."

Cheslie is an attorney who spends part of her time working on the behalf of prisoners, for free. Today, she specializes in complex civil litigation working for Charlotte's Pyner Spruill law firm. In December 2018, Cheslie celebrated officially being licensed in two states, North Carolina and South Carolina.  She described this as one of the proudest moments of her life. "Praise God for helping me to remain undefeated on the bar exam!!" she wrote in a post on Instagram.


Cheslie described her generation as innovative in her final word at the Miss USA 2019 pageant. Question: Millennials are often labeled as entitled but they have been also called one of the most socially conscious generation in decades. What is one word you would use to describe your generation? And why?
Cheslie: “I would say that my generation is innovative. I am standing in Nevada in the state that has the first majority female legislature in this entire country. Mine is the first generation to have that forward-looking mindset that has inclusivity, diversity, strength and empowered women. I am looking forward to continue progress with my generation. Thank you.”

A post shared by Creative Loafing Charlotte 𖤹 (@creativeloafingcharlotte) on May 5, 2019 at 3:00pm PDT

Cheslie’s legal work for prison reform has her crossing paths with Kim Kardashian. TMZ reported earlier this week that Cheslie is working with Brittany K. Barnett, the lawyer who just secured the release of Jeffrey Stringer, who served 22 years of a life sentence for a low level drug case. Kim is funding these legal efforts in what she describes as “life saving work.”

We did it again! Had the best call w/this lovely family & my attorney @msbkb who just won release for their loved one Jeffrey in Miami - he served 22 years of life sentence for low level drug case. He served too much time but it gives me so much joy to fund this life saving work. pic.twitter.com/pbYicKmFpJ

According to the MISS UNIVERSE website, “After a winner is crowned, she is relocated to New York City where she will meet her new Miss Universe family. Through the organization, the winner is provided a platform for possibility based on her objectives for the year. Alongside The Miss Universe Organization, she will plan how to achieve her goals on the national and global scale.”

During her May interview with the Charlotte Observer, Cheslie told the publication that in the event of a Miss USA win, she'd likely "put her law career on hold, sell her car, move to New York City, and live largely out of a suitcase for the next year.”

Cheslie will represent the United States at the Miss Universe pageant at the end of this year.
Congratulations Cheslie!