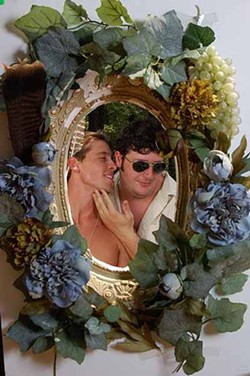 For Charlotte, Eric Deines has been one of those people. Deines (pronounced Dy-nas) may have only moved here in 2005, but as co-chief at Kinnikinnik Records with Bo White, gig booker, leader of benga-flavored rockers Black Congo NC, and host of Chalet 2000 house shows, he made his presence felt.

After forming Black Congo Indiana as a solo project in Bloomington, where he went to school, Deines re-state-ed the band (only 48 left!) and together with Ryan Miller played the first BCNC show in 2006. White soon joined, and BCNC eventually grew into an exciting sextet best known for seamlessly melding benga grooves in with the rock. Deines also had a side-project, the French & Indian War.

But even now that the 27-year-old is headed back to Indiana, where he'll be working for the Jagjaguwar/Secretly Canadian/Dead Oceans indie empire, he still plans to keep a presence in the Charlotte scene.

"This is a once in a lifetime opportunity for me," Deines said of his new gig. "But as we speak the Black Congo Illuminati are convening to discuss ways to continue; for the moment we are bi-state."

BCNC has plans for an upcoming release, and Kinnikinnik's growing regional and national profile (see their X-mas compilation, below) will also include Deines. As a publicist working with booking agents, he says he'll also be doing what he can to change Charlotte's official "third-tier" status for touring indie acts.

"By and large I saw a lot more excitement here for [indie] shows than in Chapel Hill," he said.

That commitment, and his eclectic musical tastes, endeared Deines to many. White, BCNC's guitarist, said, "Eric is a blast to play music with. I knew it was a good sign when the early band practices were cut short to hang out in the hot tub."

Thomas Berkau of Yardwork, the local octet that released their debut EP on Kinnikinnik this year, said of Deines, "Eric is a great guy. He has brought countless bands to Charlotte, and has made sure that they want to come back. He has played a huge role in creating our community and has kept it strong. He also has beautiful teeth. He will be missed!"

But perhaps Deines' legacy was best summed up by co-conspirator and BCNC saxophonist Brent Bagwell.

"Eric is that rarest of combinations: a songwriter and guitarist with a singular vision, but the confidence to recruit (often wildly disparate) players and turn them loose on his tunes, knowing that we can all make them better in that 'sum-of-the-parts' way," Bagwell wrote by e-mail. "Plus, his lyrics are the real deal: he's got his heart on his sleeve in this indie rock sea of post-everything irony. His role as a promoter and organizer can't be overlooked, either ... that's the other side of the equation that creates the type of fertile environment that enriches everyone, pushes local musicians, and makes for good fun."

El Diablo will fondly remember Deines for his top-notch sense of humor (cf., accompanying photo), quality gigs (Extra Golden!), the "Seagull" crescendo and a refreshing honesty and humility that many could learn from.

Merrie Compilation! Speaking of our friends at Kinnikinnik, the label's annual Yuletide compilation is out and about, and Another Merrie Kinnikinnik might just be the bestest holiday surprise going since you found yourself under the mistletoe with that dreamy co-worker. The collection features 22 top-notch seasonal-flavored cuts from a host of local acts both up-and-coming (Foxchase, Human Pippi Armstrong, Yardwork, Andy the Door Bum) and veteran (Buschovski, tenspeed, George Brazil), as well as contributions from Athens' Javier, Savannah's Marie Bryd Land and Uncle Owen Aunt Beru and Brooklyn acts Peace In and Unsolved Mysteries. Lunchbox Records has a limited supply of color-art copies, and the songs are available for download through Kinnikinnik's MySpace site and our pals at Shuffle magazine.

New Year's Bashes: Plenty of choices this year for those who to choose to ring in the New Year with a crowd and live music. The Milestone is hosting its 4th Annual New Year's Eve Extreme with Emotron, Randy Burke, Sonic Death Rabbit and Harry Egypt Extreme Karaoke; The Sammies, The Huguenots and DJ Animate rock Auld Lang Syne-style at Snug Harbor; Neighborhood Theatre gets a visit from the Paul Thorn Band; Amos' Southend and Purgatory host "A New Year's Evil," billed as Charlotte's "sexiest NY Eve Party"; Simplified plays the Visulite; this here publication presents a Double Door New Year's Eve with the Jamie McLean Band at the venerated venue, and some act named The Avett Brothers plays Belk Theatre, though we hear those tickets are spoken for.