A year of listening dangerously locally 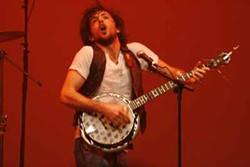 Another year in the books, and certainly a memorable one for local music. Aught-eight saw The Avett Brothers continue the band's steady ascent, signing to Rick Rubin's American label and packing houses from Seattle (3,200) to Cary (7,000). Benji Hughes' classic songwriting finally got the national attention it's long deserved, and his double-disc debut on New West earned plaudits from critics across the spectrum. Though highest in profile, Mssrs. Hughes and Avetts were just the tip of the local iceberg:

• Healthiest Trend: Seeing veteran and younger acts co-bill, not to mention members cross-pollinating, thereby subverting the age-ism/jealousy that often cripples local scenes. Sadly, audiences seem to be lagging behind, and that includes young'uns for whom "cutting edge" is all that matters and oldsters whose "it was better back then" shtick is nostalgic crap.

• Plaza Midwood: You can go from an afternoon acoustic gig at Common Market or Pura Vida to an early-evening free jazz workout at Century's Patchwerk Playhaus or a hardcore show at Lunchbox Records (both donations-only venues, by the way), and cap the evening with a rawk show at Snug Harbor.

• Fool's Brigade: Consider the logistics -- a dozen or so local bands crammed into a five-hour time slot, plus a rotating-cast house-band culled from a few makeshift rehearsals, all delivering by-and-large compelling covers of the annual Fool's Brigade artist of choice. Previous tributes have included Tom Waits and CBGB, the birthplace of punk rock, and it seemed unlikely the quality-to-fun ratio of '07's Kinks' show could be topped, but '08's Bowie tribute may have done it. Befitting the charity event's growing profile, there's talk of moving 2009's to a larger venue. By the way, this year's tribute artist has not yet been divulged, but check back here for details ...

• Fillmore Club at NC Music Factory: Slated for a late-Spring '09 opening, some have suggested the LiveNation/Fillmore connection could finally allay Charlotte's third-tier status for touring acts and their booking agents. A projected 2,000-capacity venue would, the argument goes, lure mid-tier artists who either play Ovens or skip town (usually the latter). Skepticism is our life-blood, but the thought of fewer round-trip pilgrimages to the Orange Peel or Cat's Cradle makes it worth believing in.

• The CMAs: This exercise in nepotism is a self-congratulatory reach-around for the event's promoters and sponsors that lacks any credibility. It's also out-of-touch with the city's current music scene. But to see it taken seriously in the media is worse. Other than a muckraking expose of its sordid inner workings, it should be ignored much as you would any loud, over-compensating braggart.

Raised by Wolves -- Return to the House of Ill Repute

After years of show-going and piles of promos, memories tend to blur together in this business. So when moments truly stand out, it's testament to their transcendence. Here's what we'll remember from '08: