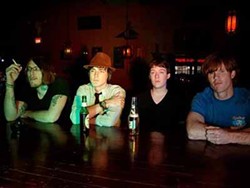 Hearts, Inc., the one-and-done full-length from short-lived Charlotte act The Young Sons, doesn't fit the rock-fable template of What Might've Been because it's wound up being more of a cautionary tale about What Really Never Was.

Led by two strong-willed songwriters whose similar musical interests could only mask for so long a turbulent relationship and divergent career paths, the band's sole disc will stand as the final testament to a promising beginning overshadowed by an unpleasant end.

That the songs -- half written by former The Talk leader Justin Williams, and half by Jon Phillips (Benji Hughes) -- will see a digital release on iTunes on March 17 practically qualifies as a miracle, and remains a sore point between the two. Five minutes into extended conversations with both, it's apparent they don't see eye-to-eye on much -- from what the Young Sons were meant to be to minutiae like on-stage mic stand placement.

First, some background. Despite growing up in the Charlotte scene and playing music in the same circles, Phillips and Williams (at 32, five years older) didn't cross paths until 2007. Williams was back in town after a stint in L.A. when he caught a Raised by Wolves show with Phillips playing keys. The two talked and discovered similar musical interests. They rounded up a drummer (ex-Bellglide John Cates) and bassist (Justin Turner, ex-Stone Figs), and began booking gigs.

A record was the next logical step, and in spring of 2008 basic tracking was done in Carrboro, with Phillips and Williams going up on weekends for overdubs. But between gigs and extensive partying, the record-making dragged on,. In the meantime, Mike Mitschele (Alternative Champs) replaced Turner on bass, who had moved to L.A. But after a September gig last year in Greenville, S.C., an argument resulted in Williams leaving the band.

"We each came in with equal kinds of strengths and blustery egos and that's what made it really rock and work for a while, but that's also what kind of doomed it," Phillips says, who added guitarist Peter Gray (Buschovski, Benji Hughes) to the line-up, which now goes by The Catch Fire. "Things are lighter, the vibe is lighter, there's no tension, there's no stress -- I'm not saying it because (Williams) is gone -- maybe it's a two-way street as far personalities not vibing, and no one's blaming anything on him or not wishing him the best, but it was just an unworkable environment at the end."

Williams doesn't dispute that, if for different reasons. Still, what to do with the nearly-finished record? Williams says he initially didn't want his songs on there, and suggested the remaining members release Phillips' songs as an EP.

"The whole idea for me was to make this kind of lo-fi, garage-y sounding record," Williams says, "but it started sounding more and more like I didn't want it to sound. I always had problems with some of John's songs, too."

Phillips and the rest of the band wanted to release the full album as a document of the year-plus they'd played together. Whether Williams relented or acquiesced, the band put up the initial recording costs, and Hearts, Inc. was mixed for limited release.

"Sure, if it would have had the same momentum at the end that it did at the beginning, then it would have sounded 200 times different and better," concedes Phillips, "but our whole feeling on it, and I still believe this, is that they're good songs."

Williams has since put together an analog-only studio in his home and is also wrapping up a full-length for his 12,000 Armies solo project (myspace.com/12000Armies). He plans to move to the Triangle in July. The Catch Fire has a six-song EP in the works and several live dates coming up (myspace.com/TheCatchFire). Phillips has finished a six-song EP (three cuts were done at Williams' home-studio to square the books between the two), Magic Winter & the Dirty South, due out this month under his solo moniker, Jonathan Lindsay, and is recording a full-length with Chris Walldorf at Sioux Sioux Studios for release this summer.