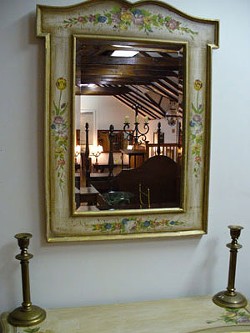 Charlotte is more haunted than people think, says Stephanie Burt Williams, a fourth-generation Charlottean and author of Ghost Stories of Charlotte and Mecklenburg County. "People are shocked to learn there are ghosts in Charlotte."

Williams took a more journalistic approach to the telling of ghost stories, including histories of haunted properties. She gathered the 19 stories from a variety of sources. The North Carolina Reading Room at Charlotte's library kept a file of ghost story clippings that had appeared in The Charlotte Observer over the years. She also made cold calls to businesses and restaurants, which is where she found out, for example, about the ghost who haunts Alexander Michaels.

"Once you find someone who believes in ghosts, they can usually tell you about the next one," says Williams. She did run into several "old Charlotte institutions" that wouldn't allow her to print any stories about their buildings being haunted. "Some businesses are very open about it. There are some bed and breakfasts that say, 'yeah we're haunted. Please come stay with us and maybe the ghost will tickle you in the night.' Other people take the opposite stance."

The creepiest haunting story that Williams encountered in her research was at an old plantation in Huntersville haunted by a child who died years ago of pneumonia. Whenever the homeowners take a shower, a child's handprint appears in the steam on the glass. Children's toys in the house are frequently found moved to other rooms.

Williams, who has just published another book on sinister Charlotte tales called Wicked Charlotte: The Sordid Side of the Queen City (she'll be appearing at Park Road Books this Saturday at 1 p.m.), says, "Ghost stories are a way to feel at home. I think that's why people like them because they're the back stories."

Here are a few of Charlotte's spookiest places:

Elizabeth is, by far, the most haunted neighborhood in Charlotte; even the main green space -- Independence Park -- is teeming with activity. An old female ghost haunts the Cajun Queen on Seventh Avenue, one of the area's oldest houses converted into a restaurant. Talking to some of the wait staff, I heard conflicting reports on the reason why she haunts it. A bar was built in the old owner's bedroom, and one waitress says she's hosted the old woman's relatives, who say the old maid, a proper Southern woman, is ticked off that such debauchery is occurring in her bedroom. Other Cajun Queen employees say the opposite, that the woman was a lush and haunts the bar because she wants to get crunk.

Another restaurant in Elizabeth hired an exorcist to rid its establishment of poltergeist. But just before telling CL the specific tales from beyond the grave, the proprietor had a sudden change of heart, fearing the publicity would drive away business.

Sandy Pawlowski, a former resident of an apartment complex called The Mayflower on Oakland Avenue, frequently saw a shadow ghost hanging out in the stairwell of the building. The apartment, built between 1915 and 1920, was ordered from a Sears catalogue, says Pawlowski. Like the description of the shadow ghost given in the main story, the dark spirit was wearing a top hat. When Pawloski saw it, she would walk past it and pretend it wasn't there. "I don't like to look at ghosts," she says of her aversion technique. On another occasion, Sandy saw a little girl ghost with a bluish hue walk through the wall.

Pawlowski wasn't the only one to see the shadow ghost; her neighbor at the Mayflower asked Sandy one day if she had ever seen a ghost with a funny little hat on.

Founders Hall, formerly a medical school, is said to be haunted by a girl whose corpse was sold there. Employees at McGlohan Theatre have reported hearing singing in the building that used to be a church.

At various times in the house's history, it has served as a dormitory for high-class single women visiting the city, a moonshine distillery and a wedding parlor. The Antique Kingdom, built in 1903, was the only place that Williams researched that she experienced paranormal activity firsthand. Williams was perusing the antiques on the second floor when she suddenly felt "closed-in" and short of breath. Then she felt something touch the back of her neck.