Hits a slam dunk with recipes in The Flavor Playbook 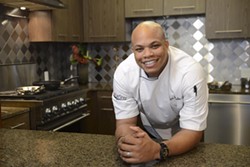 Chef Kev Winston was thrown into the culinary turf. He grew up with a family who worked at a Kansas City barbecue joint and he couldn't shake his love for food — he went on to enroll at Le Cordon Bleu in Pasadena, Calif.

Winston, who lived in Los Angeles prior to moving to Charlotte in 2012, has catered for celebrities including Justin Bieber, Chris Daughtry and Mindless Behavior and acted as personal chef for Brendan Haywood of the Cleveland Cavaliers, in addition to other folks in the NBA world.

His experience in meeting athletes' nutritional needs and a love of basketball and football helped him to pen The Flavor Playbook, released in September.

Recipes in the book vary, but include a take on grilled steak that's been praised by Carolina Panthers player Thomas Davis. Winston is also planning a series of pop-up dining experiences, which he's dubbing as "The Secret Table."

Creative Loafing: What can folks expect at The Secret Table?

Kev Winston: The Secret Table came about with a friend of mine in Los Angeles and we came up with the concept and it was very successful. We did a lot of Beverly Hills dinners in swanky mansions and places like that. We were able to bring foodies together in one room for a communal style dinner with live entertainment and a nice bartender. That's the concept of The Secret Table. It's about exposing people to a different dining experience.

In Charlotte, I want to add more live entertainment to it. So, we'll have live violinists and saxophone players, and a mixologist. Every month, we'll do it at a different location and it'll be seasonal and theme inspired. The first one will be Nov. 7 and it'll have more of a Thanksgiving-inspired theme and it'll be at a nice, cool location. The Secret Table idea is that you don't find out the location until the week of, so you buy your ticket and then you get that element of surprise. It's going to be pretty outside of the box.

In what ways did athletes, who are many of your clients, help to influence some of the things you penned in The Flavor Playbook?

Being that I was a wannabe college athlete at one time and tore my ACL and got discouraged. They play a huge part in why I called it The Flavor Playbook. I love the spin on creating this concept for the average man who doesn't necessarily know how to cook healthy and cook with flavors. I wanted to tie the two together. I also made it because I wanted to attract people who don't have a lot of time and to give them techniques with easy ways to make flavorful, healthy dishes. I wanted to bring everybody together to create healthy food that's quick, efficient, flavorful and most importantly, healthy.

You sell Beulah's Classic KC BBQ Sauce on your website. Can you tell me a little about this product?

That idea came from my grandmother, who created a cookbook and barbecue sauce years ago. For years, my father has been trying to get it into a bottle and was unsuccessful. I wanted to keep that family tradition going and allow my family to experience it for the rest of our lives. That's where the idea came in, and all I did was make some very small adjustments to make it my own. It's a very different barbecue sauce that a lot of people love.