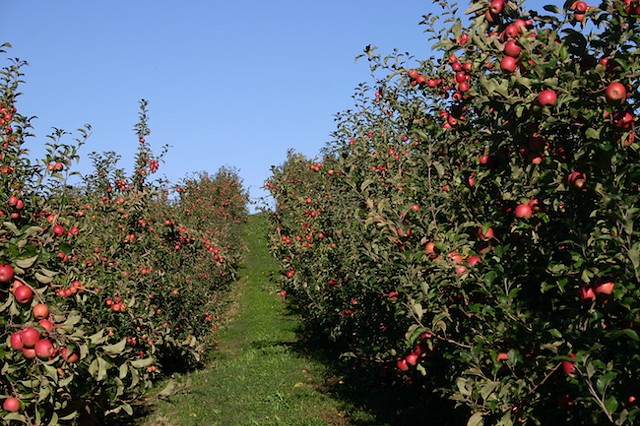 Perry Lowe Orchards is nestled in the Brushy Mountain region of North Carolina, a couple hours north of Charlotte.

Apple farming is a family business, as the legacy of caring for and harvesting an orchard goes back six generations.

The farm itself spans over a hundred acres in the foothills of North Carolina and the orchard grows about 30 different varieties of apples. Some are popular and are organic versions of what you'd find in every grocery store chain, while others are native to North Carolina.

In the spirit of cider and fall, Creative Loafing caught up with Perry Lowe and talked about the harvest conditions, family traditions and most importantly, apples.

Creative Loafing: What are some apple varieties that you grow that we don't normally see in stores?

Perry Lowe: We grow over 30 varieties. There's one that it's origin is in this county, and it's called the Brushy Mountain Limbertwig. Very late [harvest] apple, it is a small apple but its used in cider or hard cider — it's a very good apple for that. And it keeps all winter, almost without storage. That's one that you probably never hear about, it's not one of our more popular ones, but it one that we grow. 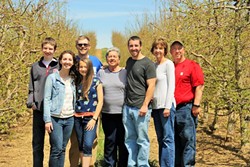 Some of the new varieties that you don't [see in stores] is an apple called the Suncrisp, that's a really good yellow apple that comes in usually about the first or second week of October. We also grow Crimson Crisp, which is a tart red apple. You won't see that in stores because more stores carrying just three or four varieties. We're also known in this area for having wonderful taste in Honeycrisp. You do see those in the stores, but I like to say that we're growing more and more just to try to meet the demands, because even though it's in the supermarket lot, it's just different when you buy it from a grower from our area because the taste is unique to our area.

How has the harvest been this year with the amount of rainfall and Hurricane Florence?

Well we had something that hadn't occurred to us in a long time — we had a devastating hail storm this year, July 21, and since July 21, we've had numerous and numerous rain [storms]. Florence wasn't the most rain that we had, but from just that, we had extremely cloudy weather.

So all this combined has made this a pretty difficult year. I always like to talk about the bright years, we've had very, very good years in the past. This is one that for most growers in the state has been a very complicated harvest from the rainfall.

Does Perry Lowe Orchards have any plans for pick-your-own apple programs or other apple-related family traditions?

One thing about our operation: we don't pick apples for chain stores. We grow apples and sell most of our crop at a roadside stand, so we try to uphold the family tradition here. Now, when you said we don't do pick-your-own, that is correct, but we do organized school tours. We've been doing that for 25 years, where schoolkids come out and tour the farm and pick a bag of apples and do a hayride. 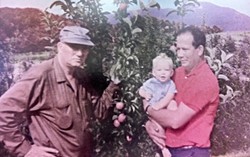 This is the first year that we planned to do a full pick-your-own, but unfortunately the weather just didn't create that circumstance for us. The hail storm and the rain, so I think there's a lot of pick-your-owns that have really struggled this year because of the weather. So I think when you talk about apple harvest, I didn't say this, but pick-your-owns have been very difficult to do. But what might've stopped us, was one storm that lasted 10 minutes that prevented us from doing pick-your-own 'cause it did tear up the block that we were going to use for pick-your-own, basically got wiped out from the hail storm. Mother Nature did dictate whether we could do pick-your-own [this year]. But we are starting a pick-your-own operation and that will be starting next year.