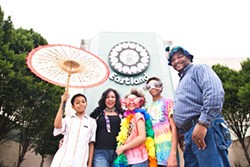 Depending on whom you talk to, the Eastway area is generally known for being one of two things: A) the safest bet on where to find the best tacos, pupusas and pho in town, or B) "the ghetto." The latter opinion seems to be at the nadir of its popularity, and those in love with the neighborhood aren't shy to speak up to defend it.

Here, CL talks to two influential East Charlotteans about gentrification, immigration and how east side artists are using their talents to shape their surroundings.

Donell Stines-Jones is the community outreach coordinator at UNC-Charlotte Center City Building. She is also a choreographer who moved to the Eastway area from Brooklyn, N.Y., 14 years ago to work for N.C. Dance Theatre.

Creative Loafing: As an artist, what do you make of the east side's burgeoning arts scene?

Donell Stines-Jones: Specifically as an artist on the east side, I've been completely honored to watch the whole artistic scene grow. It's definitely on the upswing, although a lot of the artists on the east side go out to Plaza Midwood and NoDa and other places. I wish there was a hub for artists here, and maybe there will be with the new influx of interest in Eastland Mall.

What do you think about the current proposals (a film studio, an amusement park) for the renovation of Eastland Mall?

There needs to be some sort of connection to the community for that area to thrive. The idea for this filming space is interesting because of the film school. My gut reaction was that the film industry component really has no connection to the community. In reality, it's cheap real estate for them and they're going to drive the people who live around there out of their price range. Eastland Mall has been vacant and barren for so long that you could put a Cheeto out there and people would think it was the greatest thing ever. I haven't seen real commitment in looking at the demographics of our community and thinking, how do we involve them?

How do you think Eastway fits into the rest of Charlotte?

You need to look at the big picture of how Charlotte functions, what's sexy for Charlotte and what's not, and the east side has not been sexy for the past 10 years. It's all by design and you have to figure out why. I'm not a political activist at all, I'm just an artist and this is my community. People say, "We can save the east side of town," but there's nothing wrong with the east side of town.

Rosalia Torres-Weiner is an artist and founder of Project Art Aid and the Papalote Project. Originally from Mexico, she has been living in Charlotte for 16 years.

Creative Loafing: Why did you begin the Papalote project?

Rosalia Torres-Weiner: I started the project last year but I wanted to start it a long time ago. The purpose is to help the children affected by the deportation of a parent use art to help cope with the negative emotions that [separation] causes. At first, it was really hard finding families willing to share their stories. The idea is to have kids attach their story to the kite and then let it go. Sometimes people think this is just happening in places where the media focuses, like Arizona, but it's happening right here in our city, too.

You've recently completed a mural in the area, right?

The mural [on Central Avenue, between Sharon and Eastway] is on a wall I wouldn't have chosen, because of its texture, but I took it because the whole purpose of my project is to make awareness. My goal is to paint the whole Central corridor with vibrant designs that can make anyone feel at home, especially my Latino people: I want my colors to serve as a blanket to cover them.

Do you think the arts are vital to uniting Eastway's community?

The artistic community on the east side is growing and changing; I know there are a lot of good artists and good people out there. I want to involve the community to help make this area ours, especially the kids. It's not easy to do public art, the city has many regulations, but it makes people happy and it's what makes a city grow. Art is a very strong tool to tell a story, say who we are and what we want. I am not a good writer but I can tell a good story with my art — it's my tool.