Trans Pride Turns Up in Charlotte

In last year's Pride Guide, we reported on conflicts among LGBTQ organizations regarding diversity and trans representation at Charlotte Pride. Members of the local Trans and Queer People of Color Collective, a subgroup of Charlotte Uprising, said they were being ignored — or at best tokenized — by Charlotte Pride organizers.

In the lead-up to this year's festivities, we checked in with Matt Comer, spokesperson for Charlotte Pride, who told us the organization's board undertook a strategic planning process earlier this year that made intersectional inclusion a priority in all efforts surrounding 2017 Pride.

"Those strategies will take time to implement," Comer wrote in a statement. "But we're extremely proud that many of our year-round programs have already begun to grow and become more inclusive, including Charlotte Latin Pride, our film festival Reel Out Charlotte, and the Pride festival and parade. In the meantime, we're ensuring that this year's festival and parade is among the most diverse we've ever seen, including entertainers who represent a variety of communities."

As told in this week's cover story, Charlotte Pride will feature local band Blame the Youth — made up of three queer people of color, including a trans Latinx man — on the main stage this year, which is a step forward from last year.

Ash Williams, a leader with TQPOCC who spoke out against a lack of trans representation on the main stage last year, said they are unaware of this year's efforts around diversity.

"I think people forgot largely about what happened last year," Williams says. "I haven't really heard of anyone having any trouble, but I'm also not in community with a lot of folks that I was in community with last year around this time. I feel like everything worked out, though." 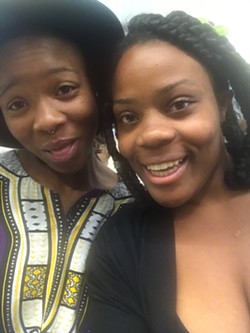 Folks like Williams aren't interested in attending Pride for a slew of reasons, including a heavy police presence and past problems such as the ones CL covered last year, but Williams believes it all "worked out" because they have been busy planning Charlotte's first Trans Pride, an event centered on trans people that will include multiple events held throughout the city between September 15-17.

In recent years, Trans Pride has been held in Greensboro, but Williams reached out to organizers there who were game for bringing it down to the Queen City. The weekend will kick off that Friday with a free screening of Kiki, a documentary that follows LGBTQ youth-of-color performing the ballroom dance style known widely as voguing on the Christopher Street Pier in New York City. That screening will be held at The Light Factory in Plaza Midwood at 7 p.m.

The following day will feature more of a convention atmosphere at UNC Charlotte Center City, where people and organizations will host workshops, sell goods and offer services for trans folks, including a free name-change clinic. In a separate Self-Care Tent, experts will offer reiki healing, palm and tarot readings, massages and mental-health consultations. That night, the party moves to South End for the #T4T Open Mic night at Three Spirits Brewery, Charlotte's only black-owned brewery.

The weekend will close out with a trans-exclusive pool party at a private residence in Ballantyne, on Sunday, Sept. 17.

In the few weeks left before Trans Pride, organizers are attempting to get more youth involved in leadership roles. They are offering $25 gift cards to youth under 20 who want to faciitate workshops on Saturday, and allowing them to bypass the application process by emailing transpridenc@gmail.com.

"We want young people to be involved. We just want them to come to Pride and we want to have shit there for them to do," Williams says. "What we're trying to do is just make it super accessible."