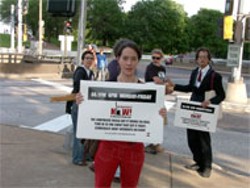 Like many communities, San Antonio, Texas, has a split personality, says Latina student activist DeAnne Cuellar. Although Hispanics account for 70 percent of the population, they show up time and again in local news not for their achievements or leadership but in stories portraying crime, drugs, and violence.

"We felt misrepresentation is erasing our history, making people forget we exist in society," Cuellar says.

Instead of shrugging it off, Cuellar and others organized the Texas Media Empowerment Project to give Hispanics and "communities of color" the voice she felt they lacked. Today the project monitors local news channels to increase awareness of unbalanced reporting, supports new perspectives and alternative media, nurtures minority leaders, and encourages the community to participate in the news and set media policy.

"It's all about building personal community alliances and networks to share information," says Cuellar of the organization, which was started on a shoestring. "If you don't have money or funding, what you do have is people, and that's unlimited."

As daily newspapers lose readers and consumption of other mainstream media continues to decline, independent media — often run by volunteers — is sprouting all over the United States. Activists say communities are taking the news into their own hands to combat a corporate media that often replaces in-depth reporting with entertainment, personalities and punditry.

"It's not that I'm uninterested in the world; it's the world as covered by this news outlet isn't interesting to me," says wireless expert Sascha Meinrath, who co-founded an open-source mesh network community wireless in Champaign-Urbana, IL, and will soon launch a low-power FM station. "Let's talk about stories that are not making it into our newspapers, are not on the radio and are ignored by the national press."

In communities as far-flung as Champaign-Urbana, Brattleboro, VT and Asheville, local advocates are bypassing corporate-owned media, using a variety of forms — not just alternative weeklies, but also Internet news sites that follow an "open publishing" format, wireless networks and low-power FM radio. Local activists say that media control is often necessary to ensure that community issues — from politics to zoning to the environment — are understood, addressed and debated.

"Computers, communication off the Internet, and the declining costs of digital production have transformed consumers into producers, listeners into speakers," says Dr. Mark Cooper, an expert on communication technology and policy at the Consumer Federation of America. "We are putting the 'mass' in the mass media for the first time in our history — that is a revolution that is just beginning."

It took Sascha Meinrath more than three years of lobbying to win a low-power FM station license for WRFU (104.5 FM). First he had to fight off objections from the National Association of Broadcasters that Urbana's 100-watt station would interfere with the signals of 100,000-watt commercial broadcasters.

"When they have you outgunned in Washington 100-1, it's hard to even get the ears of the policymakers who make these decisions," he says.

Unlike expensive radio conglomerates, low-power stations are often staffed by volunteers and are "incredibly cheap to build and to run," says Meinrath, costing about $2,000 per year.

Radio Free Brattleboro, in southern Vermont, took a different route to community broadcasting. The station started with a single watt — later increasing to 10 watts — on the unused FM frequency 107.9 for almost five years before FCC agents knocked on the station's door.

"In this case, we feel we are doing what we are obliged to do — that is, assert and exercise our rights to the airwaves," says RFB organizer Sara Longsmith. "Every community has the right to broadcast the voices of the community to itself."

Many activists say that what drove them to community media was a lack of information and insight on issues in their own back yards. Take Wally Bowen, whose Mountain Area Information Network, in Asheville, builds infrastructure such as low-power FM, free radio and community Internet that links to alternative print media.

"Our vision is to be able to take the independent progressive voices that will appear on public-access television and make them available online 24/7," says Bowen. "So if you have a group that does an independent program video on clean air or whatever the issue is, they don't just get that one appearance on public-access TV, but that voice continues to be online through video streaming."

"An unconscious people, an indoctrinated people, a people only fed partisan information and opinion that confirm their own bias, a people made morbidly obese in mind and spirit by the junk food of propaganda is less inclined to put up a fight, ask questions and be skeptical," Moyers observed. "Just as a democracy can die of too many lies, that kind of orthodoxy can kill us, too."