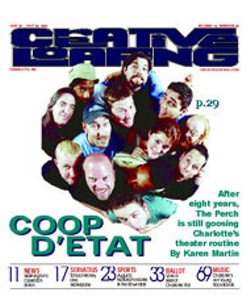 It's 8:15 on a Saturday night. Outside, trees dance frenetically in advance of an approaching storm. Upstairs inside the old brick building at the corner of Central and Pecan Avenues, however, things are relatively quiet. Here at The Perch, members of Charlotte's homegrown sketch comedy club are preparing for the second week of "audience favorite" sketches, in celebration of the troupe's eighth anniversary."It's not very exciting," says Shannan Brice, one of the troupe's founders, describing the backstage preparation. "It's more like a try-not-to-get-run-over kind of thing once it gets busy. Now, if this were a Friday on the first night of a show, we'd still be running around, memorizing lines."

In a small room that serves as a dressing room, costume shop and God knows what else, Sean Keenan and Brandon Higgins are photocopying the night's programs on a small copier that clacks and sputters with rheumatic abandon.

"It's from 1960s Russia," Keenan quips as he folds a program, the title of which reads: "Holy Crap, It's Our 8th Year Anniversary Extravaganza." The show features skits that have been most popular with audiences over the years.

The night before, all three shows (the nonsmoking 9pm show, 11pm and 1am) sold out The Perch's 60-seat performance space. On this night, the first two shows are reserved to capacity, and the 1am show is booked with reservations for 40.

Brice answers the phone and takes two more reservations for the late-night show, then goes about readying the club for guests. She makes a pot of coffee, sets up the video camera (every show is taped), sprays some air freshener, then pulls the curtains shut on the windows.

The stage is set up near the entrance from the lobby, so that performers can easily hop "backstage" to get ready for the next sketch. You have to walk around it to get to the rows and rows of mismatched sofas and chairs, some of which are Salvation Army specials. Others have been donated.

Hardwood floors are covered, here and there, with stained carpet remnants. Exposed ductwork hangs just below the 12-foot ceiling. The exposed brick walls are covered in artwork that could best be described as movie-set-meets-attic-sale. Along one wall is a raised platform for the house band, Dawn Patrol.

The first customers enter as soon as the doors open at 8:30. They're sopping wet from standing in the rain, but they're smiling.

The Perch has been "cheerfully offending" Charlotteans since 1994, and its origins go back farther, when its nest was feathered in Los Angeles in 1990. Brice and her best friend Blaine Miller, who met while studying theater at the University of New Mexico in Albuquerque, moved to LA after graduation. Brice had been offered a job as a prop mistress on one film, then another.

Wanting to do "something funny," they found a 60-seat theater off Santa Monica Boulevard that was hosting a series of one-act plays. They charmed their way into the theater and began producing their own late-night material once the other actors left the stage.

"It was great fun," Brice recalls. Months later, however, she became pregnant -- and realized she didn't want to raise a child amid California's infamous earthquakes and race riots. A friend suggested she try to get a prop job with a movie of the week that was being filmed in Charlotte, then perhaps try to make her way toward Wilmington's movie scene.

They placed an audition notice for actors, jugglers and musicians, then gathered the performers at their house for rehearsals. Miller found the performance space at 1500 Central Avenue, which had been abandoned two years earlier by a telemarketing firm. The owner said they could rent the space for "next to nothing," as long as they did all the upfit themselves, pulling up carpets, painting the ceiling, and so forth. Brice remembers spending Mother's Day of 1994 sanding the hardwood floors at the theater while the troupe was at the house deciding which sketches to perform first.

The troupe played its first show a month later, calling itself "The Dead Parrots Society" -- until one member recalled that the name was owned by the slightly more famous Monty Python's Flying Circus troupe. (Someone might want to inform the London-based psychedelic folk/rock band of the same name -- but I digress.)

They needed a legit name. Someone suggested the "Legally Dead Parrots," and that stuck -- for awhile. Now, Brice says, they're called just "The Perch."