Where Are They Now?

Voices from the days when the Observer had something to say 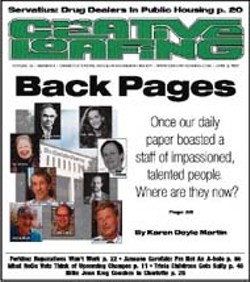 It wasn't always easy to track down some of these people: once when we called the Charlotte Observer newsroom to ask a writer's whereabouts, we got this response: "Who? She's not on our list." That's not surprising, said a few of our profilees; departed Observer writers and editors often are treated like Tony Soprano's disowned mother. "She's dead to me," Tony used to say, ending all conversation about the family matriarch.

Lucky for us, these former Observerites are very much alive, contributing their talents and experiences. Here's where they are now:

New York Times best-selling author Jerry Bledsoe recently has begun an author's tour to promote his 17th book, Death by Journalism: One Teacher's Fateful Encounter with Political Correctness, a scathing true-life account of a man whose death may have been hastened by unfair media reporting. From 1977 to 1981, Bledsoe wrote folksy columns for the Observer about regular people, finding the unique and fascinating in each of their ordinary lives. He remembers his early days at the paper as great times.

"A lot of good people were there, a lot of good writers," Bledsoe says. "Not only could they write, they were what great journalists should be: sensitive people who cared about the truth, and about getting things right."

Within a few years, however, the newspaper industry became more "corporate," Bledsoe says, with increased emphasis on management and consultants. "With that 'team concept' mentality, everybody has to be a team player, everything gets done by committee. . .That's OK for making widgets, but not for writing. I can tell you, there's no writing that ever gets done by committee."

Bledsoe left, just six months short of being vested in the company retirement plan. "You get to the point where you can't take it anymore," he explains. "I loved the newspaper business early on, and was grateful to be a part of it. I think I loved it too much -- it's a mistake to love an institution, because it never loves you back."

Now living in Asheboro, Bledsoe has written one novel and 16 nonfiction books, specializing in true crime. His Bitter Blood became a Number 1 bestseller, made into two television movies.

Charlotte private investigator Allen Cowan was an Observer investigative reporter from 1974 to 1983, starting the investigation that would "tell all the world that (defrocked PTL leader) Jim Bakker was a crook," says Cowan. When Cowan came to Charlotte from the renowned independent St. Petersburg Times, he says, he was "stunned at the quality of journalists" at The Charlotte Observer. "The photo staff, the editing, the enthusiasm and dedication to quality writing and reporting -- it was amazing."

Slowly, however, the newspaper became "more interested in the corporate bottom dollar." In-depth investigative stories, such as those he wrote about the federal investigation into the Outlaws motorcycle gang, became less of a priority, he says, and he felt he needed to leave: "I was an investigative reporter at a paper committed to not doing any investigative reporting. . .I became dead wood as far as the Charlotte Observer was concerned."

In fact, when the newspaper won its second Pulitzer Prize in 1989 for its coverage of PTL -- and then published a special section about it -- Cowan wasn't even mentioned.

"My name doesn't appear once," he says, with more than a trace of bitterness. "That's revisionist history of the worst kind."

Since leaving the paper, Cowan has worked as a civilian reporter for the Stars and Stripes, winning a National Association of Realtors journalism award for a story about American companies selling worthless swampland to military families. Today he continues his investigative streak by investigating people and cases for Charlotte attorneys, assisting them in trial preparation.

After starting as an investigative reporter with the Observer from 1972 to 1975, Ethridge stayed with the newspaper until 1988 as a projects editor and managing editor. During that time, he recalls, "our mandate was to do tough, good investigative reporting. . .so that every day, every week, [readers] were surprised and delighted to learn something (in the newspaper) that they wouldn't find anywhere else." He says he's most proud of being on the teams that won the paper's two Pulitzers, one on the Bakkers, the other on the investigation into the prevalence of brown lung disease in Carolinas textile workers. He also worked on the team that explored "Our Tobacco Dilemma": the moral conflict of the state's workers whose livelihood depended on a product that, when used as intended, could kill.

He remembers sending writers Frye Gaillard and Dot Jackson on an assignment to document the Catawba River -- to find the source, and follow it till it reached the sea. "Take as long as it takes," he told them; their stories eventually were produced in a special 32-page section, then bound into a hardback coffeetable book. "Can you imagine," he asks rhetorically, "the kind of reportorial and photographic resources that were involved?"