David Butler was born and raised in Charlotte, but it took him going away to notice the change that was occuring in the culture here.

While attending Winston-Salem State University from 2009 to 2013, Butler started to sense a change in his hometown from afar. 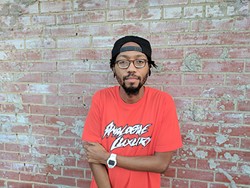 When Butler came home, he dove headfirst into the culture, mixing his passion for hip-hop and photography to launch DavehasWingz, a blog highlighting local rappers and shows. In 2014, he released a book of his photography work, but soon began contemplating how he could better monetize his work.

Earlier this year, Butler launched Analogue Luxury, a brand based on non-digital photography - Polaroids and disposable film - used to create home decor, as opposed to the tees and hats he sold through the DavehasWingz brand.

Butler recently brought on renowned Charlotte photographer Alvin C. Jacobs to help curate a physical space, for which he is currently hosting a crowdfunding campaign.

We sat with Butler outside of Smelly Cat Coffeehouse in NoDa on a recent afternoon to discuss why DavehasWingz had to give way to a more profitable model aimed at grown folks.

Creative Loafing: How did you get into photography?

David Butler: It goes all the way back to middle school, and even further back than that. We always had Polaroids and stuff around the house. My mom bought me my first digital point-and-shoot camera in middle school. In high school, I was going on these HBCU tours and I would document the trips with this point-and-shoot, and we were making little videos and all types of stuff. That's kind of where it all started and I didn't even realize that at that point I was planting seeds for what would be a future in artistic innovation.

How did the idea come about for Analogue Luxury?

It goes back to my 2014 book release, because I documented that whole book release on instant film; it was a Fuji Film Instax camera, it wasn't like a traditional Polaroid like I'm shooting now. I had bought a 100 pack and took pictures of everything that was going on at the show, as people were interacting with the book, etc. So I had those images in a plastic bag and I was looking at it one day and I was like, "This should be my next book." So those seeds go back to 2014-15.

But instead of a book, you created a new brand. How did that develop?

I was like, "I need to stay creative, and I still love photography, but I'm not trying to do it in a way that requires me to edit photos or anything like that. I want it to just be natural, quick, instinctual." And the idea of doing that Polaroid book, it just came back to me. I added on disposable film as well, just because it's a little more of a throw-away medium. So the brand itself is based in disposable film and Polaroid film.

So I'm just living life, going to shows, still supporting the scene, doing different things, taking photos, documenting all these experiences, and then allowing those photos to either be translated into fine art that physically goes on people's walls, or to inspire collections and garments. Everything is going to be based on the photos. I'm looking at the photos, I'm living with them, and they're either going to be to the quality where I can let that hang on somebody's wall, or just a thought process where it's going to inspire some type of garment or some type of fixture to go in somebody's house, from a coffee mug to a pillow or whatever.

So a picture on the wall or a coffee mug is straightforward, but the more you get into home decor, like a pillow, how do you pull that off without it becoming corny?

There might be an actual photo that's turned into a t-shirt or into a coffee mug, but I wouldn't necessarily do that for a pillow. I would include some design elements, because the context has to match. If you put it on a pillow, it's probably not going to have the same impact, so I'm paying attention to those design sensibilities and thinking about it from much more of a home décor aspect. If I'm going to do some bedding or some curtains or a floor mat, I wouldn't just throw a photo on it and be done.

But why the focus on home decor? It's not something you see many folks your age interested in.

I come from the world and the mindset and attitude of streetwear. It's one of the things that I love. But homies are just getting a lot older, so not everybody is going to continue to wear what we're wearing now; everybody's growing and evolving. People are getting houses, they're opening up studios, they're running businesses, and all this kind of stuff.

So how can I take that same streetwear mindset and mentality that's normally put into clothing, and put it into goods that are going to keep people intrigued and inspired in their spaces and make them want to work hard, keep working on their craft, keep doing dope shit? It's taking on that mindset and being able to put it into some home décor items that are going to bring value to their space.

It's definitely the tangible nature of it. I enjoy going to my grandmothers' houses and digging into crates of photos. Especially since my father passed away when I was young, I literally have photos of him and I from my first birthday.

I really want my kids and grandkids to have that same experience. Like, "Oh word, you guys were going to hip-hop shows. You guys were on Venice Beach." I don't want to be like, "Check out your birth on this file, I uploaded it for the world to see." [laughs] That's where the intrinsic inspiration is to stick with the older mediums, it's the tangible nature of it, being able to have something physical.

Since returning to Charlotte, you've been active in the scene, participating in events like Carey King's Photowalks and Dammit Wesley's Let's Talk Dammit. What's it been like for you to help build that momentum that you sensed building from afar while at college?

It's exciting just because it shows that people are engaged and intrigued and it gives us proof that there's an audience. So you can really never say, "Well, there's not really an audience for that." It's like, "Bullshit. I was just in a room with X number of people, I live this, I go to shows, I'm in the conversation where people are saying, 'I want to see X,Y and Z and those things aren't being provided.'" So it kind of gives you more of a leg to stand on, it gives us more confidence as a scene.

What I'm more interested in is trying to take what we're getting from those conversations and trying to translate that into something tangible so we're actually fulfilling the needs of what the creative community is asking for. So with the campaign for Analogue Luxury, that's part of the goal is to be able to give people the same type of resources, mindsets and thought processes that I use to created the brand, so that they can apply it to whatever that thing is and start to think about their creativity and their art from a business perspective, from an entrepreneurial perspective and from a career perspective, so that we're growing more creative players and more people who can actually have an impact. Because Charlotte's growing fast as hell, and nobody's going to stop it, so you have to find a way to manipulate that commerce that's coming through the city into a way that's going to be an advantage for you. And as a creative, the world is your oyster when you look at it in that lens.

What would you like to see being done in this city, whether within the scene itself or from folks on the outside who could support?

The momentum is there, it's just about getting more people to push and getting one on accord. I'd like to see more creatives empowered in thinking about their stuff from a business and career perspective and not so much of a hobbyist perspective.

On the infrastructure side, I would like to see places like the Knight Foundation and Arts & Science Council and whoever else, Foundation for the Carolinas, whoever it is, I would like to see them be a little bit more proactive in providing opportunities, and also see them think about the ideas that they're getting and receiving in a different context instead of funding the same types of ideas over and over and over again, or ideas that come from the same type of people over and over and over again. It's kind of like building a plane and training the pilot at the same time. You want to have these resources available to people, but you also want them to be able to have that mindset to be able to use the plane properly when it's built.