Dumb and Dumber To: I'm With Stupid | Reviews | Creative Loafing Charlotte
Switch to the mobile version of this page.

Dumb and Dumber To: I'm With Stupid 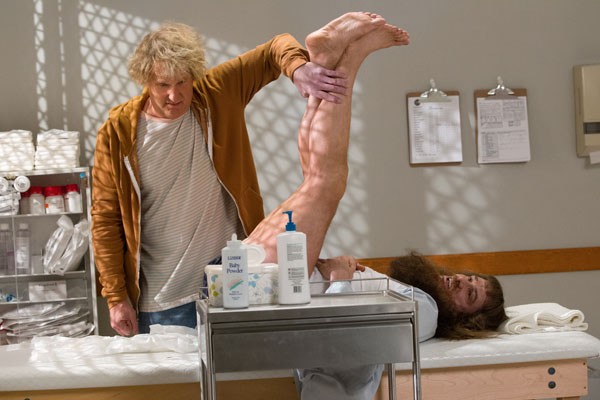 It's amusing to glance over the early reviews stating that Dumb and Dumber To is no comedy gem like its 1994 predecessor. Reading over those words, one might get the impression that the original Dumb & Dumber compares favorably to cinematic masterpieces from the likes of Charlie Chaplin, Woody Allen or the Marx Brothers. Um, no. Instead, it was just one more slapdash flick released in an era in which dum-dum comedies were all the inexplicable rage, appearing the same year as star Jim Carrey's first Ace Ventura outing, a year before Adam Sandler's Billy Madison and two years before Tom Arnold's The Stupids (and believe me, there's plenty more where these came from). It was the first effort from sibling filmmakers Bobby and Peter Farrelly, who would subsequently make a pair of films so hilarious and genuinely clever (Kingpin and There's Something About Mary) that they made D&D look even more imbecilic by comparison.

Certainly, Dumb & Dumber has its fans, and they've been eagerly waiting 20 years for this sequel. But they're mistaken if they think this movie was produced for them. When it takes two decades for a sequel to appear on the scene, it only means that those involved have been experiencing career free-falls and are hoping for an easy payday to revive their flagging fortunes. That's the case with the principals here: Carrey, whose days of instant $100 million grossers are long gone, co-star Jeff Daniels, whose hit-and-miss screen career has been on hold since he found success on TV's The Newsroom, and the Farrellys, who haven't had a sizable hit since George W. Bush was first learning how to wander around the White House without getting hopelessly lost.

Dumb and Dumber To begins with a bit involving a stubborn catheter, and it's one of the film's few gross-out gags that actually works, thinks to an amusing buildup and some deft physical shtick on Carrey's part. There's also a hilarious — and clean! Imagine that! — joke involving an addressed envelope, annnnnd ... well, those two instances pretty much tap out the comic inspiration on view. The rest is a feeble reworking of the first film's story, with champion morons Harry (Daniels) and Lloyd (Carrey) again hitting the road to deliver a package, and again running afoul of some nasty people who want them dead. Along the way, there are gags involving Lloyd's fingers up a septuagenarian's dusty, cobwebbed hoohah, a dog licking peanut butter off teenage Harry's penis, Lloyd stuffing his adult diaper with other people's poop — in short, the sorts of skits once routinely seen on Ed Sullivan's weekly prime-time TV show.

Carrey doesn't seem to have missed a beat in nailing Lloyd's nuttiness, while Rachel Melvin, best known for (depending on one's preference in entertainment) her work on the TV soap opera Days of Our Lives or her co-starring role in this year's Zombeavers, is a bright presence as Penny, a nitwit who might be Harry's daughter. Daniels, though, doesn't seem to be playing the same character he essayed 20 years ago, meaning he's either forgotten how to tackle the part or he couldn't be bothered to do much more than draw air in exchange for a paycheck. And then there's the tragic case of Kathleen Turner, cast as the boys' old flame Fraida Felcher. In another lifetime, she was a terrific, alluring actress known for hits like Romancing the Stone, Prizzi's Honor and (as the voice of Jessica Rabbit) Who Framed Roger Rabbit. Here, she turns up only to be subjected to fat jokes and play it straight next to our heroes. Then again, maybe she's just come full circle. In her exciting debut in 1981's Body Heat, she delivered one of cinema's great lines, murmuring to William Hurt, "You aren't too smart, are you? I like that in a man." And now she's with two men who aren't too smart — she must be loving that.