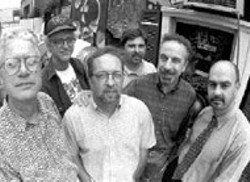 The centerpiece of Charlotte's best loved circus -- the third Friday gallery crawl in Noda -- is pulling up stakes before the bulldozers roll in.

This little stretch of suds and self expression -- Pat's Time for One More Pub, 23 Studio and Wrightnow Gallery -- has fallen victim to the success they courted for 10 years. Pat has sold to a development company who will soon tear out the beer-soaked floorboards and push over the brick walls for office, retail and condos. One of these buildings house the final show of the Eclipse Group, a loose confederation of like minded painters who are the heartbeat of NoDa. Will a pulse be audible with their loss?

I met these artists on a Tuesday afternoon at Wrightnow Gallery on North Davidson Street. Randy Crawford, C. Frank Hass, Jerry Lee Kirk, Rusk Masterson, Lepton Neutrino and Raed Al-Rawi -- the Eclipse Art Group -- are showing together in Decade, in the gallery's final show. Collectively, these guys helped build what has become Charlotte's premier monthly art event -- The Noda Gallery Crawl. I didn't interview them as much as eavesdrop on a chance meeting of old friends gathered to trade stories connected to the ascent of their neighborhood.

In the early 90s, these artists, and others, came together to carve out gallery space in a low rent district. They leased the building, built the walls, hung the signs and turned on the lights. They started a neighborhood watch with flashlights, t-shirts and hope. They rented a shuttle van to pick up the art crawlers from uptown to bring them where the crawlers dared not drive ("Is it safe?"). They christened the neighborhood NoDa, the title Eclipse Group once had for themselves. The process was difficult, challenging, sometimes a little messy. These artists obviously reveled in it. They are, after all, the messy stuff art is made of. Maybe you won't make art out of the messy stuff, but you can't make art without it.

The Eclipse group share similar visions of what it means to be an artist. Their visions don't jibe well with the Art Establishment, that mythic bureaucracy of museums, galleries, universities and periodicals which are the presumed fount of visual art in American culture. Without the blessing of Establishment gatekeepers, artists stand little chance of getting their work shown. The Eclipse art group didn't wait for a blessing.

Here's a last look at the group collectively. This is farewell and thanks. Farewell to these sticks and bricks -- Pat's, 23 Studio and Wrightnow, base camp to this loose confederacy of artists. And thanks to the artists, and to their devoted and rollicking minions who will continue to dance, creep and occasionally crawl these streets searching the next eclipse.

This show, Decade, illustrates why these guys might have a tough time fitting into mainstream galleries. The work is tough to market, and, as loose cannon member Leptron Neutrino puts it, "We're not a resume driven gallery." These artists don't fit into easy niches; they're changeable, unwilling to stick to a single style, hard to box and sell. Each borrows from the others (how could they not), and none resembles the others. The six are incontestably individuals. Fused together, they're a gang without the hubris and strut. A likable gang.

For a group with no leader, Jerry Kirk is the leader. He leads by dint of his talkativeness and his ability to put to words what others express in eye contact, winces, nods, laughs and derisive hoots. Though all these guys express themselves well, Kirk is most fluent in media-speak; he appears to be the mouthpiece for the mind set.

Kirk's work is comical, self-conscious, character laden and opinionated. He chronicles the world around him, sometimes exposing the laughing heart behind the pock marked face. In "Sunset on NoDa," we see the street element, his street element -- gallery owners and art crawlers, artists, shop owners, street people, urban clowns. The painting is fronted by portraits of the Eclipse boys and surrounded by local luminaries from the neighborhood. Davidson Street is a blue river, swirling upward and away from the crowd toward the glimmering uptown towers. A winged monkey in shirt and tie flies overhead, carrying a briefcase spitting dollar bills. The NoDa denizens ignore the monkey, smiling the stoic and foolish smile that says, "I can't be bought." The painting is Kirk's swan song for his clan of perennial ugly ducklings -- a goodbye and hello from the band of irascible and irrepressible changeling artists.

Randy Crawford is a collector. He finds things that others have discarded -- postcards, price stickers, plastic toys, hubcaps. He takes these tossed aside remnants and recycles them in the gallery. He combines and modifies the objects, but ordinarily breathes new life and meaning to the objects by simply transferring them from sidewalk to gallery wall. He infused political opinion into his piece "Rev. Brock, did you read the book before you burned it?," a photo collage and painting depicting the minister torching books and offering his wisdom on the Harry Potter collection: "These books teach children how they can get into witchcraft and become a witch, wizard or warlock." Crawford has a taste for the absurd.

Rusk Masterton is likely the most marketable painter on these walls -- his work is quietly emotive, design driven and, for the most part, the least vexing. Not vexing, except for his piece "09 11 01," a visual take on the WTC event. The painting is a heart surgeon telling his wife how his day went after a heart exploded on him. It's disaster made perversely eloquent, oblivion carefully, impossibly, explained. Except for silence, tears and Barbara Kingsolver's remark "We don't own the world, as it turns out," Masterton's painting is the only 9/11 reactive expression I've received that doesn't put my teeth on edge.

Frank Hass' work is both strident and ebullient and he is the gooiest painter of the group. His paintings float somewhere between stain glass and unchecked body fluids. Everything is carefully delineated but uncontained; images packed with raw pigments wrestle one another for dominance. He's an expressionist painter -- Willem de Kooning frenzy and a large smear of Hans Hofmann joie de vivre. The vibrant frenzy approaches harmony in most of his work. "Dream Flight," his best painting in this show, seems hell bent on escaping the tiresome confines of the picture frame, the wall and the gallery. It's caged and singing. Cut him loose.

Lepton Neutrino documents his beloved NoDa in "Cut and Run," a montage tapestry of familiar faces drawn from this vibrant fringe community on North Davidson Street. Color Xerox photographs are pinned over an acrylic-on-plywood painting. Local faces litter the surface. Faces and feet and thighs, biceps, shoes and tattoos. The shots are the festive human face of his community -- the raw, the dim and the glowing -- and everyone is smiling. In front of his painting, scissors hang from a string, inviting patrons to snip off mementos; some have taken him up on the suggestion. Faces disappearing from NoDa.

Raed Al-Rawi's work is self-consciously lovely, spiritually based and barely of this world . He's from the William Blake School of Fleshy Transcendence. The paintings are color saturated amorphous bodies, reveling, undulating and dancing. Some sprout wings threatening flight. Cynics need to check sneers at the door. These paintings are the ones I want my kids to see before they face the expected tedium of chores or homework. Al-Rawi's paintings ask us to consider wonder in our world, something beyond the world that merely requires our services. Some of us kids need reminding.

What will die with the demise of these galleries? Perhaps only this: There will no longer be a gallery where an artist can pony up five bucks per linear foot for wall space to publicly show his stuff. No vanity wall, no hall of fame or shame. No naked square footage where anyone foolish or brave enough to call himself an artist can show his work to the critical and loving and jeering eyes of the unwashed masses. No great loss? Naw. Nothing a few new condos can't replace.

These artists are here today and here tomorrow. The buildings will crumble, not these guys. No one's skipping town. Jerry Kirk will soon have a studio and gallery space 200 yards up Davidson Street. He expects Eclipse members will show there. Al-Rawi is currently a resident at the Tryon Center; he's got a studio there. Crawford, Haas, Masterton and Neutrino all continue working and showing work in other venues in and around Charlotte, and points north of Davidson Street, notably the Ward-Nasse Gallery in NYC.

Last chance gallery crawl including Eclipse is Friday, May 17. Don't be left in the dark. *