Women of Vision exhibit will transport you beyond your own skin

These bold women capture the world

Funny thing, art museums: They can take you places you never knew you wanted to go.

Go see Women of Vision: National Geographic Photographers on Assignment at the Mint Museum Uptown. Give yourself a wacky reason to go, instead of a good reason not to. Consider yourself invading enemy territory, if that's what it takes to get you to climb those stone steps to the front door and plunk down your hard-earned $10. You're a spy — seeing how that other 99 percent lives — in Mumbai and New Guinea and Zambia and Bhutan and Baghdad.

They live better, and worse, and just as good and just as bad as you do. It's you in these photos, if you stepped out of your little bubble inside our bigger bubble that is Charlotte, and landed in Botswana or the Arctic, or Haiti, or Northern Afghanistan. If you crawled inside the skin of a reindeer herder, or inside a man dying of monkeypox, or a 10-year-old bride trapped in the rock and dust and deprivation of northern Iraq. If you crawled inside the spotted coat of a leopard and crouched behind palm fronds waiting for an elk calf to wander away from Momma, waiting for the pounce and the joy of the chase.

Here is the wide view of the terror and joy, part and parcel of being human on Earth. Or being animal, plodding in the dusty savannah, searching for that reason to plod on. Here is the long night and the short redemptive stab of light and laughter making that next night tolerable. Here is suffering with reasons for suffering: hunger, poverty, war, subjugation, fear. And here are spates of joy and celebration for very little reason at all.

When I heard the Mint was bringing National Geographic's photography show Women of Vision to town, I was expecting photos of Southern tea parties, Afghani knitting circles and Ukraine fashion shows. I was happily disappointed.

I am re-titling this exhibition Photographers of Vision. There are no X chromosomes watermarked on these photographs. They are neither manly nor feminized. Image to image, they are both and neither. As a whole, they are splendid.

These photographs will transport you beyond your own skin, and wrap you in the skin, and within the hearts, and behind the eyes of The Other. Them. The Not Me. All the photographs cast a hard, clear, honest eye on the people, animals and places they target. These photos often cite subjects we reflexively turn a blind eye toward. It's hard to turn away here; the work is too beautiful, too brutal, too genuine.

STEPHANIE SINCLAIR opens a window on the world of child marriage in her series "Child Brides — 2007-2010." A girl waves a red shawl over her head and smiles, untethered, as she looks to the sky. Her unposed celebration fronts a background of stone and concrete and desert rock. The girl is 10 years old, her little sister, maybe 3, stands beside her, staring into the camera. The text tells the story: The older girl is Nujood Ali, who gained freedom in 2008 by obtaining a divorce in Yemen. She bucked the tradition of the child bride and sowed hope into the hearts of any Yemeni girl not smitten with the idea of cancelling her childhood in the arms of an old man.

Pain, loss and misery, a universal backbeat for human existence, is a theme running through much of this show. Many photographs here are signposts of empathy, invitations to pay attention and commiserate.

Lynn Johnson has gone out of her way to record riveting images of a hurting world. Two photos from her series "Lethal Contact — 2006" illustrate the suffering one infectious disease can wreak.

A monkey's arm and a Gambian rat are held above a girl's head. Her stare into the camera is direct, clear and unmoved, as if she is trying hard to stay still for the camera. The "bush meat" is held by out-of-the-picture-frame arms, trophy kills dangling from daintily pinched fingers. Monkeys, rodents and squirrels, all common dietary fare in parts of Africa, can carry the monkeypox virus.

In the second photo, Norbert Lohalo-Nkoy, a monkeypox sufferer, leans back in a wood and cloth chair. His eyes are as unflinching as the little girl's, but half shut and watery, making him appear pain-wracked and frightened. His face and upper body are covered with white pustules, his half-opened mouth twisted asymmetrical by the rash. Complications from the disease later took his life.

Like Johnson, Lynsey Addario goes to dark places and brings back signs of light. Three of her photographs from three different series attest to signs of resilience, recovery and sustenance.

In "Strong Women — 2009–2010," girls in Kabul train as boxers in a brightly lit gym pulsing with raspberry and blue mats and pink walls. They look to the future, to the Olympics. In "Baghdad Calm 2010-2011," a chaotic wedding party, also in Kabul, signals a return to normalcy after years of violence. In "Water for India — 2008," a man-made waterfall cascades from the back of an unseen tanker truck into a stone hole. The mere, life-sustaining offering lures villagers who stand around on the parched ground to watch the spill.

ACCORDING TO the exhibit catalog, Jodi Cobb "always wanted to take photographs that ... were powerful and could change lives and opinions and attitudes." Her photographs comport with her ambitions.

Her series "In the Eye of the Beholder — 1997-1998" explores the mercurial, sometimes bizarre, ways the concept of beauty has developed in different cultures. A 2-year-old girl wearing a disposable diaper stands in a Georgia living room, her head posed coquettish and clumsy to one side, big hair swept up and around her tiny face. Cartoons play on the TV behind her; she looks like she's been interrupted, called out for the photo. She neither smiles nor frowns. Her show-girl makeup fails to conceal her expression of confusion and compliance: "Who made me this person?" and "Am I doing this right?"

In one photograph in Cobb's series "Slaves Among Us — 2002," two prostitutes lean out of a darkened doorway on a street in Mumbai. They peer in opposite directions down the road, bodies tightly clad in revealing wraps, faces hidden in shadow. Known as cage girls, often sex slaves, the women look innocent, framed under a bent tin roof, within the worn doorjamb and silhouetted by the blackness of the unlit room behind. Like Easter lilies floating on a septic field.

Another photographer, Beverly Joubert, is an advocate for, and protector of, endangered species in Botswana, her home for 30 years. She strives to become invisible in the field, capturing and hopefully helping save dwindling African wildlife with her silent lens. In her series "Life Among the Leopards — 2004-2005," Joubert continues her chosen role to "use her photographs as a tool to stir emotions," she says in the accompanying exhibit text, "so that individuals take responsibility for endangered wildlife." Ninety percent of African leopards are gone. 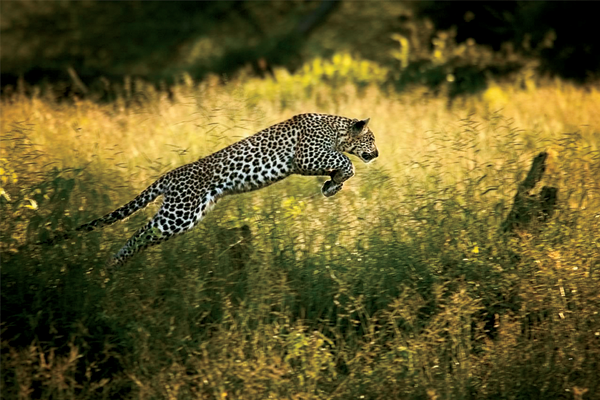 A yellow leopard's heavy-lidded eye peers patiently through diagonal fronds, waiting on prey. A 2-week-old cub cuddles with a vigilant mother. At 6 months, the cub hangs on a tree limb with Mom; later, she plays hunting games, again with Mom. We're allowed into the domestic life of this wild little family, up close and personal.

Come to the Mint for an hour. No tea parties, knitting circles or etiquette lessons here. Take a ride through the riveting, horrific, beautiful, bizarre, desperate world of Life on Earth 2014. Take a joyride through the incandescent shitstorm. Escape is just an elevator ride down the sidewalk.