Eight must-see acts for God Save the Queen City

Three-day event has plenty of music for the masses

Now in its fifth year, God Save the Queen City never fails to impress with stellar lineups featuring national and regional acts paired with some of the finest local musicians Charlotte has to offer. This year, the event has gone even bigger, taking place over the course of three days at four different venues.

Sure, we could have written up a simple, "You should go because every band is great" message, but spotlighting two bands from each venue seemed like a better idea. This doesn't necessarily mean that we like Temperance League more than Pullman Strike, or that you should see Amigo instead of Ravenna Colt or that you'd like Ancient Cities more than Junior Astronomers. We just don't have the space to write about all of them, though they are all worth a listen — that's one of the great features of God Save the Queen City. The people that handle booking always supply a variety of talented acts that cross a wide range of genres so that far more people will leave happy.

So, here are quick tidbits about some of the great music you can catch this weekend:

Water Liars — This Mississippi rock trio released its self-titled third album last year, the followup to 2012's Phantom Limb and 2013's Wyoming. Finger-picked electric guitar supplements the lyrics of Justin Kinkel-Schuster while drummer Andrew Bryant and bassist GR Robinson fill in the gaps — all done through a Southern-infused lens in a laid-back, easy-going style. They're not afraid of harmonies, or of gently letting feedback ring when needed.

Amigo — A fine specimen of Charlotte's rock scene, Amigo merges a happy-go-lucky attitude with solid musicianship and relatable lyrical content. Comprised of guitarist Slade Baird, drummer Adam Phillips and bassist Thomas Alverson, the band's debut album, Might Could, is one of the area's finest released in recent years (we said one of — the area's overflowing with great music as proven by this festival). The band's song, "Love's Made a Fool Out of Me," will be featured on an upcoming episode of Z Nation on the SyFy Channel.

Diarrhea Planet — This Tennessee six-piece is known for its three-headed guitar attack. The rock band — with probably one of the worst names we've heard in a while — makes you quickly forget any hesitations you might have based on the name alone though. Sure, the guitar playing can get a little over the top at times, but the guys know when to rein it in and let the metal rain down upon the crowd, winning them over quickly with its pop sensibilities.

Ancient Cities — What started out as a duo between Stephen Warwick (Secondhand Stories) and bassist Justin Fedor (The New Familiars) has developed into a full band with the addition of drummer James Dulin and keyboardist Matt Branniff. Warwick's lyrics take a front seat without diminishing anything the Charlotte band is doing behind him — Fedor's harmonies and driving bass move the songs forward while the group as a whole finds time to let go and explore every song's borders for a dynamic performance that's always developing and improving.

Temperance League — This local outfit transcends the blue-collar garage-rock path set out by folks like Bruce Springsteen. The sextet — guitarist Shawn Lynch, bassist Eric Scott, singer Bruce Hazel, guitarist Chad Wilson, drummer David Kim and keyboardist Jay Garrigan — is a supergroup of sorts of some of the area's hardest-working musicians. The band wears their hearts on their sleeves on stage, letting it all go, without getting sloppy in the process. They've spent time recently working on their next album, so this could be a great chance to get a first listen to some new tunes, as well.

Black Market — Punk influence meets garage aesthetics with cascades of melody masked underneath. The Charlotte quartet — drummer Evan Plante, guitarist Nate Proczak, singer/guitarist Jesse Reaves and bassist David Ulloa — started in 2012 with much broader expectations, but have refined their sound a bit since then. With bandmembers from Light the Fuse and Run, Forcefedglass, Little Bull Lee and The Spiveys, Black Market's experience comes through quickly while forging a path of its own. Prolific songwriters, Black Market seems to put out new material everytime you turn around — that's not a bad thing when it's released by this quartet. 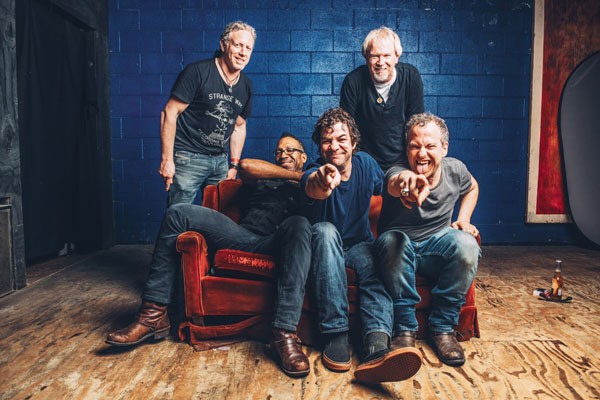 Dean Ween Group — After Ween split up a few years back, Dean Ween went on his own as the Dean Ween Group, which has slowly been adding more and more Ween material to the repertoire. It's not surprising considering that three other members of Ween — Claude Coleman Jr., Dave Dreiwitz, Glenn McClelland — are also in the group. Last time through Charlotte, raves about the group's performance flooded social media, so I would expect more of the same this time around.

Benji Hughes — People expected big things from Charlotte singer-songwriter Benji Hughes after rave reviews hit his 2008 album, A Love Extreme. While he spent time writing jingles and traveling around the country, little did his fans know there was also a shit-ton of music up his sleeve. In 2014, Hughes dropped four albums at once via his Website, including a children's album. If anyone was expecting the Queen City's King of Slow Jams to rest on his laurels, they'd be sadly mistaken. Earlier this month, Hughes announced his signing to Merge Records along with two 7-inch albums due in October and a full length album due next year. Extreme, indeed.