Elysium: Coming down from cloud 9 | Reviews | Creative Loafing Charlotte
Switch to the mobile version of this page.

Elysium: Coming down from cloud 9 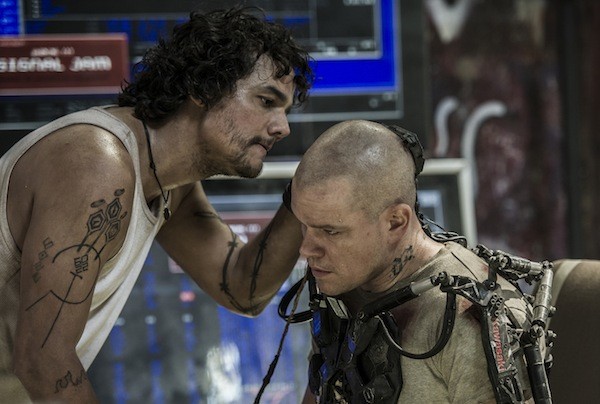 South African writer-director Neill Blomkamp made one of the more noteworthy feature debuts of late with the 2009 summer release District 9, a box office hit and Best Picture Oscar nominee about the wretched treatment of extra-terrestrials who had the misfortune of landing on our planet. The story was obviously a metaphor for apartheid in Blomkamp's home country, and the film proved to be another shining example of science fiction serving as a sturdy framework for a social message.

With Elysium, Blomkamp again tries to mind-meld sci-fi and social change, but the results this time aren't nearly as smooth or satisfying. A futureworld version of the Occupy Wall Street movement, the film takes place in 2154, when the 1% is living comfortably on a manmade space station (Elysium) while everyone else is struggling to survive on a burned-out planet Earth. One of the working stiffs is Max (Matt Damon), whose job-related injury — radiation, wouldn'tcha know — means he'll be dead in five days. Up on Elysium, everyone has a machine that cures all illnesses and injuries, but no one from the earth's surface is even allowed to set foot on Elysium, let alone breathe its rarefied air or use its cutting-edge facilities. Willing to do anything to reach the celestial paradise, Max enters into a partnership with a tech-savvy hustler named Spider (a good performance by Wagner Moura, the star of the Brazilian twofer Elite Squad and Elite Squad: The Enemy Within), taking along his best friend Julio (Diego Luna) for good measure. But to accomplish his mission, which involves downloading valuable intel from within the mind of a sleazy CEO (William Fichtner), Max has to contend with Elysium's defense secretary, the smug Delacourt (Jodie Foster), and her earthbound henchman, the psychotic Kruger (District 9 star Sharlto Copley).

Blomkamp crams his tale with reams of topical material, most of it pertaining to the class struggles dominating U.S. news these days: the heartless treatment of undocumented immigrants, the urban plight of minorities (whereas Blade Runner posited that Asians were primarily the ones abandoned by Caucasians settling on other worlds, here it's mostly Latinos who are left behind), rampant police brutality, and the hypocrisy of those in power (like the vile Republicans in Congress, the Elysium rulers refuse to provide for the poor but of course have free healthcare readily available for themselves). It's potent stuff, or at least it would be if the movie surrounding it didn't take so many shortcuts in terms of its characterizations. Foster and Copley might be playing different types of villains — she's cool and calculating, he's impulsive and destructive — but the end result is the same in that, given the arch performances, it's impossible to take either one very seriously. As for the good guys (no spoilers by naming names), some predictably get to go the route of the (take your pick) sacrificial lamb/martyr/Christ figure, and even the ones that don't aren't given much personality or depth — in short, no robust and memorable Sarah Connors or Han Solos here (heck, not even a Buckaroo Banzai).

Elysium is certainly better than other similarly themed films from 2013 (After Earth, Oblivion), but given the glut of movies that take place decades or centuries from now, maybe Hollywood will give it a rest and refrain from heading back to the future any time soon — at least until, oh, 2014 or thereabouts.