Enemy doubles down on ambiguity | Reviews | Creative Loafing Charlotte
Switch to the mobile version of this page.

Enemy doubles down on ambiguity 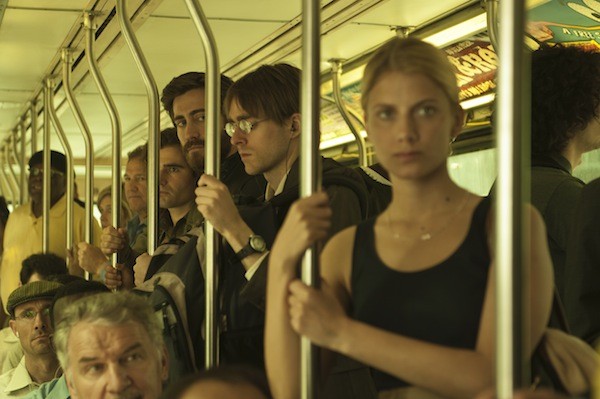 The year's premier WTF? achievement, Enemy is the type of film that will leave most viewers initially dumbfounded as it comes to a baffling close but will begin to work itself out as one repeatedly replays it in the movie theater of the mind. Ambiguous to a fault, it's at least unique and challenging, and in a season largely dominated by imbecilic efforts like Need for Speed and Pompeii — films that go out of their way to kill precious brain cells — that certainly counts for something.

Director Denis Villeneuve and star Jake Gyllenhaal, whose Prisoners was one of last year's best films, are paired again for another thriller, this one based on Portuguese Nobel Prize winner José Saramago's novel O Homem Duplicado (The Double). Gyllenhaal plays Adam Bell, a mopey history professor who spends his evenings sleepily grading papers and mechanically having sex with his girlfriend (Mélanie Laurent). Despite the fact that he dislikes movies, he rents one on the suggestion of a colleague and is stunned when he notes that a bit player looks exactly like he does. Learning that the actor's name is Anthony St. Claire (also Gyllenhaal), a more extroverted type with a pregnant wife (Sarah Gadon) at home, Adam becomes obsessed with meeting his doppelganger.

Scripter Javier Gullón opted to lop off the ending of Saramago's source material, instead sprinting in a different direction — not least by employing heavy use of unsettling spider imagery. Villeneuve adds another coat of eeriness to the story by filming in a manner that suggests fellow Canadian director David Cronenberg (indeed, David's daughter Caitlin Cronenberg is credited as still photographer on this film). The central mystery, of course, is whether Adam and Anthony are complete strangers, somehow related, or actually the same person. There are clues pointing to the (possible) answer, but don't expect to find them all during the initial sitting. Instead, like a spider using its silk to ensnare its prey, they'll spin around in the brain before clamping down with clarity and purpose.