Show us your cans

When your namesake neighborhood is known as Charlotte's arts district, there's a certain expectation you have to live up to, and NoDa Brewing Company co-founder Suzie Ford is happy to do so.

It was Ford, co-founder and co-owner of NoDa Brewing, who recently decided to create an homage to the countless great artists in the neighborhood and city as a whole.

"We wanted to turn part of the room into NoDa and keep in that feel," says Ford. She put out a call for local artists to paint exclusive artworks based on different cans of NoDa beer on a 36x24 canvas.

After narrowing 60 responding artists to 15, she assigned them a can, gave them a canvas, and let them do as they wish.

On Tuesday night, Ford and the artists unveiled the 15 paintings. CL got a first look at the art and reached out to each artist to tell us about their work. 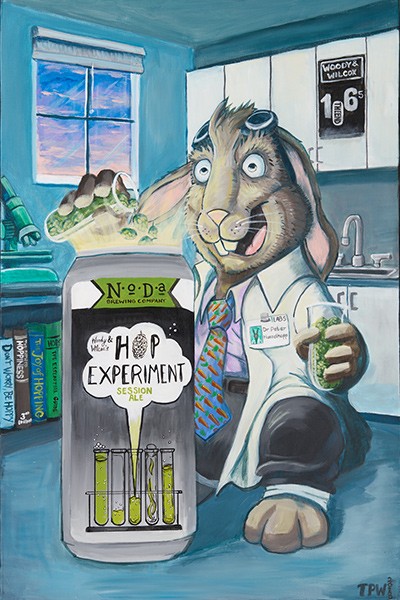 I gravitated toward the Hop Experiment, because I immediately felt the inspiration to paint a mad scientist. That idea evolved as I thought more about the "hop" aspect, and rabbits seemed like a natural fit given that they are sometimes used as test subjects in lab environments. This gave me the opportunity to turn the whole idea on its head and produce something original.

I've always been kind of obsessed with the imagery of space and astronauts and stuff like that. I love the colors that you can use with that kind of stuff. I think it compliments the style of art that I'm doing, where it's a little more graphic and digital looking. I thought about what I wanted to do for a while, before I knew what can I was getting, and I thought that was a cool idea to sort of be reaching out for it. 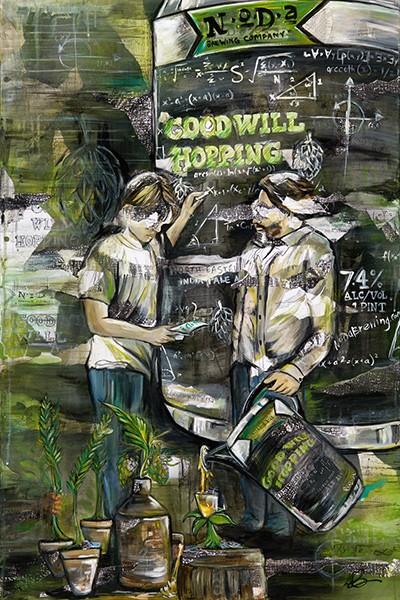 I used my drawings and digital imagery to collage into the painting, making it look more pixelated and pieced together to emulate the grainy effect that chalk makes on a chalkboard. There are hidden things throughout the painting that pay tribute to the movie, but mostly the IPA that the artwork represents and the formulas that NoDa Brewing utilizes to create it. 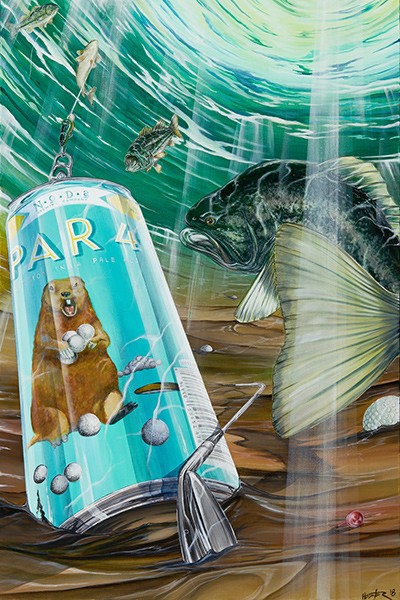 I'm a school teacher at Myers Park High School. What I teach my kids is, go outside of the box. Don't conform to that space that everyone knows is cliché. Make the spectator pick apart what's in that composition. Then also make them believe that that shit can happen. I'm going to make the irrational become rational. I try to pick things apart. I create new light sources. I tried to make people believe like I know what the hell's happening under water. 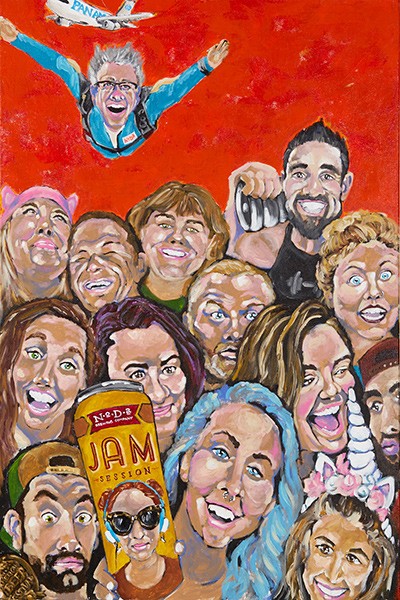 I have been working for NoDa Brewing Company for about 3 years, and when this project came up I was overjoyed. I chose JAM Session because for years we have referred to Lady JAM, featured on the can itself, as resembling our own Lindsay Sprick. I wanted to slightly reimagine the can with Lindsay as Lady JAM. It's a lighthearted piece painted with love (and acrylics) that I think captures our fun loving attitude here at NoDa. 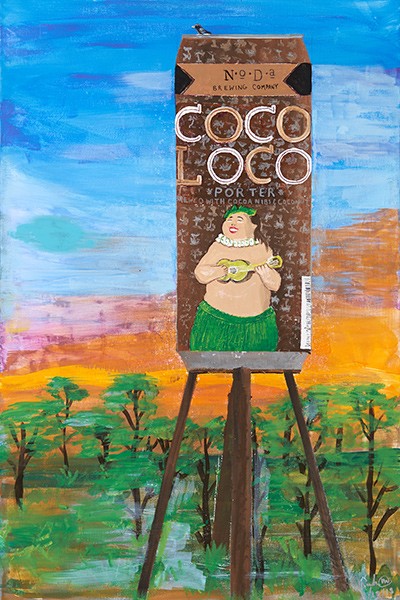 I love water towers. I lived beside one when I was a child and imagined it was my giant robot friend. I initially had a different idea, but the idea didn't touch me emotionally. My wife suggested making the can a water tower and putting it against a colorful sky. Selecting the water tower as a subject has inspired me to start an acrylic paint series I'm calling Water Giants, which will be water towers from my travels and locally. 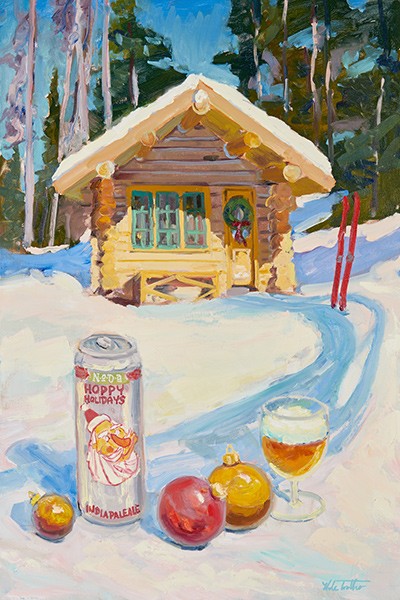 A friend suggested I do the project, and by the time I got word about it, the seasonal holiday brew "Hoppy Holidays" was about all that was left to choose. But that actually made it fairly easy for me, since I love painting snow scenes and am an avid snow skier! "A ski holiday ... sure." That was the idea that came to me. I had just gone skiing in Taos, New Mexico, and done some painting out there as well. 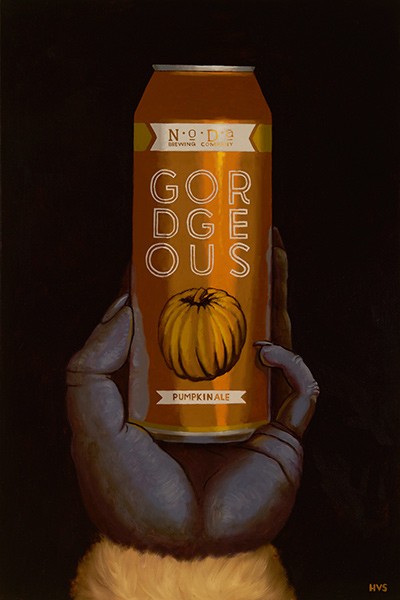 Having lived in and around NoDa for the past 7-plus years, I thought it would be awesome to do one last local project before I moved to Charleston, South Carolina. I picked my can because I liked NoDa Brewing's play on the word 'Gorgeous.' I had a lot fun painting it and I am looking forward to seeing what everyone else made. The can already looked like an illustrative piece of art, and I wanted the challenge of building my painting around that and incorporating it in an imaginative way. I ultimately chose the landscape of NoDa for my background because, not only is it the brewery's namesake, but it's where my career as a painter took off. Also, visually, it offers so many cool and colorful images. I had so much fun creating it. 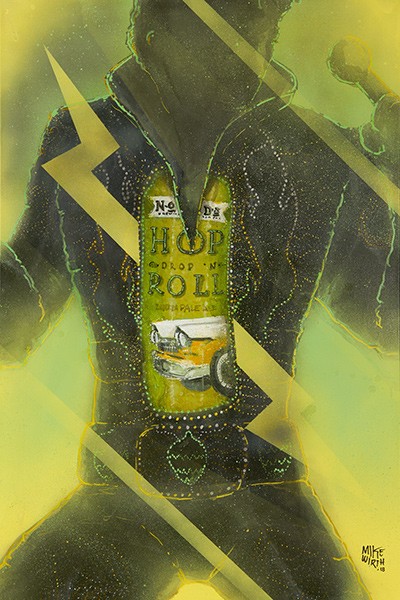 I wanted to capture the thematic spirit of '50's teenage angst that [NoDa Brewing co-owner] Todd and [head brewer] Chad imagined when they collaborated on Todd's recipe, but also honor Chad's late father, who was an Elvis impersonator. My goal was to adapt the can art into an Elvis jumpsuit-styled sequins pattern. I obscured the face to allude that this is an Elvis-looking individual as homage to Chad's late father. 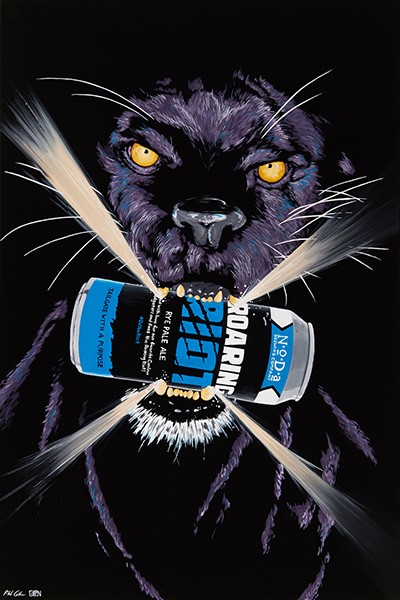 I was one of the last to come by and pick out my beer can, so I was pretty thrilled to see Roaring Riot was still in the mix. As soon as I saw the can was available the first thing that sprung to mind was the Teen Wolf beer biting scene. I'd like to think I honored the legacy of Scott Howard and his teenage lycanthropy or at the very least, Stiles. 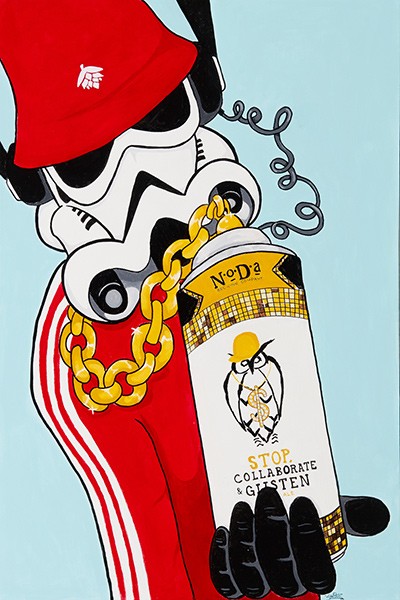 I'm a huge fan of Star Wars and have recently done Star Wars-inspired paintings and thought, "What if I did a hip-hop Storm Trooper?" and the rest is history. I try to create paintings with bold, bright colors with a sort of fun and whimsical twist that some times tell a story. I want to bring a smile to people and bring the kid out of them cause I'm a big kid at heart. 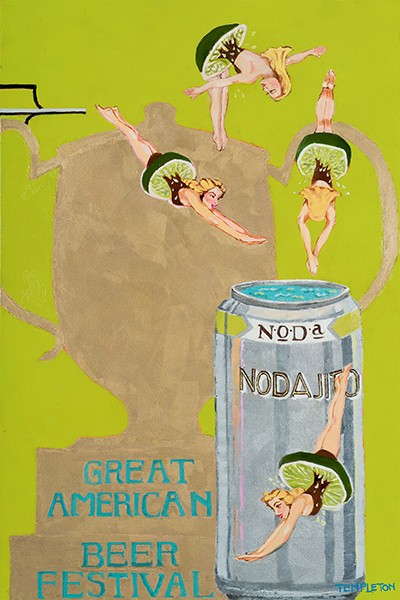 In coming up with my design, I just expanded on the [existing] face of the can. I made the can top look like water and added three more playful divers. I wanted to show that anyone diving into a Nodajito would love some company. In the background, it is important to note the gold trophy indicating that at the Great American Beer Festival, Nodajito won the gold award, proving it's delicious!

My intention was to create a celebratory work of art that hearkens back to the era established by the original CAVU can design and story. Most of my current work is 90 percent abstract with 10 percent illustrative imagery. I blend this percentage of color and material with imagery to bridge the gap between purely non-representational work, which tells no story, and an image that has the potential to trigger an imagined story within the mind of the viewer. 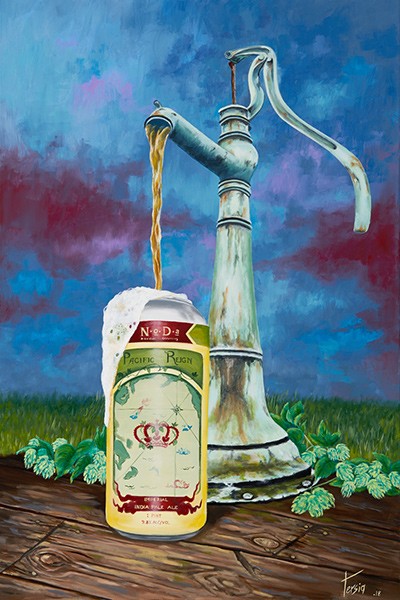 Making the beer can the focus was my main aim, and after 1,001 ideas of what else I wanted to express, two happy thoughts came to mind: an endless stream of beer being supplied and old rusty things. It was mere luck that the old water pump looks kind of majestic and ties in with the name Pacific Reign. I am happy with the fact that I could do something I love that doesn't take away from that sexy beer can.