Exodus: Gods and Kings: The Wrath of God | Reviews | Creative Loafing Charlotte
Switch to the mobile version of this page.

Exodus: Gods and Kings: The Wrath of God 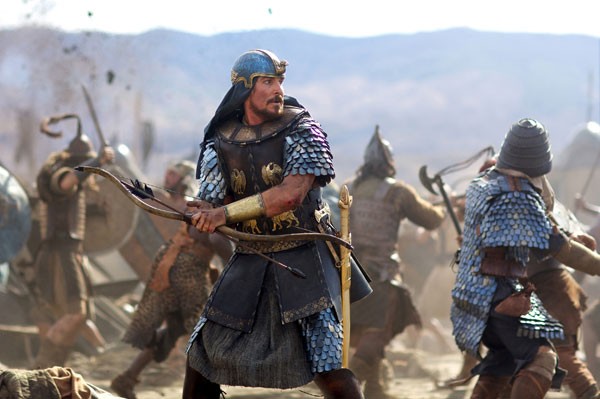 Edward G. Robinson remains one of the greatest actors the film world has ever known, but that doesn't mean he was right for every single role he played. Case in point: 1956's The Ten Commandments, in which he failed to convince in his portrayal of the shifty Hebrew overseer Dathan. Of course, Robinson's performance wasn't the only dalliance with camp to be found in that popular Charlton Heston epic — I always get a chortle out of hearing Nefretiri (Anne Baxter) coo, "Oh, Moses, Moses, you stubborn, splendid, adorable fool!" — and now here comes Exodus: Gods and Kings in an unintentional attempt to match it guffaw for guffaw. The mirth begins with the appearance of the pharaoh Seti, who turns out to be played by that most Brooklynese of thespians, John Turturro. Turturro's generally an exemplary actor, but his turn here is only slightly less embarrassing than when he exposed his bare buttocks in one of those abysmal Transformers sequels. Then again, everyone's ass is basically left hanging out in an often embarrassing spectacle that, to transcribe it into Charlotte parlance, proves to be as insincere as Steven Furtick and as confused as his Elevation Church groupies.

First, let's get the controversy out of the way. Much has been made of director Ridley Scott's decision to hire an all-white cast for the central roles, stating in an interview that "I can't mount a film of this budget ... and say that my lead actor is Muhammad so-and-so from such-and-such." I concede that he's probably right about casting a "lead actor" (although I'd hate to have seen his version of Slumdog Millionaire, with Orlando Bloom as the title character), and a star of Christian Bale's caliber probably was needed to sell this picture. But did every key role need to be cast in such a manner, even smaller parts filled by the likes of Sigourney Weaver and Breaking Bad's Aaron Paul? (And is it just me or is the corrupt Viceroy Hegep, played by Ben Mendelsohn, made up to look exactly like John Boehner, right down to the sickly orange skin?)

I suppose the criticism would dissipate more rapidly if the performances were accomplished enough to draw us completely into the story — after all, this past spring's Noah was scarcely more sensitive in its color-coordinated casting. Yet unlike that Darren Aronofsky effort, wherein the actors gave believable, committed performances, this one is hampered by wretched casting in virtually every role. Bale labors mightily, but he never captures Moses in the feverish manner that Russell Crowe essayed Noah or Heston portrayed Moses in the '56 model — he's less Moses the servant of God and more Moses the first action hero. Joel Edgerton is likewise ineffectual as Ramses — wearing enough black eyeliner to suggest he partly based his character on Meeko the raccoon from Pocahontas, he cuts far too contemporary a figure to ever blend into the period.

Because Scott and his scriptwriting disciples know they have to somehow make a movie that won't turn off hardline Christians (as did Aronofsky's far more outrageous — and far more thought-provoking — Noah) yet also attract more secular moviegoers, they end up with a shallow, surface-skimming film that will satisfy neither faction. To serve as a distraction, a gazillion dollars worth of CGI is tossed onto the screen, but the results surprisingly run hot-and-cold, with the Red Sea interlude especially failing to convince (and, in the "deadly plagues" set-piece, dig those alligators doing their best Jaws interpretations!).

At least the set design is convincing. Much of the film takes place in Memphis, Egypt, and given the ineptitude on display in other facets of the production, I half-expected a scene in which Moses parted the gates of Graceland.