Step up to the mic 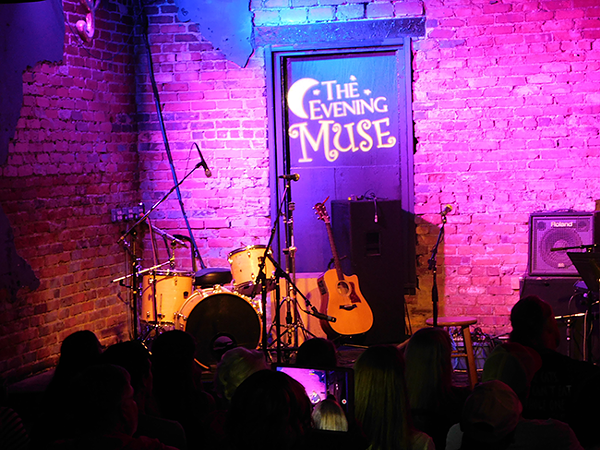 For last year's Music Issue, Creative Loafing put the spotlight on 10 local artists and bands to keep an eye out for in the coming year, including Lenny Muckle's art-punk project Lofidels, R&B singer Dexter Jordan, the Latin-tinged act Quisol and singer-songwriter Randi Johnson. In the year since, all of those artists have issued new music and each has been featured in larger pieces in CL's pages.

This year we decided to turn your attention to a few of the city's open-mic nights, where you'll find even lesser-known artists workshopping new ideas. The 10 open mics listed here represent only a few, but they range from events focusing on singer-songwriters to those featuring hip-hop cyphers, as well as the Blumenthal's eclectic open-mic night that's more like a local version of America's Got Talent, with its lineups of singers, dancers, jugglers, magicians and more.

As Charlotte's music scene continues to grow and develop and gain national attention, new crops of musicians can be seen every week at the city's open-mic nights. So get out and explore them, as the future of Charlotte music depends on fledgling artists willing to get up the nerve to take the mic.

This event, hosted by Dollar Signs' Erik Button, is one of the more popular open-mic nights in Charlotte. "Performers get two songs or 10 minutes, and comedy acts and poetry get six minutes," Button says. The Find Your Muse event has been going for more than a decade and has won "Best Open Mic" in Charlotte for six years in a row. What's more, Button says, "A featured act that is usually a professional touring musician [appears at each Find Your Muse event] to inspire you. We have professional sound equipment and a dedicated sound man." Not to mention an attentive audience there just to see a new group of Charlotte performers make their mark every Monday night.

Celebrating its 20th anniversary, this weekly jam session is also an open-mic night, in which professional, amateur and fledgling musicians can strut their stuff with members of house band the Smokin' Js (James Brock, K. Omari Wilkerson, Chase Killough, Paul Agee and Jason Atkins) as backing musicians. Equipment is provided, and soundman Hooter Hough has been running the board since 2002. (Fun fact: Hough recalls the first rock show he ever saw: The Monkees at Charlotte Coliseum in 1967, backed by an up-and-coming guitar slinger named Jimi Hendrix.) All the open-mic participants have to bring is talent and chutzpah, but be sure to put your name on the sign-up sheet early, because it's first-come, first-served.

About two decades ago, when the Tosco Music Party series was growing from living room sing-alongs to events in larger venues, some folks began to miss the familial atmosphere of the old parties, at which anyone could get up and sing. So three years later, John Tosco began hosting his Tosco Music Open Mics at the newly opened Evening Muse. Beginning with a half-hour sing-along, the event often showcases younger talent, including many of Tosco's students from his day job as a guitar teacher. "Ours is definitely a little more family-oriented, kid-friendly," Tosco says. "It's one thing to have a recital, which tends to be more classical, as opposed to kids who are learning guitar or voice lessons or any other instrument to get the opportunity to perform on a stage at the Evening Muse."

"We combine the old-school experience of open mics with an urban touch to it to make it (more) attractive," Anthony Macklin says. Last November, Macklin, better known to spoken-word lovers as Sir Abstraxxx, partnered with Apostrophe Lounge to launch Eclectic Soul Tuesdays. In addition to poetry and spoken word, Apostrophe patrons can also enjoy live painting from local visual artists, eats by Rondot's Mobile Kitchen, and R&B, trap and eclectic soul played by DJs Blanco or SPK. Just don't expect to hear singing over pre-recorded tracks. Live music is on the Eclectic Soul menu, so Macklin says you have to perform a cappella or with a musical instrument in order to create a more organic sound.

This Radio Rehab event is for hip-hop artists of all kinds, from producers to emcees. According to host Bluz, "The producers' names are drawn randomly and each producer gets to play three to four beats, depending on how many producers we have signed up for that night." Emcees are allowed to drop a sixteen, freestyle or written, over each of the featured producers' beats, and even singers and poets can join the fun, as the event also features a band that interacts with the producers. "This is what we ultimately wanted to happen: Two people, who may or may not know each other, connecting over their common love for music," Bluz says. "It creates a situation where they can go back and revisit the song from that night, get into the studio and really craft something awesome."

When: Second to last Wednesday of each month 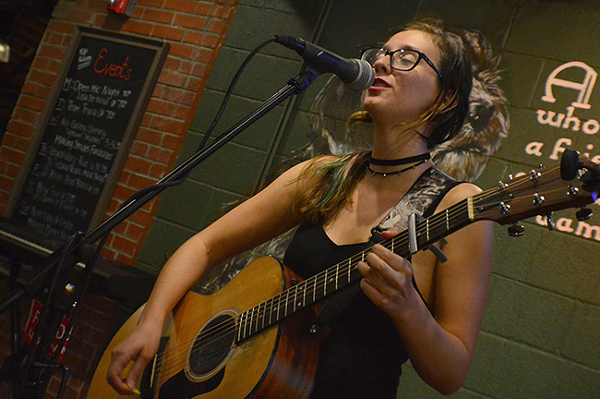 De Novo came up hitting all the local open mics, so it's only natural she continues to cultivate that scene by hosting this weekly event. "Everything is new and fresh," says De Novo, who pushes the acts — most of which are solo acoustic performers — to play original songs, not covers. And what's more original than De Novo's "Word Song," for which she passes a clipboard to everyone in the audience and improvises a song on the spot based on the words they write down? "Theres a lot of people that come by the brewery and don't really know what's happening," she says. "The 'Word Song' is a good way to get them involved." If you can't make her Monday show, she also hosts an open mic at Temple Mojo Growler Shop in Matthews on the first Thursday of each month.

Hip Hop Wednesday does it for the culture every week at Common Market in Plaza Midwood, but the open mic is only once a month. "We rotate between three different themes," host DJ SPK says. "The first and forth weeks [of each month] are concerts featuring indie hip-hop artists from across the country, but predominantly North Carolina. The second week is the DJ Party and features either myself, Earl Grey or a guest DJ. And the third week of every month is our Cypher Open Mic." The rap cypher features one indie hip-hop artist and alternates between a DJ set and the open-mic cypher. The DJ drops a beat and each rapper gets a minute until everyone in the cypher has had a chance to go at it.

When: 8 p.m. every third Wednesday

Where: The Common Market, 2007 Commonwealth Ave.

Hosted by musician Derrick Hines, Wak Wednesday is a quaint open-mic night ideal for artists to try out new music and for novices to gain experience performing for small audiences. It's open to all types of performers, but singer-songwriters tend to show up, with the occasional poet, rapper or instrumentalist added to the mix. Expect a night of improvisational music paired with singers workshopping new songs. "I set up and play for a while, improvising on electro-percussion; sometimes I tell a story or joke," Hines says. "If anyone is there to perform, we sort of nod back and forth. We get two or three performers besides me, so it's rare that a performance is less than four songs apiece." After the performers run through their songs, DJ Nostalgia takes over and spins old-school records on an old-school turntable.

Hosted by the very entertaining Jared Allen, this open mic involves getting up on the big patio stage and belting out your best, because chances are the whole neighborhood is going to hear it. "There is no official sign up form," says Allen. "We play it by ear. Which means whoever gets there early gets to play longer." JackBeagle's makes it easy to party like a rock star. Take the edge off with $1 discount whiskeys or celebrate a successful set with a plate of 50-cent wings. The outdoor vibe guarantees a decent crowd on a hot summer day, so don't fuck up. In fact, aim to be the one whose beautiful voice draws in folks as they wander down North Davidson Street.

This periodic event is the local version of America's Got Talent -- without the judginess. All performing artists are welcome, from singer-songwriters and rappers to poets, dancers and magicians. The only requirement is that it be family-friendly. "We believe that everyone should have a chance to perform on our stage, so Blumenthal's Open Mic is open to performers and spectators of all ages and all skill-levels," says Kacy Connon, Blumenthal's education programs coordinator. "Whether you're performing, supporting a friend who is on stage for the first time, or just looking for something fun to do on a Friday night in Uptown, Blumenthal's Open Mic is a great place to see our community shine."