A Musing on Music, Open Mics and Political Conventions 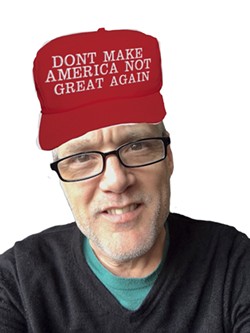 When Charlotte singer Kevin "Mercury" Carter decided to hang up the clothes he designed under his fashion name Kevin Vain and begin exploring his musical talent, he took to the city's open-mic nights to see how his multi-octave voice and songs would go over in a live setting.

That was three years ago. Earlier this month, on July 11, Mercury Carter performed on a stage in Geneva, Switzerland, having been invited to take part in the prestigious Montreux Jazz Festival.

Not every artist who signs up for an open-mic night achieves the success of a Mercury Carter — after all, major talent plays a big role for those who graduate from open mics to world-famous festivals. But a singer, poet, rapper, dancer or instrumentalist has to start somewhere. And that somewhere is often an open-mic night.

For last year's annual Music Issue, we put the CL spotlight on 10 local artists to keep an eye out for in the coming year. They ranged from the R&B singer Dexter Jordan to the acoustic artist Randi Johnson to the experimental art-punk project Lofidels. Since then, Creative Loafing has profiled each of them in longer stories, and each has continued to write and perform.

This year, we decided to turn the spotlight to the spaces where local artists workshop their music — open-mic nights. There are many of them all across the Charlotte area, but we chose 10 that showcase a range of artists, from singer-songwriters to rappers, poets, producers and instrumentalists. Open-mic nights are events where you can see the newest of the new in Charlotte, and maybe even run across the next Mercury Carter.

Also in the Music Issue this year, I have compiled a list of the 10 best local LPs or EPs that have come out since last year's Music Issue, along with a longer list of Honorable Mentions. It's a way of showing the trajectory an artist may take from performing two or three songs at an open-mic night to recording an album worthy of praise. (If you disagree with my choices, tell me about it in the comments section below the story.)

It's often said that Charlotte began experiencing a musical renaissance in the 2010s; if that's so, it doesn't seem to be letting up. And as long as this city continues to produce great new musical artists, we'll be covering those local artists, and not the national acts that travel through town just to play a night at one of the big amphitheaters or arenas.

Speaking of big arenas, it's looking more and more likely that Charlotte will be the big arena for the next Republican National Convention. At a special meeting on Monday, July 16, the City Council narrowly voted in favor of inviting the RNC to Charlotte in 2020.

On the surface, that seems reasonable enough. After all, Charlotte hosted the Democratic National Convention in 2012 and it put the city in a favorable light on the national stage. But beneath the surface are serious concerns. Today's Republican Party is not the 2012 Democratic Party — it's not even the 2012 Republican Party that held its convention in Tampa, Florida, the same year Charlotte hosted the Democrats.

Another event that put Charlotte on the national stage was the 2016 uprising that followed the police shooting of Keith Lamont Scott. That event brought a military-style police force to our streets, leading to multiple injuries and a death.

It's true that the 2020 RNC will put Charlotte on the national stage again, but the question is: Will it be the kind of celebratory stage performance that the DNC was (even with the protests that came with it), or will it be a tragic stage performance that will make the 2016 uprising look like a mere dress rehearsal? Those are questions City Council members debated among themselves and the community, and they decided the attention the RNC will bring is worth the gamble. We can only pray that was the right decision.

No matter what happens, Charlotte's artists — its singers, songwriters, rappers, poets, actors and painters — will respond in their works at local galleries, breweries and music venues — and at open-mic nights.