People seem to have this great big misconception that because a food has history, that must mean it's automatically healthy. "They've been eating it for 500 years! It MUST be good for me if people ate it before telegraphs were invented, right?"

No. No is the answer to that question.

You know why people ate dumplings, cornbread and anything else fried or cakey? Because it was all they had. They didn't eat those things because it was a "treat" for managing to stay conscious on a treadmill for 15 minutes before run-walking to the nearest open food court. They ate them because they were the only accessible things they could get their hands on that would let them keep farming for 18 hours a day, not because they "deserved" it. It was about survival, people.

So when the Israelites holed themselves up in a temple for eight days with only a single menorah to rely on, they ate latkes because it was all they had access to. Potatoes, oil and a few eggs. That's it. The applesauce came later, I'd imagine.

The author kindly requests you ignore his last name after reading the preceding paragraph. Seriously, just ... pretend it's not there or something.

(This family recipe's for two people, since apparently it was written for the saddest Hanukkah of all time. If you're making it for more people, just double or triple the ingredients. )

Directions
Make the applesauce first, since you want that cooling off while you fry up those latkes. Peel and core the apples (bonus points if you have one of those hand-cranked apple peelers, woe to you if you don't), then cut them into one inch pieces. 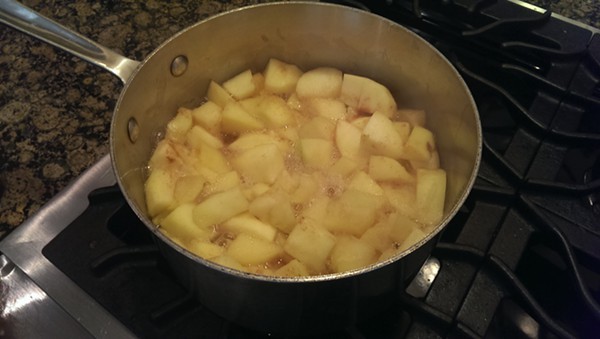 Get a large pot and add the apples, sugar, water and cinnamon. And don't try to get all smart with me and prep all this stuff early, or you're going to end up with some brown-ass apples on your hands. Peel them right before they go in the pot, people.

Stir and bring everything to a low boil on high heat, then bring it back down to a low simmer and cover it for 15 minutes. Make sure you stir it every once in a while, too.

After the 15 minutes is up, use a potato masher and turn those apples into applesauce.

Once that's done, put the applesauce in a bowl while you make the latkes.

Peel and grate the potatoes. Make sure you use the biggest holes on your grater; you're grating the damned things, not zesting them.

Put the peeled potatoes in a bowl of cold water and let them soak for 15 minutes.

While the potatoes are taking a bath, add the onions, flour, salt, pepper and egg to a large mixing bowl, and mix them up.

Take the potatoes out of the water and dry them off in a colander. Next, put them in a kitchen towel and wring the ever-loving shit out of them. Seriously, if you think you've wrung them enough, do it more. And quit complaining about your hands - it's not like you needed them for anything better.

Add the potatoes to the mixing bowl and mix them in.

Get a large skillet and heat up your vegetable oil on medium-high. 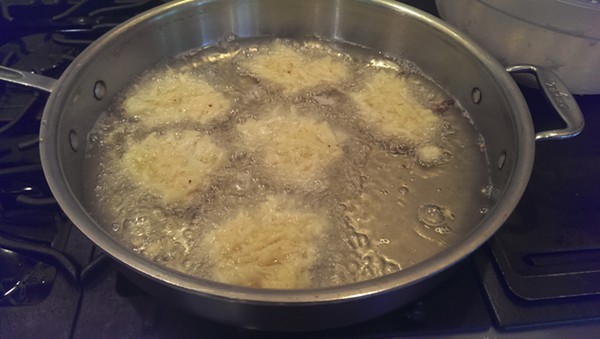 Use a pair of tongs to put some of that potato stuff into the hot oil, making sure you don't crowd the pan. Make sure you flatten the latkes too, otherwise you'll just have hot potato balls on your hands. Probably still tasty, but not nearly as delicious-sounding.

Cook the latkes for 2-4 minutes, then flip them over for another 2-4. If the undersides look golden, then you're golden.

Once the first batch is done, put them on some paper towels to dry, and keep the rest frying until they're all crispy and delicious.

Serve them with the applesauce (or sour cream, if you're that kind of person), and eat up.

Eat up some beats too, coming straight from Robert Glasper this week. Check out Jesus Children:

Despite my egregious butchering of Jewish history up there, I think you get the message. Yes, it's delicious, but just because people fried it up thousands of years ago doesn't mean it's any less fried and/or oily. Enjoy some historical goodness this holiday season - just don't tell me it's going to shave off my waistline while I do it.

See you next time, eaters.