Under the Carolina Sun 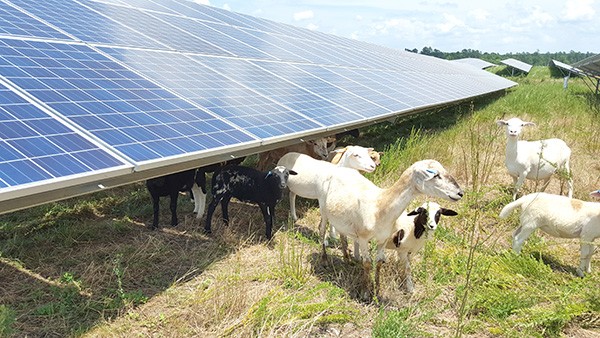 Area chefs know the company as a purveyor of delicious lamb products, but Sun Raised's livestock serves as more than just a food source. The company is a key player in a symbiotic relationship between modern technology and one of mankind's oldest occupations: farming.

Though the farm's logo features a sheep silhouette, they are not technically the company's principal product. "Sun Raised manages the grounds for these solar farms," says sales representative Brooks Mixon. "We've got a network of farmers across the state, from Murphy all the way out to Edenton in the east."

At most of the 28 sites in that network, the management is done by sheep. The animals get a free lunch while they trim grass and weeds that would otherwise shade the panels collecting energy from the sun. Most of them are owned by the farmers who graze them, but Sun Raised has its own flock on a model farm in Montgomery County. Here, 230 animals browse 123 acres arrayed with iconic silver-trimmed blue panels. Those panels, and the land they sit on, belong to Cornelius energy company O2 emc. 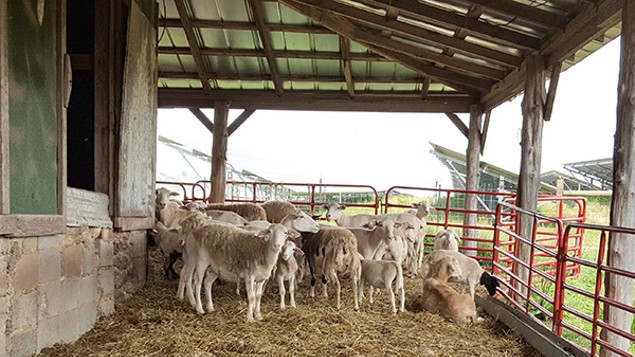 Company owner Joel Olsen may be in the business of harvesting energy, but he evinces an equal enthusiasm for the other farming on his land. "I saw this happening in Europe before it happened here," he says. "The whole idea of sustainability is not just generating clean power. If you can generate income for local farmers on the same land, having that dual use, that's when things start getting very interesting."

The cost to his business equals that of a tractor-based mowing crew, but the sheep farmers bring added benefits. "Compared to most solar farms, [where] maybe four times a year someone drives by, we've got someone on it every day," Olsen says. "If wires are hanging down or something, they know it."

In turn, the solar array helps create superior forage for the sheep. About a third of the pasture lies in shade cast by the panels, creating microclimates that encourage more varied growth. According to one farmer, that can offer sustenance for four times the number of animals than traditional pastures. The Montgomery farm was formerly a staged hunting ground, after previous attempts to cultivate tobacco failed. Today, as Olsen says, "We created 123 acres of agriculture that didn't exist before."

Those additional acres mean a lot. For most farmers, the cost of land is the single largest obstacle to success. According to Olsen, the typical annual lease for farmland in this state is about $75 to $100 per acre. Multiply that by the average farm size of 171 acres, and you're looking at an annual cost of $15,000 in a business with one of the tightest margins around.

Through the program administered by Mixon and grounds maintenance supervisor Brock Phillips, that obstacle is removed. Once contracted to manage a solar site, Sun Raised offers sheep farmers the pasture free of charge. The farmers can sell the animals at auction, or take advantage of the company's sales team that markets their own branded salamis to farm-to-table restaurants in the area.

It seems like a simple enough setup — throw some sheep on the ground, let them eat all that free food, profit! But of course, it's not that straightforward.

"Managing a sheep farm requires a good deal of time," says Mixon. The animals must be moved every two weeks between sections of pasture, encouraging them to eat as much errant foliage as possible. They need water daily, worming medicine monthly, and the occasional doctoring for hoof problems. They also get some additional feed, to help fatten animals for market. 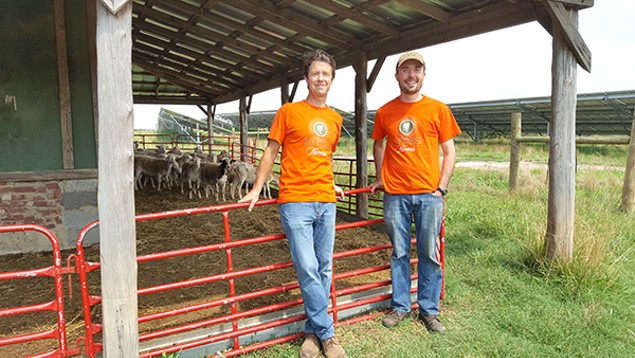 All that handling makes the sheep surprisingly friendly. The mix of English Dorper and American Kitahdin breeds that grazes the Montgomery site come readily to a lyrical "Eeee-oooo" call, replying with loud, throaty cries. They sport a mélange of coats, from white to dark brown, that do not require shearing, helping them survive warmer climates.

Here, a full-time farm manager cares for the flock, while Phillips works on refining the final product. The goal is to improve the strain for larger, more marketable animals that will thrive in our hot summers. For the moment, Sun Raised offers only three salami products, primarily to chefs serving farm-to-table fare.

Clark Barlowe of Heirloom restaurant was one of the first Charlotte chefs to taste the salami, and was so enthused he ordered an entire case on the spot.

"It has a fantastic texture," Barlowe says. "It's not a very gamey lamb, so it works really well for this style of product."

Matthew Krenz of the Asbury appreciates the "bright" flavor of the hot soppressata that stands out from the more traditional pork version.

"It has a really clean finish, so you know you are eating lamb," Krenz says.

Both chefs also cheer the sustainability behind the salami.

"I think it's brilliant," says Krenz. "I love what they're doing!" Barlowe hopes to eventually purchase whole lambs, and has already planned an on-site butchery demonstration to show others how to make the most of this local product. "I love the program so much that I want to support it," he says.

Back at the farm, Olsen shows off improvements underway that will help Barlowe do just that. Rental cabins; plantings of muscadines, apples, and blueberries; and a commercial-grade kitchen will create a destination space for dinners, cooking classes and corporate getaways. All this to add another layer of sustainability for a languishing local economy.

"For too long the rural areas of our state have just been neglected," Olsen says. "We're doing something here that is going to be innovative."

While work remains to be done, positive energy hums in the air. "It's a long learning process, but something we're dedicated to," says Mixon.

With so many active players, it seems this collaboration has plenty of sunny days ahead.