Four years ago, Jossie Perlmutter was understandably nervous. Young and untried, she was about to take the reins of her own pastry program at the new Heirloom restaurant. In 2013, Perlmutter had moved to Charlotte from Maryland for the job, after intensive study at France's Ecole Nationale Supérieure de Pâtisserie. But Heirloom owner Clark Barlowe's concept ran counter to what Perlmutter's instructors had advised: he expected to change his menu every two days in the interest of seasonality.

Oh, and by the way, Perlmutter was younger than her new assistant.

Not only did the young chef rise to the challenge, but Perlmutter and her then-assistant Anne Marie Stefaney formed a highly successful team, developing four creative new desserts every week. Since then, both women have gone on to successively claim the title of "Pastry Chef of the Year" from the North Carolina Restaurant and Lodging Association

"I credit Heirloom with giving me the most experience," Perlmutter says today. "It forced me to experiment with different techniques, textures, flavors. It was a great way to take everything I had learned in France and apply all of it."

Perlmutter's collaboration with Stefaney demonstrates Charlotte's culinary reputation for collegiality over competition, yet some absences still glare in the kitchen. Of the culinary teams serving our most respected fine-dining establishments, few are led by women. Sure, there are women owners and managers, and many, such as Katie Kindred and Jessica Annunziata, have been essential front-of-the-house partners to their chef husbands. But of Charlotte Magazine's top 25 restaurants last year, only one, Flipside in Rock Hill, boasted a female head chef, co-owner Amy Fortes. 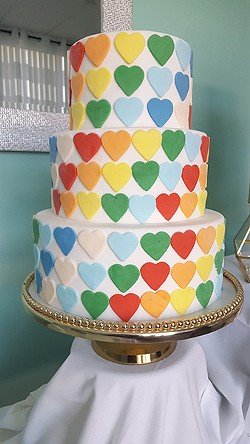 If you're one to stay for dessert, though, the field widens. Pastry chef Ashley Boyd of 300 East and Heritage Food & Drink has drawn attention and plaudits for her sweet artistry, accompanying a Charlotte all-star chef team to the James Beard House in 2016. Hers may be the only name familiar to many Queen City diners, but a new generation is rising: they're young, they're pastry chefs, and they are women.

After her stint at Heirloom, Perlmutter's talent and growing skills took her to The Asbury in Uptown, then to Block and Grinder in Mooresville. At the same time, she began building an independent future, launching her own cake-focused catering business, Sweet Affairs, in 2015. She also cultivated a small network of peers, and last year inaugurated an annual charitable event, Sugar Shock, featuring multiple dessert courses in a sweets extravaganza. Two years in the planning, the event included other local female pastry phenoms, including Boyd protégé Miranda Brown, Luca's Sam Dotse, and the Fig Tree's Samantha Allen.

At Fig Tree, Allen has been quietly pushing out her own artistic interpretations of classic dessert flavors. From brownies to Napoléons, Allen's sweets are novel yet familiar, and her plating stands alongside any in the city.

"It was either painting or baking, and I figured baking was more lucrative," Allen says, only partially tongue-in-cheek. A graduate of Charlotte's Johnson & Wales, she has been baking professionally since her teens, including stints at Amélie's and Something Classic Catering. Three years ago, Allen threw her hat in the ring at Fig Tree to escape a corporate job. "I didn't really think I could get it, but I was like, 'Try anyway,'" she says.

Seated at a rustic picnic table on the covered front patio of Common Market's Oakwood store, Allen and Perlmutter tell similar stories. Both are young women who studied and worked their ways to respected positions in the pastry world, and both have launched dessert-centric businesses.

Allen announced the opening of her Wentworth & Fenn this summer, and the company's Instagram feed bears witness to the baker's artistic tendencies. It's no surprise that the two women quickly became connected in Charlotte's small-town culinary world.

"I think we 'liked' each other's stuff back and forth on Instagram," Allen says. "And then when [Perlmutter] started Sugar Shock, she approached me and a couple of other people. It just snowballed from there."

The two became close enough friends that Allen provided cakes for Perlmutter's bridal shower and wedding in August. That mutual support in a male-dominated industry has helped the women take the next steps into creating business on their own.

"We have a pretty supportive community, more so than savory chefs," Perlmutter says. "We all came out of fine dining restaurants, going in to make our own bakery in some way," she says, speaking of the current crop of independent-minded female bakers. "So being able to talk to people going on a very similar path is extremely encouraging."

Allen concurs. The coterie of female pastry chefs, she says, is "very inspirational, seeing all the stuff that they post. Jossie is so encouraging, and her stuff is so beautiful, so I'm like, 'Thanks for complimenting my stuff!'" She laughs. "I think it goes full circle."

Perlmutter plans to keep that circle turning. Based on her own experience, she rented kitchen space for Sweet Affairs with the intention of fostering other budding businesses.

Since rent is not Perlmutter's primary revenue source, she is able to offer competitive rates, and having a baking-only kitchen simplifies health inspections and all but eliminates the potential for flavor contamination. When she began seeking out potential tenants, she says, it took no more than two weeks to fill the roster. Today she hosts six other small companies in her space off Monroe Road.

One of those companies that has begun to flower is La Piccola Gabbia, playfully named for owner Gabija Janceviciute. When the native Lithuanian met her Italian-speaking husband, he mentioned that her first name resembles the Italian word for cage. Once back in the United States and married, Janceviciute put her law career on hold to pursue a lifelong dream of baking. She started her company in September 2016. 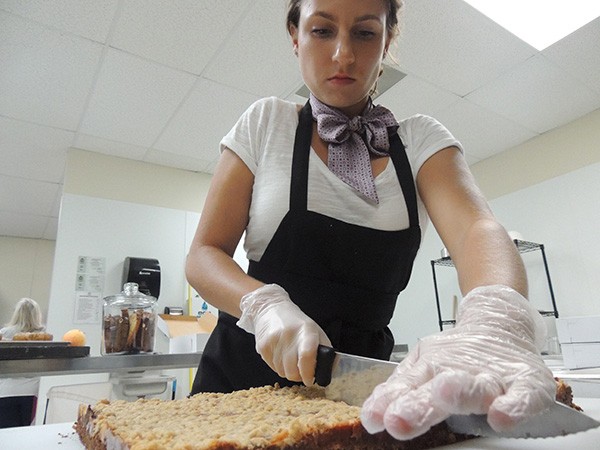 "We wanted to have something in the name that represents our love story, and our story in general," Janceviciute says.

And so, La Piccola Gabbia, which translates as "the little cage," was born.

A long way from cold-calling stores with samples in hand a year ago, today Janceviciute delivers her European-style pastries to Charlotte favorites like Reid's Fine Foods, Pasta & Provisions and Uptown hotspot café Coco and the Director.

The vivacious baker currently sells to 14 locations, and estimates she can easily add another 10 with the space available in Perlmutter's kitchen.

"She has been great to help grow my business," Janceviciute says of Perlmutter. It helps that these business-owning bakers can do their jobs without having to worry about running up costs of time and equipment. "I can go in and work there and not feel stressed out," Janceviciute says.

Getting a toehold with Perlmutter also has brought Janceviciute benefits beyond a financial break. "It's nice that we all are bakers there, so there's no extra food — no meat," she says. "It feels cleaner and more sanitary."

Chef Janceviciute admires Perlmutter, and working with her has helped her own development. "She is my mentor," Janceviciute says. "It's just been really nice to watch her work and learn from her."

Allen also hopes to spread the love, but her direction diverges from Perlmutter's. Allen plans to open a Wentworth & Fenn retail space as a gourmet bakery and wine room, and while she won't have kitchen space to rent, she will eventually have employees.

"I want to bring back [a situation] where people enjoy going to work again," Allen says.

She also sees the importance of building community ties, whether through supporting local farmers or participating in events like Sugar Shock.

"If you give, you'll receive so much more in the end," Allen says.

Based on these chefs' experience, Charlotte is primed for a sweet renaissance, with more restaurants spending the time and money to make desserts in-house.

"Even if it's something as simple as someone putting pound cake and ice cream on a plate, I think people are starting to focus more on their dessert menus," Allen says.

And as Perlmutter points out, "That's the last thing that a customer is going to remember about the meal."

Perlmutter, Allen and Janceviciute may be stepping outside the mainstream restaurant world, but they seem primed to catch the next culinary wave in Charlotte. With a strong network of peers, and a desire to offer support to their professional heirs, their success bodes well for all of us. Wherever their careers take them, we can count on a sweet ending.