And Theatre Charlotte tilts with windmills 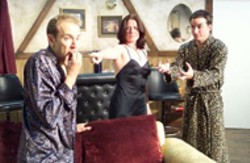 What's a French farce doing in rural Connecticut? I'd estimate about 25 miles above the speed limit at the SouthEnd Performing Arts Center. But although BareBones Theatre Group's new production of Marc Camoletti's Don't Dress for Dinner is criminally fleet, you're going to enjoy the unpredictable ride -- and every kinky twist of the road.

Many farces accelerate to full throttle. Not this silky baby, deftly Americanized by Robin Hawdon in his high-revving adaptation. Camoletti spends no time on neat exposition. We learn the situation on the fly, as scheming husband Bernard hurries wife Jacqueline out the door for a weekend with Mother -- hopefully before Bernard's mistress Suzanne arrives at the summer cottage for a lusty tryst.

When you open the front door in farce, the wrong person nearly always enters. Instead of Bernard's sizzling fashion model, we encounter his best friend Robert -- the perfectly wrong person to cover up for Bernard because he's carrying on a torrid affair with Jacqueline! Of course, Robert's arrival inspires Jacqueline to swiftly trash her junket to Mother.

You can see how impossibly Robert is caught in the middle, covering for himself and his best friend. But what's even more delectable about the rapidly multiplying complications -- aside from the sexy sleepwear from costume designer Barbi VanSchaick -- is how Camoletti forces us to share in his characters' confusion. All five of the main characters are mistaken about at least one other person onstage. So are we, and the speed of the shifting subterfuges -- plus keeping track of who thinks what at any given time -- compounds our vertigo.

With Brian LaFontaine and Mark Scarboro as the deceitful buddies, director Lon Bumgarner can push the pedal to the metal in his pacing. LaFontaine as Bernard is coldly calculating one moment, a study of frenzied panic the next. Seething resentment at the ruination of his lecherous scheme transforms believably into a murderous jealous rage over his wife's infidelity -- brilliantly crystallizing the core absurdity of his adventure for our examination and delight.

Scarboro scoots through the tangled web of Robert's deceit with admirable agility, so charming in his befuddlement that he almost comes across as innocent. Here, however, Bumgarner should have varied his pacing to keep the farce centered on Robert. We don't get a sense of ceremony and crescendo as Robert must pay out more and more money to paper over his misdeeds and betrayals.

The women deliver plenty of thrills during our joyride. Kate Leahey isn't quite the mirror of Bernard's absurd hypocrisy as Jacqueline, but it's a constant joy to see her deceived. As the opportunistic Suzette, Chandler McIntyre is more loopy and comical than we've ever seen her, by turns tipsy, wanton, mercenary, and yet -- contrasting beautifully with Robert's baroque prevarication -- a paragon of simplicity and common sense.

Arching her back and slinking for all she's worth, Tonya Shuffler is sufficiently toothsome and seductive as the semi-sophisticated fashion siren Suzanne. Both Shuffler and McIntyre (along with LaFontaine and Scarboro) worked with Bumgarner last fall on The Laramie Project, which won CL's award for Best Drama of 2002. Bravos to Bumgarner for showing his confidence in these fine actresses in radically different roles. What they achieve here will open quite a few eyes.

No surprise in the rhino elan flashed by the inimitable Peter Smeal as Suzette's biker hubby George. With a smallish stage to work with, this able cast can't always whip up the physical excitement to match the verbal and situational tumult. Bernard's raging fit, brandishing barbecue tongs, is a nice start. But Smeal's mountainous arrival with ringed nose and metallic red hair kicks the action into overdrive. Everyone gets to scurry around the set in a mad aerobic rush of panic and adrenaline. This redheaded rampage makes a fine cherry topping for BareBones' zany romp.

You can't be too optimistic when you hear that Theatre Charlotte has brought Man of La Mancha back to Queens Road. Peter O'Toole and Sophia Loren didn't do the 1965 musical any favors when they butchered Mitch Leigh's score onscreen seven years later. That Hollywood bomb often appears on critics' worst-ever lists. Nor was the previous Theatre Charlotte version of 1993 a harbinger of success. That lugubrious effort brought out dimensions of gloom and misdirected sentimentality that even the film hadn't touched.So I'm very pleased -- and surprised -- to report that the current TC revival, piloted by executive director Candace Sorensen, mostly hits the mark. Credit goes to the three principals who portray Quixote, Panza, and Aldonza, together with a design concept that gives a sunnier balance between the oppression of the Spanish Inquisition and the flights of Miguel de Cervantes' imagination.

Making his Charlotte debut in the title role, James Kidd brings a fervor to Quixote's quest and delusions that evokes the sanctity of El Greco's paintings. Physically massive, the strength of Kidd's voice matches his presence in the oft-reprised "Impossible Dream" and ignites the show in the opening title tune. There isn't much difference between the oppressed Cervantes and his famed Knight of the Woeful Countenance, but there's enough to keep Dale Wasserman's wobbly book coherent.

Besides, there is contrast galore between the sculpted majesty of Quixote and the impish servility of Stan Peal's diminutive Sancho. Peal humors his master with an eagerness lightly dusted with cowardice, and his solo on "I Really Like Him" has a loud dopiness that's irresistible. Other moments to treasure are the little toots from Sancho's hunting horn and the deferential way he parks his hobbyhorse.

Although Lisa Smith begins inauspiciously as Aldonza in "It's All the Same," a song that falls uncomfortably high in her range, she develops into an effectively wanton tavern wench -- with a nicely gauged mixture of contempt and fascination as Quixote's Dulcinea.

James K. Flynn as the judge in Cervantes' mock trial and Corey Mitchell as the barber are the standouts among the supporting cast. Sorensen has cast this show beautifully, but she does make mistakes. The thin orchestrations, colored with flute and guitar, work better on the uptempo and comedy numbers than on the signature "Impossible Dream." She inserts the intermission in a lame spot and tries to sneak Mitchell back onstage after he's been executed.

The atmospherics more than make up for the lapses. Putting the band upstage works beautifully all evening long. More important, the chemistry between Quixote and Sancho is perfectly tuned.